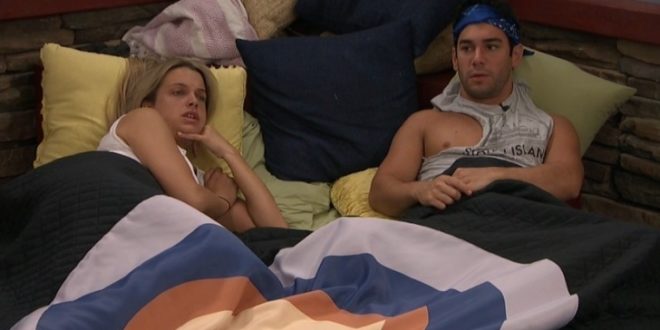 Fourth of July break is over and now it’s time to get into business with Big Brother. This is typically around the time things start heating up on the feeds because the honeymoon period is just about over and things are becoming real. This is also the time when alliances really start to crumble, so look for Gr8ful to start crumbling and turning into smaller side alliances.

As we learned from Mel this morning, a lot of uglies have been bumping in this house (wtf) with Sis and Jack hooking up, Nick and Bella hooking up, and Jackson and Holly about to hook up after he already hooked up with Kat pre-feeds.  I’m sure Bella is going to be fuming if she finds out that Nick told Jack because she is pretty terrified of her mother and there is 0 chance her mother would approve of her hooking up in the house.. nevermind in a room full of people. Good luck to Bella when she’s off the show RIP

It’s the veto meeting day in the house but I am not really expecting any fireworks. Everyone pretty much knows Sam isn’t going to use it so they’ve been prepping for this. The fact that they know whoever leaves will stay in the house lessens the sting even more. With a 25% chance of returning plus still getting to hang with their friends, this eviction should be pretty drama free.

Alright, let’s get to some updates. First some plugs: