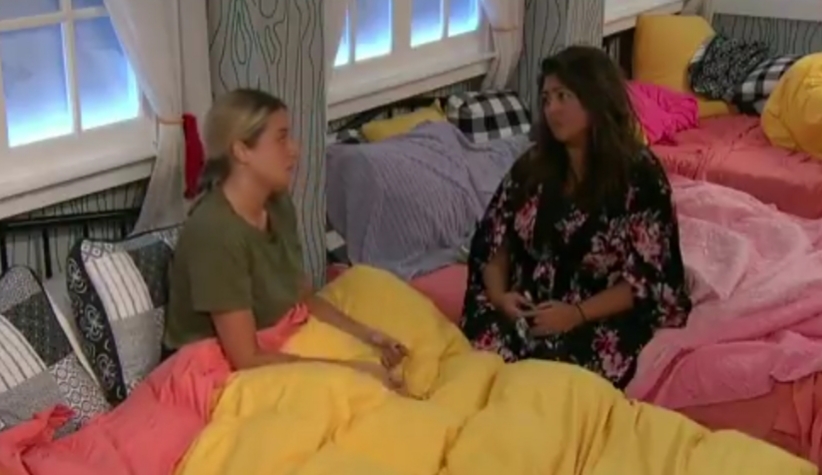 Good morning BBJ fam! Before I recap, I want to address how much I pick on Beth. (Holly) I’m not age shaming her but a few people may have taken it that way. I’ve said in a recent recap, I didn’t care if she was 31, 35 or 55. The thing is, I can’t repeat myself all the time when saying these things, on every recap in order to make a joke. If I did that, these things would be longer than they are now. If you’re reading one recap but don’t usually follow the others, you may not get what I’m saying on that particular day and I can live with it.  I wanted to address it today at least and it seemed appropriate because…..I turned 50 today! (See, I’m not age shaming and I’m also putting my own business out there for the world to know)

Yesterday was another slow one in the BB house. Even with a veto meeting, there wasn’t any drama because the result was expected since Jackson already told Nick he wasn’t using the veto. Nick did a little campaigning yesterday but I expect most of it to happen in the next couple days. Once he sees what he’s trying isn’t going to work, things may pick back up. Christie’s already said she isn’t going to do much this week except lay low.  She doesn’t plan to go after Nick unless he starts “lying to everyone.” (This means if he starts campaigning aggressively)

Nick’s game is terrible this week but most of the house has made some mistakes this week. He’s mad at Tommy and he’s making it a personal thing for now instead of using it in the game.  If  he’d only attempt to blow up Tommy’s game, he’d have a better chance to stay, especially after the work Nicole put in yesterday.  I’ll go over this after I do a quick recap of the game play.

But first…. I have a question? Do we get so locked in sometimes to not liking a cast, we lose the ability to see a change in the game when it comes around? There has been really good game activity lately, some bad play but also some decent play.  I’m assuming that’s the reason (for me at least) it took me longer to realize the 2nd half of this season has been pretty good.  When do we ever have 8 people left that can make a case (most of them) to win?  I’m finding myself liking the last half of the season, despite who the players are. We’re seeing very active game play with a lot of moving parts and that’s good BB. Sure, it’s better when we have this combined with amazing players or people we like but we rarely get all of that anyway. I can settle for some of it.

It looks like Nick will leave on Thursday (unless it’s a reset week) but because it could change, it makes this season pretty good.  I’m able to get on here and rant about the things I don’t like about them and their game which allows me to get it out of my system and still enjoy the game. It just took me a bit longer to get on board this year. I hope that works for you all too. It should, because our BBJ group keeps me in stitches with their snarky comments (that’s a compliment by the way) so there’s a lot of venting going on.

I mentioned a lot of them made mistakes this week. Here’s my thought on the game play at the moment:

Nick: Nick has used the wrong strategy from the moment he got the prankster power and so far, he continues to use the wrong one.  He may be mad at Tommy but he doesn’t seem ready to cut him loose. If he could translate Tommy not voting for him into them not working together in the game anymore, he could possibly do what he needs to do to send Christie home.

Nicole: She may have made some progress with Jackson and Beth but she doesn’t need to be campaigning for Nick to stay. At most, she needs to help Nick prepare what he needs to say and have him go do it.  I don’t see this hurting her game as of now because she’s able to be seen as sweet and emotional. Jackson and Beth just think she’s having a hard time being disloyal or voting anyone out.  If she continues to do it too much though, she could see herself being traded for Jess as a F4 option.

Tommy:  He shouldn’t have told Nick this early he was planning on voting to keep Christie. He told him this even before Monday and the veto ceremony. If Nick is smart enough to see the play, Tommy gave him the ammunition for Nick to turn on him.

Christie: It may not seem she made mistakes since she’s staying but her reaction to Beth about being used as a pawn was bad.  It’s one thing to try and get out of being used as a pawn but her reluctance and so soon after being saved, sent up red flags for Beth. They were actually planning on working with her for a little longer. Now, she’s their next target if Nicole doesn’t get it switched to Tommy. Once Nick leaves, I don’t think Nicole will care as much if it’s Tommy or Christie first.

Beth: She should’ve waited to see what was happening as far as interference with her hoh before she told Christie she might go up as abpawn. There wasn’t a reason to tell her when she did. Christie may have flipped quickly anyway but this guaranteed it would happen. Christie’s already told Tommy she will go after  Jackson and Beth because the way she sees it, she paid her debt. The prankster put her up and not Beth but she knows Beth was going to do it and that’s close enough.

The winners this week are Cliff and Jess. Jess is getting out someone who is after her, as long as he goes and Cliff keeps moving further down the target list.  In a way, everyone is playing the same game. Jackson and Beth are working with Cliff and Nicole wanting them to take out Christie or Tommy, while fake working with Christie and Tommy. Christie and Tommy are fake working with Jackson and Beth hoping Cliff or Nicole will want to split up the shomance for them. Cliff and Nicole are trying to play the middle hoping those 4 knock out each other.

Nicole and Cliff don’t want to go to the end with a shomance that also wins comps but after making a F4 with them to buy time, (Nicoles isn’t official) they need one of them knocked out by somebody else. A lot rides on the next hoh and as of now, Jackson wants to throw it. That may change if he keeps getting more paranoid over Tommy.  I honestly think the season should play out pretty well no matter who goes home this week.

Have a great Tuesday.