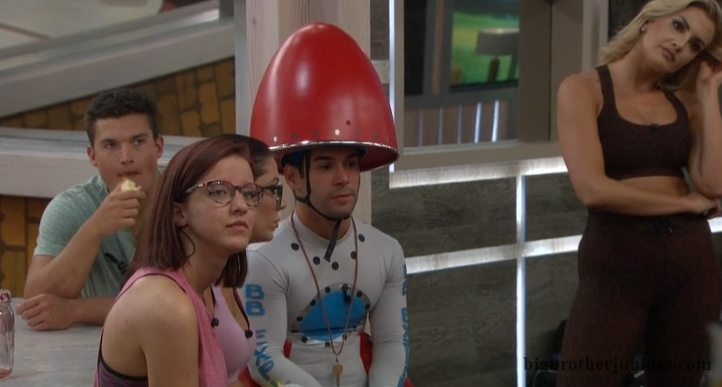 So, that happened. Tommy is HoH now. Yay? Prepare for a weird week ahead, especially with that field trip coming up real soon which will put a third person on the block. Seeing as Jack is out and Tommy is safe, whatever polls have been going are now down two spots. This means if say the current rankings looked like this:

That means Christie, Jackson, and Cliff are now doing the field trip. So, you’d better hope that people spread out their votes and didn’t forget Analyse or Holly (assuming you’re not a fan of that side of the house).

As I posted in my other thread, my stomach is killing me tonight, but I wanted to get a new thread up before bed. I do want to talk about that interview. You know which one.

What in the world was that all about? Talk about awkward. We had an episode that played up Jack as a fun good guy with the alien then he’s completely blindsided on stage by Julie. Not just slightly blindsided, she showed clips(!!) of things he said. I don’t even think they did that with Aaryn or other douchebags. Now, don’t get me wrong, I don’t really have an opinion on what Julie actually did, but it just seems like selective outrage. I’ve watched so many hours of feeds and have noticed people say some really questionable things that are quickly forgotten and certainly not brought up during the exit interview. However, Julie just decided to take out all her frustrations on Jack.

Then, she goes ahead and finishes the interview by using a derogatory term! C’mon, Julie.

“Let me show you all the ways you were very awful and borderline racist on national TV. Don’t worry, though. I’m not going to gyp you out of the goodbye messages”  what?  Twilight Zone shit right there.

I can’t even really wrap my brain around what I watched, so I’m curious to hear your take.

The overnight thread will be up in the morning!  Have a good night, and buckle in because this week will be interesting.