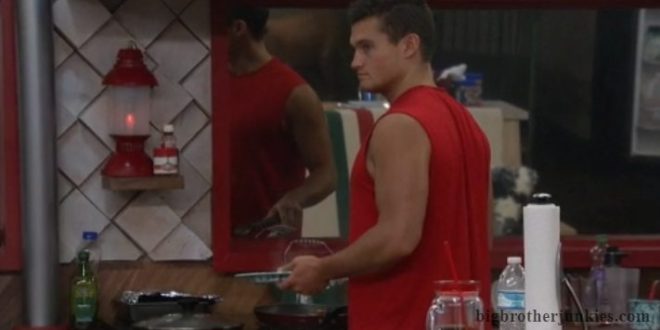 Here we are, with 9 days remaining in the season, we are about 95% sure who will make up the final 3. The final PoV happened tonight and the winner not only secured their way into the final 3, but basically had the power to choose who they sat next to (with the exception of Nicole winning who was already secured plus she only picks one of the final 3).

All last week I broke down the decision Cliff and Nicole had to make on Thursday night – Keep Tommy or Holly. In every scenario, I had it locked that Jackson would win this PoV and sure enough, Jackson won the PoV. That’s because most PoVs are a big mixture of intelligence and physical and Jackson has both. The dude was built for veto comps and next to the other three, he had an even larger advantage.

That is where I’ll mark mistake 1 from the Cliff and Nicole side because they had a chance to get out Jackson during the double eviction, but they stuck with him and Holly.

Mistake 2 was keeping Holly over Tommy when Cliff himself admitted that there is a very good chance he’ll finish in 4th place if they go to the final 4 with Jackson and Holly. He told everyone this! He sat down and told Tommy (and I’m paraphrasing) “If you go to the final 4, I can finish 4th, 3rd, 2nd, or even 1st. If we take Holly, there is a good chance I’ll only finish 4th”. He didn’t listen to himself and sure enough, he should be finishing 4th.

Mistake 3 was Cliff telling Jackson that he was going to take Nicole to the final 2 in the super rare situation that Cliff actually ever had that option. I mean I have a better chance at taking Nicole to the final 2 than Cliff does and I’m 3k miles away and not in the game. That gave Jackson the opening to take Holly to the final 2 because how could he not after that? He’d look like a moron choosing Cliff – someone who won’t take him – over his girlfriend.  His planned pity party of holding Jackson to his word may hold more weight if Jackson believed Cliff was going to betray his ride or die for him as well.

As I mentioned in the other thread, Cliff has been receiving (deservedly so) a lot of flack for this, but he’s also a large reason why Nicole made it as far as she did. On a week to week basis, Cliff was usually in there with working knowledge of who was going home. When Cliff was in trouble, he’d cut deals to save himself and also usually threw Nicole in the safety sphere. He is like the player who carries his team into the playoffs and then disappears during the important games. It’s frustrating to see them disappear, but you also have to appreciate that you wouldn’t be playing in the playoffs without him. Nicole still has a real chance at making the final 2. Sure, it’s not nearly as good as a Jackson, Nicole, Cliff final 3, but she’s still in the game.

How do you feel about this final 3 – assuming Jackson does what everyone is expecting him to do and vote out Cliff?