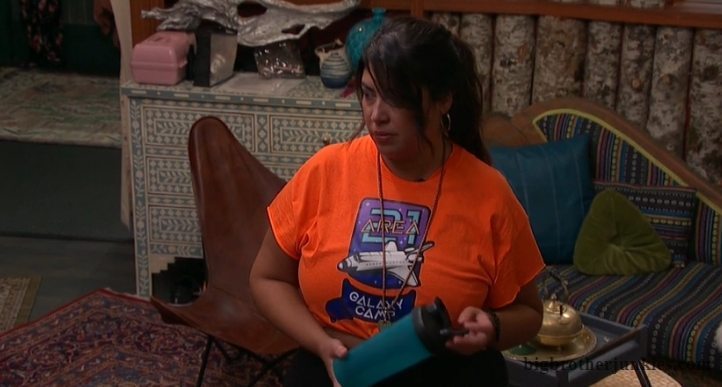 I want to thank the real MVP of the season so far – Sam Smith. He deserves America’s Favorite just for splitting up this house and finally making this season interesting. Think about it, if Sam just went out quietly, Jess still would have won the HoH but the six-shooters would be tight and could easily manipulate Jess into screwing up this HoH. Even with Jess winning the PoV, I can easily see them convincing Jess to get out Nick or something.

I’m trying to wrap my mind around what has happened the last 24 hours or so to summarize, but I’ll try.

As everyone knows by now, Jess won the HoH and has since won the PoV. To those asking, this completely nullifies Christie’s power this week, and I think it’s the last week she can use it (not 100% on the second part). The reason is, Christie’s power simply turned the veto holder into the person naming the replacement. Jess holds the veto, and she was going to name the replacement without the power, so nothing changes now.

With that out of the way, that leads Jess to make a big decision come Monday. She’s either going to leave noms the same which is a risky move, or put up a sure thing pawn like Tommy. She doesn’t want to do the latter because as I pointed out in my previous two posts, Jess still has to think about her longterm game and that increases the target on her back. It’s understandable she’s apprehensive about that, although it would be fun to watch Tommy squirm.

They are all going to walk this strange tight rope because nobody on the ‘other side’ actually wants to declare an alliance so they’re going to play this strange float together to the end game. It’s like a bunch of people floating down a river but then decide to hold hands over rough waters rather than sink or swim together on the same raft. They feel comfortable as free agents, go for it. At this point, I’d like to have a secure 3-4 person alliance and I can’t tell you who I’d consider secure with each other. Jess, Nicole, and Cliff are close but do you ever really feel they’re as tight as say Angela, Kaycee, and Tyler?

Moving forward this week, it appears we’re at a 4-4 deadlock with votes. Kat, Holly, Nicole, and Cliff appear to be voting out Jack while the rest are voting out Jackson. Nick is a huge swing vote who is playing a really crazy middle game that has everyone (including me) convinced he’s currently on Team Jack. Team Jackson will likely try to outthink themselves this week rather than just be confident they have the votes and move on so nothing is even close to a lock at this point.

Needless to say, buckle up because this week is going to be interesting.  Unfortunately, I have to work tomorrow and no morning update by Mel so I’ll try to get something up in the morning and then a new one when I get home. Until then, follow along in the comment section!