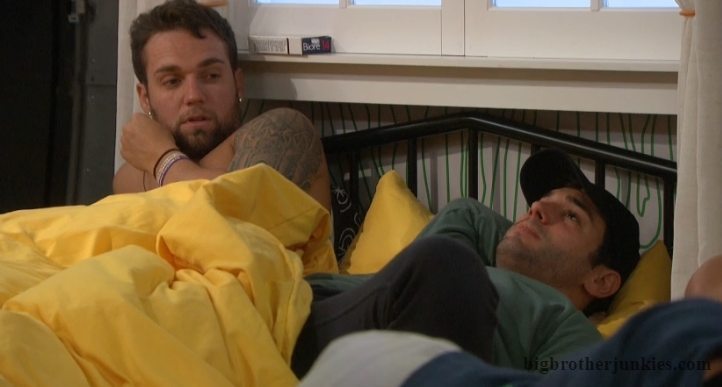 It’s been a pretty slow day in the house as most of it was spent waiting for the veto competition to begin and then just like that it was over, and Kat or Cliff’s season with it.

On Monday, Tommy is all but certain to use the veto to save Christie and the battle for who is staying and who is going will likely take place behind the scenes. It’s extremely unlikely that Cliff and Kat are going to campaign hard against each other.  They’ll both probably campaign for themselves, but not against the other (if that makes sense. You can campaign to stay without trashing your opponent).

However, who goes home will likely be determined by the power group and what is best for their own games. Tommy and Nick are strongly in favor of keeping Cliff because of the gender difference in the house and Cliff is an overall weaker player. Jackson and Holly will likely be strongly in favor of keeping Kat because they’re friends. Jess is likely to keep Kat as well which leaves Nicole, Christie, and Sis as kind of the wildcards this week. As mentioned, one of the people in favor of keeping Cliff doesn’t even have a vote this week so we’re already at 3-1 in favor of Kat. She just needs to secure one more person to stay while Cliff needs all 3 and that’s going to be easier said than done considering two are mad at him for not taking Jack’s deal.

This could end up being a landslide vote against Cliff which will lead to a unanimous vote because that’s just the way this season works. If that’s the case, it will take us back a few weeks to when Cliff was HoH and had an opportunity to feel like a scumbag but make a big move by nominating Christie after telling her he wouldn’t. That’s a move you’d see on Survivor once it’s known someone has the hidden immunity idol. The entire group will lull that person into not using it while voting them out. Cliff doesn’t realize this, but he would have instantly become a BB legend and Christie would look like a fool by leaving the house with her power.

Had he done that, the entire landscape of the season is different. Bella obviously stays which keeps the trio of her, Sam, and Nick very tight. Holly would have won HoH the next week, but with her alliance taking a big hit losing Christie, there is a very strong chance Holly would have gone after Cliff’s side of the house rather than Nick and Sam. They almost certainly would have evicted Cliff at that point which allows him to go home to his family. The next week, had Jessica won, Jack and Jackson still would likely have gone up together but it’s really hard to say who would have gone home. Keep in mind, Sam’s reveal never would have happened which split up the 6shooters. Without that, Jackson likely would have been at the bottom of the pecking order and he very well could have gone home.

So, had Cliff made that move, and Tommy still won this week, it’s just very likely that Kat and Nicole would be on the block with Nicole going home. Once that happened, gr8ful or whatever they would be at that point would be largely in control and the outsiders mostly out of the house.  However, Jackson and Christie would also be out instead of Sam and Jack.

It’s really hard to simulate what would have happened had Cliff nominated Christie that day, but we can easily say that is one move this season that would have completely altered the outcome for better or worse.

Ok, off to bed, updates in comments…