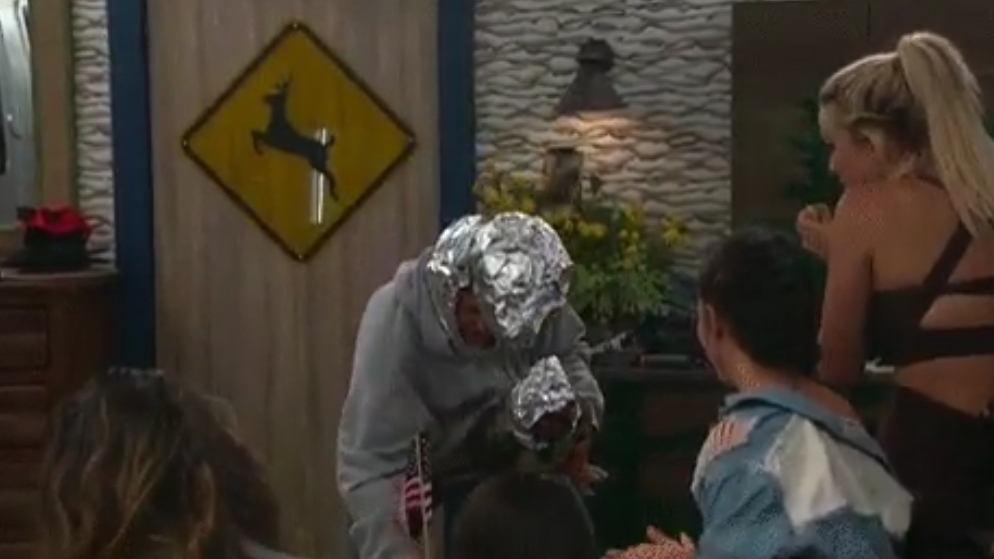 Good morning and I hope everyone is enjoying the weekend! It’s so hot here and has been all week so I haven’t even wanted to do anything outside. There isn’t a lot to recap and sometimes wont’t be on veto days, especially on the days the comps go really long because the feeds are out for much of the day.

We know Jackson won the veto and I have to say, I was very disappointed. The odds weren’t in Cliffs favor going into it but I was still hopeful. Cliff hurt his leg somehow and hopefully it isn’t too bad. Jackson talked about the comp as if it was a war story or like he’d make the tie breaking shot to win a college championship. (If a**hole is a sport, maybe he did)

He didn’t waste any time talking to Christie about the power. He doesn’t just want to come off the block and get Bella out, he wants to feel like he did it. He wants to feel the power. Christie went into full blown panic mode and her usual…tears. She’s the one with the big mouth who told them she had a power and told them she’d use it even before the veto was played. 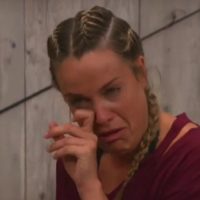 Christie didn’t want to have to give it up to Jackson. She only cares about Jack but Jack is who she’ll be saving if she uses it and Tommy reminded her of that. Aside from wanting to have it to use later, her biggest problem is all the lies she’s told. She’s acted to Sam, Nick, etc. like she wanted Jack out in the past and if she saves him with the power, they’ll know she was lying. (I don’t know how they don’t know it already) Christie cried and told Tommy she didn’t want to have to pick a side yet. Tommy got a subtle dig in about it being too bad that everyone knew she had it. Tommy is obviusly pushing for her to use it to save Jack. (She should use it unless Cliff agrees to get rid of Bella and she trusts it. It only works when her side has the majority of votes anyway so this is the best week to use it imo)

Christie made the rounds talking to everyone and setting things up to cover herself either way. If she uses it, it will be because Bella has to go. She’s making it clear it’s NOT about saving the guys, it’s because Bella is toxic. If she doesn’t use it, it’s because Jackson is bullying her and being too aggressive with her and she doesn’t stand for that. Jackson was getting irritated with her but he didn’t scream at her (she’s saying he did) and she’s the one who told them she’d use the power.  She normally doesn’t have to back up what she says and this time she’ll be expected to do just that. Jack ended up telling her he loved her and not to use it if she wasn’t comfortable with it. She said she just wants to make sure the votes are there for Bella to go.

The 6 talked openly about the 6 in front of Kat and Jess yesterday. They’ve become so arrogant, they don’t even try to hide it anymore. I don’t guess I can blame them since it just goes over Jess and Kats heads. I really don’t get what Jess is thinking but Kat is a different story. We know she has a relationship with HollyBeth outside the house. (One of her friends is best friends with Kat and I think they have work connections too. They talked preshow and planned a strategy) Not only do they have that connection, Kat has been open about why she’s there. Sure, she wouldn’t mind winning but she’s there to gain more of a following by getting as much TV time as she can.

Kat told on Cliff and let Christie know Tommy would probably be the renom if she didn’t use the power. This pushed Christie more towards wanting to use it. She said she needed to talk to Cliff.

Cliff got to have his recreation of the moon walk with an excited audience:

Cliff and Christie had a very lengly talk and Christie may have spoken for 10 minutes while barely taking a breath. I think Cliff said “yeah” or “sure” a few times. Eventually, they both got to speak. Cliff gave his word that neither she or Tommy would be the renom if she didn’t use the power. They talked about wanting to work together and the usual stuff people say. Cliff was trying to get Christie to name who she’d be ok with losing from the 6 if it couldn’t be Jack. (He’s trying to salvage something from this hoh) He was trying to steer it between Holly or Sis but he didn’t push hard enough. He probably felt like he couldn’t. Knowing she’s bossy, he tried the angle of letting her feel in control. He talked about letting her be part of the decision for a renom and I thought it might work for a little while. Cliff made it clear he didn’t trust or even like Bella. He also painted Jackson as untrustworthy. He told Christie about Jackson and Holly trying to work with him. Christie gave up Jackson being the rogue vote so Cliff may have put a small crack in the 6. It’s all he has right now. He needs some kind of deal to be safe long enough for the 6 to turn on each other. They’re supposed to talk again but they ended it with Cliff saying he may be fine with her keeping her power and backdooring Bella for a couple weeks safety. Christie left the conversation thinking Cliff swore on everything, crying and with a deal already in place.

Its disappointing if this happens but the twist completely screwed Cliff. What’s he supposed to do? His entire hoh is a takeover if she uses the power. He can lie, make a deal and backstab her anyway but if he does, no one will ever believe another word he says. I wish he’d do it anyway because if the 6 stays in tact, it will be almost impossible for Cliff to win the game. He’d at least have a move people remembered if he talked her out of using her power, Jackson came down and Cliff put Chritie on the block.

Christie relayed everything back to her entire group after telling Cliff she’d only talk it over with Tommy and Jack. Christie, Tommy and Jack agreed they would keep the deal and keep Cliff safe for a couple of weeks. Jackson… not so much.

Christie and Tommy also brought Kat into a new alliance of 7. Jack agreed since they feel they don’t have Nicole. Jackson didn’t want them to but they did it anyway. Kat should be happy since she was unofficially being used by the 6 before. Now, she’s officially being used. Christie is also telling everyone, and I mean everyone, she doesn’t want to go to the end with the 6. This is what has people like Jess, Kat, Sam  and maybe even Nicole thinking they have a chance.

Kat told Christie she had to leave the room when she was trying to sleep because Jackson and HollyBeth were making too many noises.