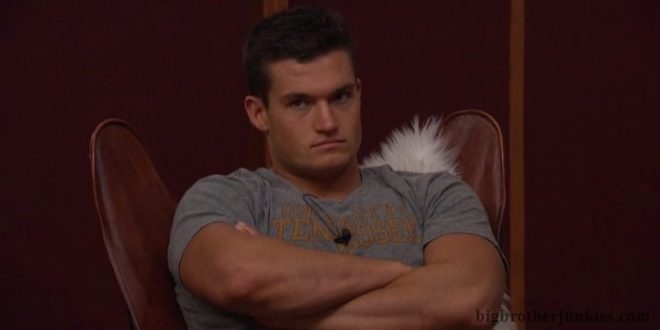 It’s Sunday in the Big Brother house and the moment of truth is finally coming to Cliff and Nicole as Jackson and Holly are breaking the news that Jackson isn’t going to send his girlfriend out the door to save a dude who wouldn’t even save him.

If you’re confused, that is because Jackson won the PoV yesterday and he is the lone vote this week. He has 100% of the remaining power and he alone chooses between Cliff or Holly to fill the last seat in the final 3. It’s a huge power to have but one I pretty much expected him to have once they decided to keep Jackson over Christie during the double.

Oh, before I begin, thank you to everyone who has donated this summer. You are all wonderful!

Holly joins the discussion between Nicole and Jackson already in progress

Jackson is trying to explain that they had a final 4 with all of them but that was kind of tossed out the window last Thursday when Cliff and Nicole seriously considered voting out Holly. They had to re-do deals they already had and they feel screwed over by the new deals.

Jackson explains this was never a master plan but Cliff’s last week of just cutting these new shady deals resulted in the situation where he is breaking his new deal. The Cliff he used to know would stand up and look you in the eyes and stick with it but that all changed when they thought about voting out Holly (I said that they should have taken the shot once they changed their mind).

The problem here is that Jackson and Holly continue to pretend they aren’t working together. Nicole isn’t buying it and she shouldn’t. The two have said this all season long but nobody believes them. Sure, they can pretend they’re two different people, but we all know that’s not the case.

Jackson says he wants to keep this between the three of them and not tell Cliff because of his health. Nicole says she wish she wasn’t told.

Nicole says Cliff deserves the final 3 more than she does because he’s the one who made all the deals. She should have thrown him the HoH

Nicole leaves and gets called to the DR.  Jackson explains how he had to tell Nicole because she and Cliff have been talking about it a lot and it was killing them to know Holly was staying.

Jackson says that Cliff is taking a bullet for Nicole

3:15 pm – Jackson talks to Nicole on the hammock 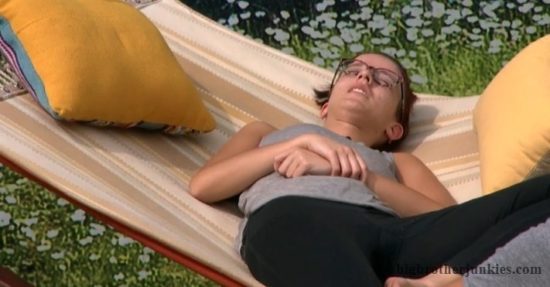 Nicole says she’s stupid and made a stupid move. He asks what is stupid. I wonder if she’s going to tell him ‘keeping you over Christie was stupid’

Jackson says Nicole has a 33% chance at winning the final HoH just like he and Holly….

Nicole turns over to face the wall because she doesn’t want to talk. It’s sad watching Nicole upset. She feels guilty that she’s the reason Cliff is going home.

Cliff joins and they talk about the final HoH. They ask Cliff how it will go and Cliff speculates that the first part will be physical, the second mental, and the third a mix. Is he serious or trying to throw off Jackson? It’s usually endurance, physical/mental, then luck.

Cliff leaves and the conversation resumes. Nicole really doesn’t want to talk about it – STILL – but Jackson needs to feel better about himself so he keeps going. She tells him that his explanation as to why he’s breaking his deal will make them (C/N) look bad. That’s because he’ll go with the angle that Nicole and Cliff broke their original deal.

Nicole is now out alone and talking to herself. She is trying to defend breaking her word to Jackson and Holly. It’s sad because she doesn’t need to defend that. They should have broken their word but they should have stuck to it. That’s the problem.

Nicole tells herself that Jackson should just say ‘look, I’m taking my girl to final 3’ rather than give this big speech to justify his actions. Just do it (I agree with this)

4:00 pm – Nicole goes inside and decides she wants to tell Cliff 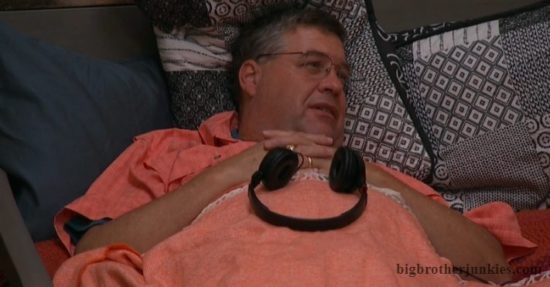 Nicole tells Cliff and he already guessed it

He tells her it’s okay and does his Cliff thing of just being supportive and mature about it all. He accepts that he needed to win competitions to advance. Cliff points out how they didn’t break the word, they just considered it.

4:30 pm – Cliff talks to Jackson about it and Jackson is repeating his whole ‘my word is my bond but it was broke’ blah blah

They go back and forth for awhile. Same stuff that has already been said, Cliff leaves and talks to Nicole privately

Nicole is still upset about not giving Cliff the HoH but what was she supposed to do? Dude fell off before commercial break ended.

5:00 pm – Outside, Cliff is talking to Holly and Jackson

Jackson is explaining how Holly wouldn’t have had to throw that HOH if the deals weren’t broken and she likely would have won. Cliff responds ‘we don’t know that’ in this same tone

He literally made the same face as Thor “we don’t know that” then Holly gets super defensive and repeats how she probably would have won. That one touched a nerve. Also, I think it’s awesome that I used Thor meme twice in the same post.

Ugh this point is going back and forth. This house is too friendly.