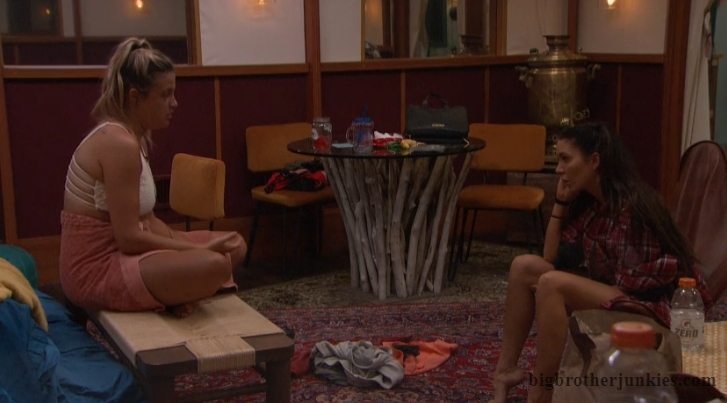 I haven’t been around much today so I am not sure if there was anything specific that happened on the feeds, but it appeared to generally be slow. Sundays usually are, so I am not complaining. It’s typically the eye of the storm between Saturday and Monday and the house is usually in limbo until the veto is used (or not used). Which is kind of weird considering how often it would have been more beneficial to campaign yourself off the block rather than wait until Wednesday night when you’re still on it.

However, when you have Christie on the block, there is no guarantee that won’t happen. Love her or hate her, she plays hard and is going to try to stay.

Alright, I just wanted to get this post up to let you guys know that I’m home. I’ll be watching the CBS episode then updating this thread about the feeds.

Also, thank you so much to the people who have donated this season. I love you all!  Here is the donate link

5:00 pm – Christie has Holly in the HoH room working her. I’m going to pause this and come back to it when the show is over

Back – CBS episode was okay. A lot of funny parts to it. I like the episodes like that when they include all the random stuff in the house like Jackon’s sayings and Analyse not understanding how time works

Anyway, Christie has been campaigning to Holly. Not sure it will do much but she’s trying

Tommy comes in and makes sure he’s still cool with Holly and Jackson. Dude is slick

6:40 pm – Houseguests mixed between outside and inside

They are laughing because Cliff calls vlogs ‘v-logs’ and I suddenly feel stupid because I actually pronounce it that way as well. I know they’re just pronounced vlogs just like blogs but I can’t stop calling it v-log.

7:15 pm – They are looking at a bird in the back yard and they see a bird. Analyse says she thinks it’s a robot with a camera in it. Part of me doesn’t know if she’s kidding or serious 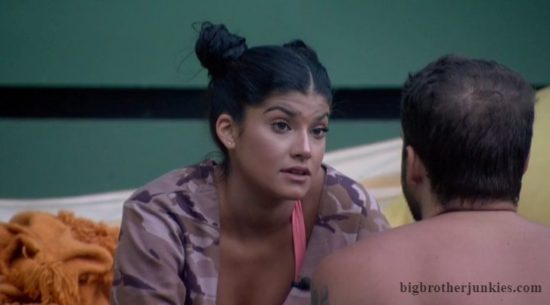 She moves to a different part of the yard and of course, Nick follows

Analyse thinks she can form another 6 (oh boy) to get Jess on the block and her out this week lol. Why are these people obsessed with 6 person alliances?

She is going to push safety in numbers to Jackson because they’re going to need Christie for a mental HoH comp next week. lol

Nick says the universe is making this all happen and Christie is going to stay.  Delusion.

Oh, and I can’t believe none of these people put the Tommy and Christie connection together after that talk. Come on. Nobody even just threw the idea out? That is the perfect example of how bad these people are. If bb19 didn’t happen, this group may be the worst players I’ve ever seen.

7:45 pm – Before dinner, Sis pulls Christie into the RV room to tell her plan but Nicole comes in and talks break up. Now it’s family dinner time

8:30 pm – Sis and Tommy make their way upstairs to campaign to Holly and Jackson 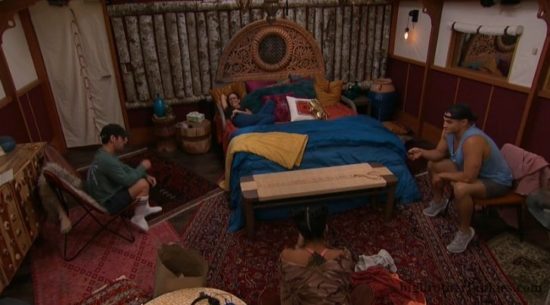 Tommy and Sis literally and seriously and totally see both sides

Jackson and Holly at least pretend to humor them. We’ll see how they really feel when the two are gone

The two leave and Jackson says they’ve been backed into a corner. He thinks they’re worried because all they had was 6-shooters. They had no other connections. Didn’t even consider having outside relations with people. Tommy is a bigger threat than them. He says he doesn’t think he can beat Christie or Tommy and doesn’t want to risk it

Jackson says if he changes these noms, it ruins any goodwill they’ve made with the rest of the house. They (Jackson) took their shot and have to stand by it. Jackson thinks that Nick will take him far and Holly says ‘does he though?’

Jackson says he doesn’t want to take the coward way out but he battled Christie this week and won and wants to take his shot. He’s right. 6-shooters are dead and any chance of rebuilding it is toast.

Overnight thread is up!