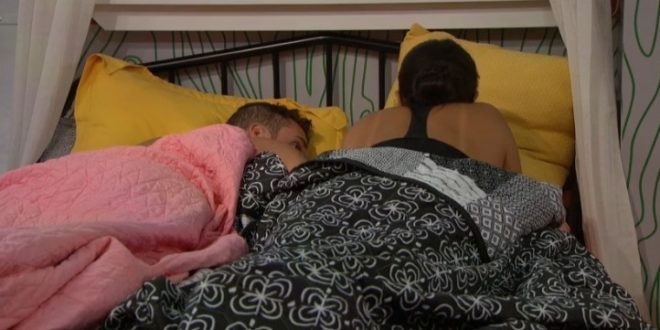 I’m home from work a bit early so I can actually get a feed thread going today.

Before I begin, I’ve been monitoring the feedback about the comments.  Tonight, I am going to see if I can hack into the code and create it so feed updaters posts are highlighted (NK for example and anyone else you suggest who does often updates in the comment section. Please contact me here). I’ll then follow this next poll to see how you now feel after roughly a day of reverse order comments.

Tomorrow could be an epic day on the feeds because of what happened last night. My own CliffNotes version – Cliff told Christie that he’ll nominate whoever she wants in exchange for not using the DPoV. She told him Bella and he agreed. Christie is pumped. Most fans think he was lying. He swore on his family, but there is a twist to that….

Cliff, please consider all #bb21 family-based swears null and void. Do whatever. Say whatever. Lie. Swear on us. Backstab in our honor. We don’t care. We good. @dhogg10

So if he does go back on his word, let it be known that he has been given full permission by his family to lie and say whatever he can to win. Take that how you will, but I personally take it as pretty sweet. I know people are superstitious, but isn’t there a subclause to the rule where you’re allowed to swear on someone and lie so long as the person being sworn on agrees to it? Also, this rule is further emphasized when you’re playing a game that can potentially win life-changing money.

I’m sure that rule is in there in that unwritten rule handbook. Check the fine print.

Oh, and sign up for the feeds and thank you to everyone who has donated!