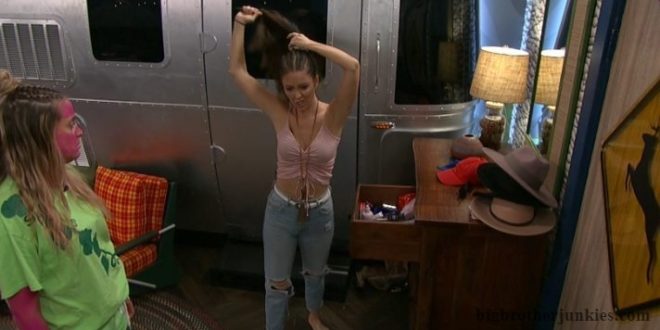 Will we have a second straight week where two targets were nominated but neither evicted? Last week we obviously had Jack and Jackson with Bella getting evicted courtesy of a bad move by Cliff combined with strong convincing by Christie. However, this week it could be a tad different which could get fun. Maybe.

Right now, Nick and Sam are on the block and Nick is coming off tomorrow with the veto. Sam has been playing his hardest the last 24 hours or so to get someone evictable up next to him which is a pretty good strategy. Rather than shoot for the impossible like a Christie or Jack, or accepting a pawn like Kat, he has been pushing for someone who could potentially get evicted over him – Nicole.

Now, Sam isn’t exactly pushing to get Nicole out rather than trying to sacrifice her for his game. I know it’s a weird distinction, but it’s the difference between people who love Nicole tearing him apart or understanding this is just a game move. I hate that I need to even explain that, but I’ve noticed former houseguests are still getting hate mail/tweets from the fans of their rivals of seasons past. Shit, someone recently sent a letter to Bayleigh’s dad or her dad’s work trashing Swaggy. Weird. Too far. Way too far.

In other news, we saw hints of Jackson being done with Christie on the CBS episode tonight, but that wasn’t just a hastily edited piece to create drama. He’s still on that path and that showdown is going to happen sooner rather than later. In fact, Jackson is seriously considering keeping Sam so he has Nick and Sam to go after Christie. He even went as far as campaigning to Jack about it. Bad move on his part, but I don’t think anyone really understands how in love with Christie that Jack is. Once she gets full wind of it, drama could finally pick up.

I know this season has been dull as hell, but I’m crossing my fingers that things will pick up sooner than they did than BB19.

Updates in the comment section. I’ll be traveling a bit tomorrow but I’ll have a thread up shortly before or after the veto ceremony.