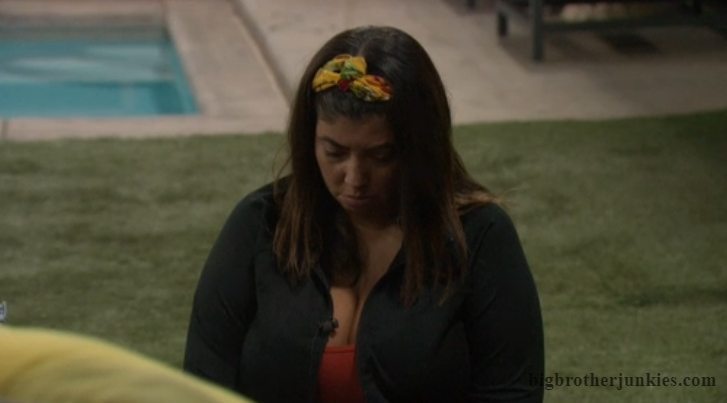 First, it always throws me off when Jess randomly shouts out her husband (or bf, whatever) because I’ll be zoning out and hear “Steve, if you’re watching, I love you”.

Alright, time for the recap before bed

It was a relatively quiet day in the house, but the mice started to scramble as the sun went down. Hmmm, sounds too much like a children’s book. Let me start over.

It was a quiet day in the house until Sis got a zap of energy in that empty shell of a skull and formulated a thought. Unfortunately, it was not only the same thought that has been said by Tommy about 100x this season, but billions of times in history (and it’s usually a bad one) which is ‘let’s get the band back together’.

Yes, Analyse’s big breakthrough today was to pull Jackson aside and try to pitch getting the 6-shooters back together except swapping Jack with Nick. Let’s just ignore that they formed the same alliance last week except Holly and Jackson were swapped out with Nicole and Cliff. Let’s ignore that Jackson despises Christie. Let’s ignore that Tommy has been desperately trying to keep that alliance together for weeks. Yup, let’s pitch that 6-shooters once again.

I’m pretty sure if Tommy or Analyse were in the final 3, they’d still try to form a 6 person alliance. There are 8 people in the house come Thursday night. Alliances with 75% of the house don’t really work very well unless they’re down to like 4 people and 3 of them have been super loyal since day one (level 6). Stop trying to make 6 shooters happen. It’s done.

Needless to say, Jackson listened to the idea and pretended to like it, but shot it down the second they left the room. They’ll probably entertain the idea more tonight but noms are super unlikely to change tomorrow.

Updates in comments. Have a good night!