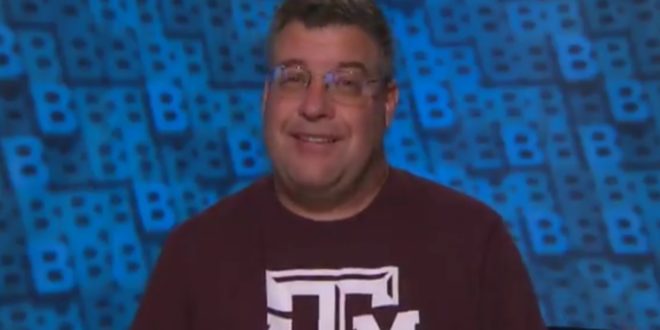 Good Labor Day morning. I hope you all had an amazing weekend and if you’re off work today, enjoying yourself. Except for the Jolly Rancher shomance drama, we’re just sitting around waiting for Jess to be evicted and see who comes out on top in the double eviction on Thursday. The veto ceremony won’t even be pivotal today because we already know Tommy will take Christie off the block. He was always going to take her off, it was only a matter of which reason he’d use.

Tommy telling Jackson that he had Beth and saying Tommy only had Christie was just as good as any other reason he could’ve came up with. For a time, I thought they were all lying to each other but for now, Jackson believes Tommy is with him. He and Beth are a little concerned but not as much as they should be. Jackson thinks they should throw the next 2 hoh’s so they don’t have “to show their cards.” Beth thinks they should throw the next one and decide from there. Yep, Jolly is still a couple.

Is it possible the DE won’t bring any excitement? If they stick to this plan, we’ll head into Thursday knowing Christie and Tommy have good odds to win. If Beth throws it, there will only be 4 people really competing for it and the physical part should give Tommy the advantage. Tommy and Christie will go after Jolly and I think, Cliff and Nicole will go after Christie and Tommy. Will Beth really throw the comp this late in the game? I have to think once they find out it’s a double, she and Jackson will change their minds about this but you never know.

Yesterday was the typical Sunday, Funday outside while they wait for the veto ceremony. Sometimes, there’s a lot of game being played leading up to it but Jess told Nicole she wasn’t going to campaign and doesn’t see the need for it so it was a very slow day. Here’s the recap:

That’s pretty much it for yesterday. If you want excitement, I’d start hoping people get paranoid but that would only result in Cliff leaving over Jess and that’s not very exciting either. Cliff isn’t some amazing player but he has done well for himself, especially as the token 50 plus player. He’s done a lot more than Jess. I’d hoped Jess was the next to leave before the wall comp was finished and that hasn’t changed for me. Nice enough lady but awful BB player.

I keep reading peoples opinions about production meddling regarding Christie and Tommy. (Not so much here but other places) I dont see it, sorry. I just don’t see the conspiracy this time around. It’s one thing to pass off a bad decision as a twist but do they really want Christie and Tommy in the F2? I don’t think so because it only opens the door wider for people to say “well, of course they got to the F2. They knew each other!” It’s a better result for the show if they’re found out at some point in the game. Sure, they wanted Christie to stick around and have probably led people in that direction in the DR because she’s easy to edit for entertaining episodes. I also wouldn’t be surprised if some of Nicole’s recent “concern” over what is up with Christie and Tommy lately, is some leading questions in the DR. I’m not saying that’s what’s happening, only that it wouldn’t surprise me. Sorry there wasn’t more to offer today.