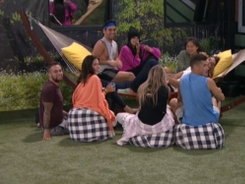 This is the new (and hopefully very short lived) section I’m calling BB Sexcapades. Feel free to scroll down to the picture of Nicole & Kemi and start reading from there if you want to avoid it.:

How did I end up doing updates for Love Island when it hasn’t started yet? That’s what this feels like and it isn’t pleasant so if there’s a blog for that show, don’t call me! I’m just going to get through this as quickly as I can. Normally, I would simply say so and so had sex and move on. This will be more detailed because it bacame a big part of the day and also could involve peoples games down the road.

On Sunday morning, we found out Sis (Analyse) and Jack did the deed. Actually, if you watched the feeds the night before, you would’ve had a pretty good idea in advanced.  Jacks birthday gift became a shomance people are referring to as Analjack. (It’s that or Ajax imo)

Saturday night, Nick must have made a comment about the bedroom door being locked up in the hoh or something. (Not sure what was said) Sunday morning, Jackson couldn’t wait to tell Jack that Nick was making a big deal out of it. They agreed Nick is just jealous because he “got stuck with Bella.” (Their words, not mine)

Nick HAS been a little jealous because he really liked Sis. Nick is woman crazy, period. He hung out mostly with Bella but had been flirting with Sis after Bella told him they couldn’t hook up and be physical. (Bella still has her stuff at her exes or something or other) Bella soon got jealous and told Nick that he belonged to her and couldn’t flirt anymore. I guess it paid off for Nick since Sis wasn’t interested in him anyway AND Nick did the deed with Bella around the same time Saturday night that Analjack was doing theirs. Bella and Nick were downstairs and with a rom full of other people when it happened between them. (More details in a bit…unfortunately)

I don’t know what Nick said about Jack & Sis and the locked door and Jackson may have exaggerated it when he told Jack about it. The Jackoffs said they needed to confront Nick but would wait a couple of days. For now, they were content to beat their chests and pity Nick for having to settle for Bella. I don’t think Jack told Jackson about hooking up with Sis at this point but I’m not sure. 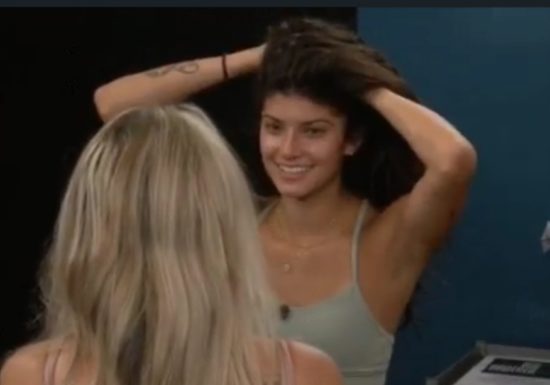 Meanwhile, Sis was somewhere else confiding in Holly and Christie about how she made a move on Jack. She said it was the biggest d**k she’s ever….you get the idea. She had more comments and they’re only relevant because she became paranoid about the feeds as time went on. Sis said she thought the way people knew about hg’s hooking up last year was because they were talking about it on feeds afterwards. She didn’t realize the cameras might be on. Christie explained how people watch things and then write about it. (Christie really is psychic since I’m writing this) Christie had some of her facts wrong as to when they’re on and where but it was enough info to worry Sis. She was very concerned about the shower area and cameras. She went on and on saying things like “I’m very conservative with my body, I won’t just  f**k anyone.”  (If Sis thought people would only know it happened if it was talked about, wouldn’t she have blown it by talking about it as soon as she got up? This made no sense.)

I saw this on Twitter and thought it was funny.

Look, these people are adults and they can do whatever and whoever they like. If they do it on live feeds, it opens the door to be discussed. It’s not a door I usually walk through but if they do it on the feeds AND spend most of the day talking about it AND getting upset with other people for talking about her in the house, I have to go through the door. She also talks trash about everyone but got upset when Nick talked about her. (I’m getting ahead of myself here tho)

Jack didn’t wait for a day or two to go by and he talked to Nick anyway. He didn’t really say too much  but Nick asked him what happened in that gross bro kind of way. Jack said he just showered and went to bed. (For a second, I thought ‘ok, Jackhole may have one redeeming quality.’ Don’t get excited, the thought doesn’t last long) Nick, not wanting to let it go, told Jack that he’d been with Bella. He had details about laying sideways since there were people in the room and that being the best option. (enough said) Nick also said something about “on day 18, he and Jack both got to “release.” (Soooooo romantic, I bet lots of ladies will be lining up for Nick when this is over) This was Jack’s signal to laugh and finally come clean. He told Nick about putting up two towels over the shower door. They had a nice little “atta boy” minute and all was well. (See, Jackson likes drama and he’d like to keep this going but Jack is content as long as he feels Nick is jealous of him. Jack doesn’t have to be mad as long as Jack gets to be envied) Also, why was Sis so shocked about the feeds if they put towels over the shower doors and why suffocate yourself fully under the blankets in the bedroom? It doesn’t sound like someone who isn’t aware of the cameras.

Jack ended up telling Sis that Nick was inquiring about what was going on the night before. This sent Sis into a broken record kind of day. She told anyone and everyone that whatever she did was her business and people should worry about their own sex lives and so on and so on. She made sure Nick was around when this was said (some of the time) but she acted like she was directing it at Jess during those melt downs. If there were people who missed the blankets moving OR her own telling of it the next morning OR Jack admitting it to Nick, they had all day to find out thanks to Sis and her inability to shut up about it.

Whew! Glad that’s over. Sis telling on herself ALL day, Nick’s jealousy, Nick and Bella getting in more hot water with their alliance lately and my being able to mention Analjack are the reasons I thought it was relevant and deserved more than the usual so and so had sex. Otherwise, I could’ve just said: Bella likes Nick, Nick likes Sis, Sis likes Jack, Jack likes Christie and Christie likes women. Done. 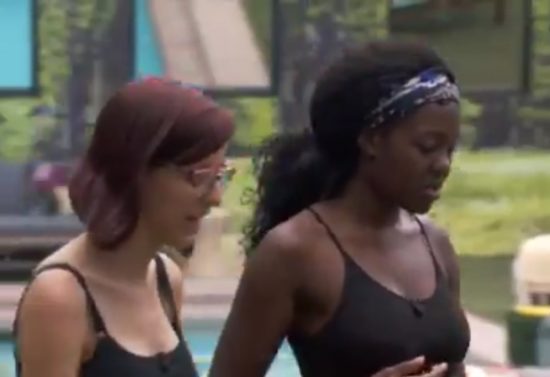 Back to some normal stuff: Everyone got to enjoy the yard yesterday. Kemi is still trying to find a way to stay this week. Nicole has been busy too. She seems determined to keep both Kemi and Jess and is trying to get Bella backdoored. I don’t see it happening but she did talk to Christie and told her Jess was taking the fall for Bella. The problem is that H8ful already has their eyes on Bella. (Nick too) They also aren’t going to backdoor someone in their alliance when they won’t leave the house. Nicole doesn’t know Bella is in an 8 person alliance with them so she’s still trying. I love the effort and she’s doing a good job of sticking her neck out without becoming a target.

Kemi talked to Sam about using the veto. She laid out how Jess would go after Nick and Bella which were his two closest allies and she wouldn’t. (True) She pointed out where he may fall on the pecking order and said everyone can’t work with Jack. She also reminded him that Jess said she’d never put up a woman. Kemi said she didn’t care if someone had ovaries or a penis, if the were bad for her game, she’d put them up. Sam agreed Kemi would be better for his game and said he wanted her to stay. He also said he wouldn’t use the veto because Jack doesn’t want it to be used. He told her he was concerned Nick could go up as the replacement. (This is also true)

Jack confided in Christie that he’d made a mistake with Sis.  He assured her she would always be his #1 in the game and he would never betray her. He tries to get her to sleep upstairs so he can try and back things off with Sis. Christie suggested he sleep alone. Jack said maybe he would ask Tommy to sleep up in the hoh.  Christie tell Jack she was fine with whatever he did for his game and assured him she wasn’t worried about his situation with Sis.

Christie talked to Sam about the possibility of someone needing to get rid of Jack. She said maybe he was a real life villain and brought up his HOH letter and none of his relatives signing a release. She also noted how his only picture was of his dog. (If she’s serious about going after Jack, maybe she shouldn’t evict people would do it. Just a thought)

H8ful had another get together in the yard.  The vote rhey keep taking still has them wanting Kemi to leave. (They know Jess will put up Nick and Bella if she is hoh) Jack mentioned being worried about David although they all agreed they liked him more than they thought they would. Jack believes if David is the person to come back in, he’ll end up with some kind of safety for a week. He thinks if someone else comes back in, they won’t have it. He said the show really wants him back in. 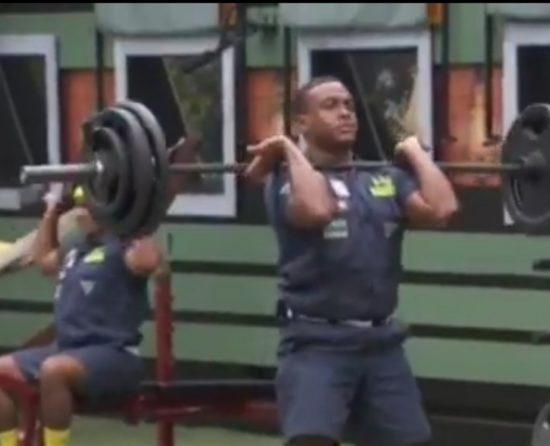 Holly assured Kat nothing would happen between Jackson and herself. Kat told her she didn’t care and to go for it. Kat said Holly was still her F2.  I also heard Jackson and Holly talking about how Jackson followed Holly on Instagram. (There’s a story going around about Jackson dated one of Holly’s friends but I don’t have much info on it yet) 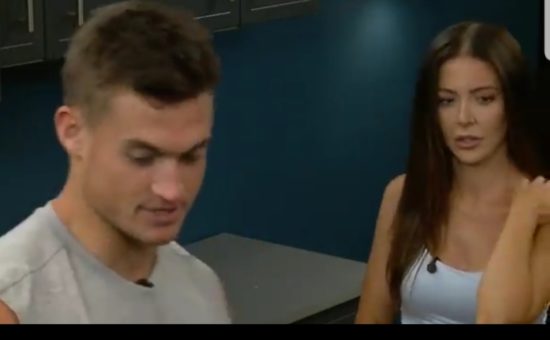 Sometime in the middle of the night, Sis made her way upstairs.

I know I’m leaving things out from last night  but some of this was already written and full disclosure: I overslept! The things I’m adding are in a rush so If I’ve missed anything that’s important, I’ll try to include it in the next one.