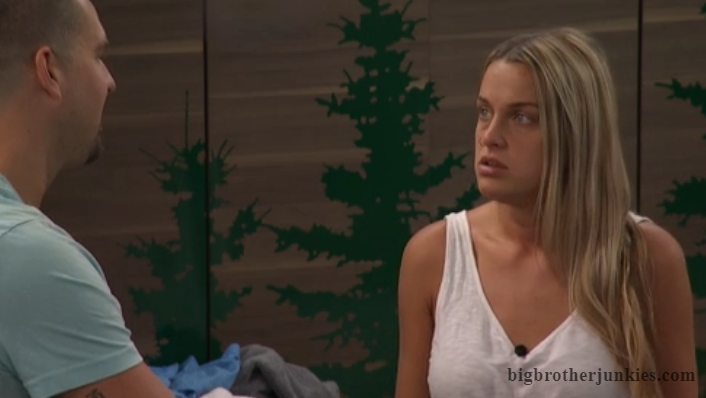 This isn’t a live update thread because feeds go up and down all day and it’s frustrating to blog. That is why I never do Thursday afternoons. However, learning how obnoxious it is to try to follow along with threads that have 50+ comments on it, I’ve been creating new threads periodically just to space out the comments a bit. That is why I have been doing an overnight thread and letting the comments (NK) update even when I’m zonked out in bed.

The week is finally over and we get to see who wins a new HoH tonight during an endurance competition! It is most likely the wall comp or some type of hanging comp as there are too many people to do the slip and slide challenge or similar endurance comps. That means we’ll likely see Christie, Tommy, Nick, Nicole, and maybe Analyse as the next HoH moving forward. Kat can also win but I don’t think she’s going to try very hard because I don’t think she wants the power right now. That comp not only takes the right body size, but determination. Sam, Jackson, and Jack have the determination, but not the body. Kat, Holly, and Analyse have the body but not the determination. I don’t think Nicole has the fire, either, but I’m just holding out hope with that one.

Another thing to note moving forward is about Jackson. First, it’s clear that most of the house is getting sick of him. Kat actually said that she feels unsafe in the house with him before the feeds were cut because production is protecting him for some reason. Probably due to how much crap they’re already receiving for not doing anything about him breaking the slop rules this week. He’s been sneaking food all week but will likely not suffer any penalty. At this point, the havenot aspect of the game is just a novelty, anyway. It’s like when Ian volunteered to be a havenot the first opportunity because he wanted to experience it (that is one of the first memories I have of someone volunteering and being happy to be HN).

Either way, Jackson isn’t likely to make it very far in the game at this point. He very well likely would have gone home this week if he didn’t win the veto.

Enough rambling – Tonight’s HoH competition will be on the live feeds, so be sure to sign up to them here. There is a free trial, so it’s worth it!