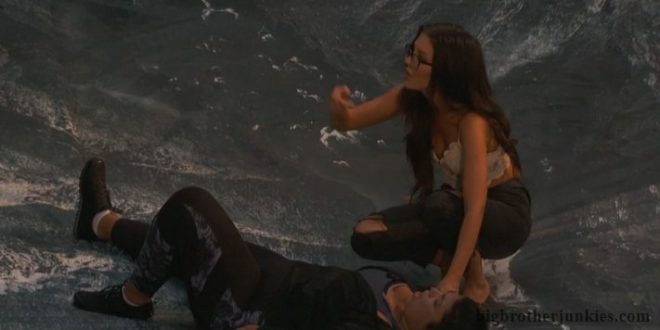 What a weird twist of the season. We go from having the house spread the wealth when it came to HoH to suddenly Jackson/Holly turning into a power couple and winning everything. They really need to keep winning because I have a hard time believing they won’t see the block the second one of them loses.

Now that Nick is gone, it’s hard to tell what is going on this week. I suspect it will once again be Christie on the block with a pawn. Tommy will likely be the replacement if it comes to that. Christie should have a chance to survive the block for the fourth consecutive week, and I’m hoping she does it because that’s a pretty good streak.

Nicole tried real hard to win this HoH competition, and she really should have. The wall comp is built for someone of her body type, but she didn’t even finish as a runner up. That goes to Tommy who was another favorite to win but failed. Jackson beat all odds by beating the wall as a big dude with a lot of weight to hold.  Really weird season.

Speaking of weird season, Julie announced a double eviction next week which throws a wrench in the rest of the season. Typically they have a recorded eviction on the Tuesday of the last full week (aired on Wednesday) then another eviction on Thursday, but I don’t think that will happen this year. After next week, the house will be down to 5 people so any major twist after that point is rare. I think it was this week or no week to have a reset meaning the rough schedule is just going to be:

And that’s it. There should only be 3 more nights of evictions before the finale which is sad to me.

Time to have a poll: