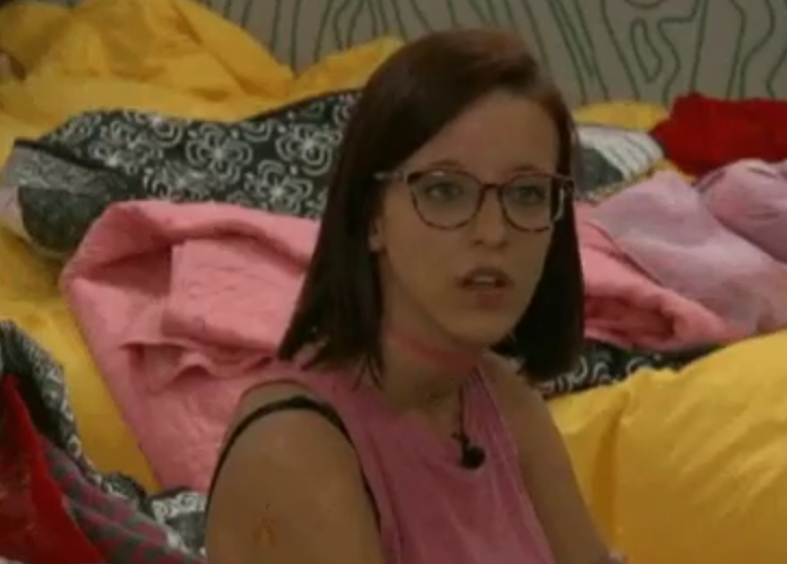 It didn’t take long for things to heat up after the live show last night. I’m curious how cocky Bella would’ve been when she mouthed off to Kemi if Nick hadn’t just won the hoh. Kemi wasn’t buying what Bella was selling and Bella did more hair flipping in 5 minutes than I’ve seen all season. Bella is already acting like she’s queen bee and this hoh just started. (It could be entertaining to see how much more Bella spills when she knows she safe, if there’s anything left) Tommy told Bella that Kemi was the villian and America doesn’t like the villian. (Sit down and shut up Tommy so I can keep liking you!) Christie and the rest of H8ful were already kissing Nick’s ass.  There had to be some paranoia since the 6 Shooters (H8ful minus Nick and Bella) have talked all week about how soon they can go after Nick and Bella.

Sis talked the most smack about Nick as recent as yesterday and ALL day long. She was probably really focused on the game and worried after Nick won, right? Nope, she got mad at Jack because she said he goes to Christie first after anything eventful happens in the house. He must’ve done that after Nick’s win and Sis let him know she didn’t like it. Jack didn’t really care and told her he couldn’t have her riding his hip or something like that. He’s pretending like he’s doing it for the both of them and so people will target Christie and not Sis. I’ll give it to Christie though, she has them both confiding in her. Christe loves every minute of filling Sis in on how much Jack likes her (meaning Christie) but acts like she’s looking out for Sis. I’m sick of Christie already but I have to admit, she’s playing one of the best games in the house.

Holly tried to sympathize with Kemi by acting like they’re in the same boat since shes worried about a Nick hoh. (Get out of Kemis f**king boat Holly! Her boat sank when you voted her out and there’s no room for you in it!) Ok, I may not be fully ove Kemi being evicted yet.

Kat went another direction after the live show. She started telling people about Kemi trying to start an alliance with her when she was campaigning to stay. I’m not sure Kat’s really keeping up with current events like Kemi being out. She’s more focused on her new shomance with Brett. She calls it Brat. (I know these things happen fast but maybe they should meet first)

I worried for Nicole as soon as Jackoff #2 cast his vote to evict Jess. Along with blaming her for the vote, people wasted no time saying Nicole had to know about Kemis speech ahead of time. (She did)  So what? The speech wasn’t even important. I really like Kemi but it wasn’t that big of a deal. The house already distrusts Bella and most of the house knew Kemi didn’t trust her anymore either because of her campaigning. Since Nick won the hoh, the only thing Kemi accomplished was pushing Nick and Bella back towards the group of 8. Ya, I know Kemi didn’t know he was going to win but it wasn’t going to help her anyway.  Nicole looked so sad:

I was really hoping for a Sam win even though it probably wouldn’t have been good for his game. He was the best hope for something exciting to happen. If there wasn’t a camp comeback, I think Nick would go after Jack. He still could but I don’t see it happening. Some duo out of Cliff, Jess and Nicole will be otb.  Jackson is already blaming his Jess vote on Nicole.

My takeaway from Thursday’s live show:

I noticed Cliff got Orwell back.

I didn’t think Jess’ speech was ever going to end.

Soooooo over the shout outs. Holly spent more time doing hers as she did voting.

Now we know camp comeback people get to be downstairs during the live show. They also got to watch and listen to the hoh comp. Why are they stuck upstairs if they get to do both?

Did Bella tell Julie she loved her when she voted? Weird

Who else wants to know what was said in the middle of voting during the commercial break? No way Nick and Bella sit quietly after that speech.

Why did Julie put Kemi on the spot in front of the hgs with a stupid question right after she was voted out? She looked pretty tho: 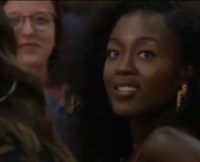 Ok, back to the recap:

Nicole finally started figuring out who is working together. She named the 8 and knows she’s in trouble. It’s so easy to get caught up and focus on the wrong things in the house. It’s that ‘can’t see the forest for the trees’ thing. Nicole knows Sis, Holly and maybe others talked about Nick this week.

Nicole shouldn’t have had to piece together the 8 since Bella had already told Kemi. (Communication is key people)  Kemi told Nicole that she filled Ovi in on the 8. Ovi asked Kemi if Jack knew about it and Kemi said “he created it!” (This is why I have no faith in Ovi and don’t want him to be the one to come back. He’s been shown several times how the jackoffs betrayed him but he still has doubt)

Jackson told Jack he was the rogue vote against Jess. They had a big laugh over it and think they’re masterminds:

Nicole had a plan for Kemi to spill all the things Nick and Bella said about Sis and Holly.  Using someone who’s already been evicted is a good plan but this one was dumb. (What the hell was Nicole thinking? It should be the opposite. If she thinks she’s in trouble, she should tell Nick all the things Sis and Holly said about him. He’s the hoh.) Kemi FINALLY told Nicole about Christie listening to Cliff spill his game info and how they know about Nicole’s alliance with Cliff and Ovi. Nicole realized this is the reason people have been acting weird. (This is an example of why I think David should be the one to come back over Kemi. Love her but not the best player)

Kemi debated but decided to go to the hoh room for Nick’s room reveal. She gave him a hug and congratulated him so she kept it mature. Later, Cliff told her he thought she was classy. Nick got a letter from his dad:

After the argument between Bella and Kemi, Bella talked about not forgiving her, she didn’t do anything wrong, blah, blah, blah. Bella will be the victim this week and everyone will agree with her since she’s basically co-hoh. She was pretty full of herself last night: 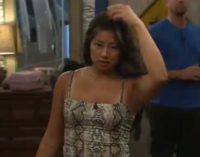 Kat and Jess got caught up on the important game issues like Kats shomance with Brett, Kat saying David told her he is falling for her (I haven’t found anyone who witnessed this yet) and how they’ll always be loyal to each other. Jess (not surprisingly) has made a complete 180 and now understands why Bella had to out the womens alliance to Jack. Jess thinks it’s more Kemis fault than Bellas. (Good try but this won’t save Jess)

They discussed their shout outs and Holly said she did one for “her friends baby.” They think these are soooo important. I wish they knew we wanted to throw things at the screen while it’s happening.

Jack suggested to the 6 Shooters they not even tell Nick who the target will be. I’m curious to see how this will work. This was his thought process when he wasn’t sucking up to Nick at least.

Kemi got her camp outfit and said they gave her 5. David said the guys only have 1. Apparently, the swimsuit is “really ugly.” Kemi said “this looks like something Holly probably wears to work.” She tripped and fell right after the reveal: 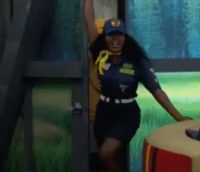 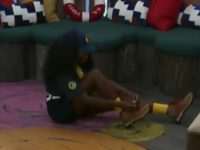 Nicole made good progress convincing people she didn’t cast the vote against Jess. Jackson had to switch gears and started blaming Cliff. Half the house already thinks it could’ve been Jackson. He talked about it more than anyone else which is such a give-away. She also had a good talk with Holly. They talked about Bellas lies, how they both told Bella personal things and trying to work together in the game. Holly spilled she and Kat are close and if Nicole was paying attention, she would’ve picked up on how much Holly seemed to know about people she claims she isn’t working with. 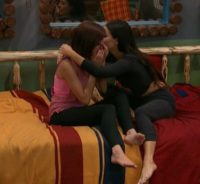 Jackson got an announcement from production about conserving water since he stands in the shower a lot talking game. This time, he was complaining to Bella about Kemi and saying he wanted “to put Kemi on blast.”  He’s such an a**hole. 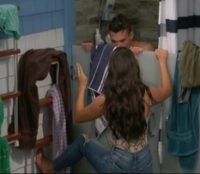 Nick assured Nicole he isn’t putting her otb. He said he believes someone was trying to blame the rogue vote on her. He said he’ll use Kat for a replacement if he needs one. It looks like Cliff and Jess will be going up, at least as of last night. Sam really wants to play in the veto but Nick told him he isn’t picking him to play. (Nick may be saving Sam from himself)