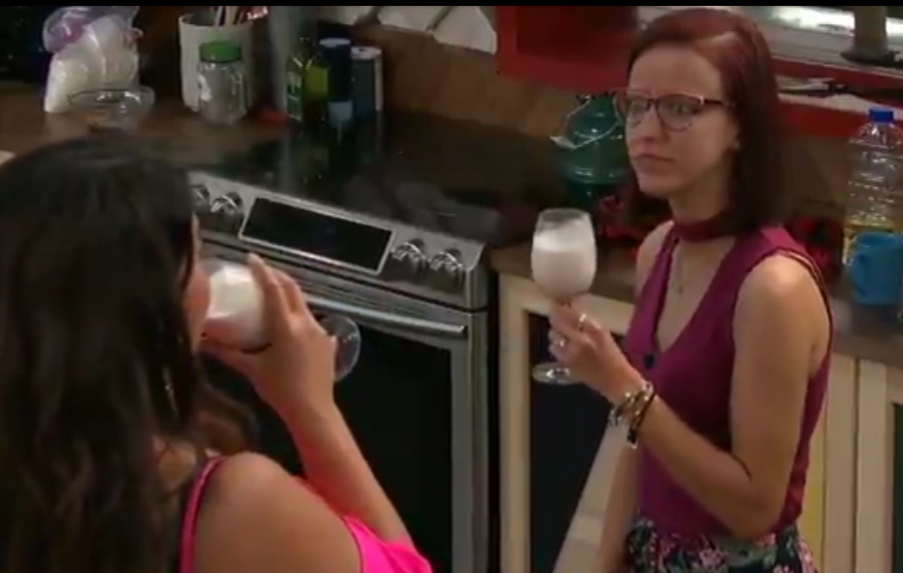 Good morning everyone! There wasn’t much excitement on the episode last night but there was in the house yesterday. Even with packing for the move, I kept trying to listen since a vote flip was possible all the way up to the feeds cutting off. This is day #2 of packing so I’m only able to touch on a few things today. This isn’t really even a recap since so much won’t be covered. You can check out Steves posts from yesterday for more of the details.

Jack and Tommy got lost in the excitement of a potential vote flip and began pushing for it.  That’s the last thing we were watching when the feeds went down  I say they got lost in it because there was no reason they should want to keep Sam.  Sure, Nick has always felt close to Christie and has worked hard to regain the trust of the 6 this past week.  At the same time, Nick is very wishy washing and before he went on the block, he felt very betrayed by her. Sam spent his last couple of days trying to destroy Christie’s game so I don’t think anyone can say there was a guarantee Nick and Sam would have been working with them if Sam stayed.

Honestly, last night should’ve been a tough decision for everyone on both sides of the house. (I suppose it’s 3 sides now)  From what I could gather last night and this morning, Sam staying isn’t what broke up the 6 shooters. Jack’s inability to doubt Tommy or Christie and Jackson’s blind loyalty to Jack is what did them in

Jack told Christie everything yesterday and Jack, Tommy, Christie and Sis were gearing up to keep Sam and go against Jackson and Beth.  The outsiders were definitely wavering when they were approached with a vote flip but it sounds like Sis was the main person who said no. Normally, I would think that was weird since she’s the main person who wanted to keep him but this is Sis we’re talking about. She sits around talking about falling for Jack, doesn’t play the game but then once a week, she jumps up and becomes extremely opinionated about something, so this doesn’t surprise me.

While Jack was turning on Jackson, Jackson was busy telling Beth the only people he trusted was Jack and Beth.  I said in the recap yesterday,  I’ve never felt like Jack actually even liked Jackson and I still stand by this.  He just doesn’t like him as a person. When Jackson gave his last pitch to Jack and was telling him Jack was playing with his heart and wasn’t using logic,  Jackson was correct.  What Jackson failed to see was that he’s doing the same thing with Jack.

Unless there something I missed, and I’m sure there is because yesterday was so busy, it seems the reason Kat was so upset with Jackson was because he told Jack about Beth and Kat knowing each other preseason. Jackson did this trying to convince Jack they could believe the things Kat was saying. (This was when Jack was saying maybe Kat and Cliff were lying aout Christie) Jacksons argument obviously this had the opposite effect and it just made Jack and Tommy want to break up a trio. Tommy and Christie have been convinced all 3 of them knew each other because Jack followed Beth on Instagram. (We’ve learned casting doesn’t fish for hgs out of a very large pond so it isn’t surprising to me at all)

Anyway, all this is what led to the possibility of Sam staying in the house. There was an hour or two we didn’t see and ended up with a 9 – 0 vote. Regarding the episode, I’m just gonna come out and say it it was a total shit show. After Julie says it’s all up in the air, do they show footage of last minute scheming?  No, we have to watch Tommy’s flash mob dance instead!! Casting loves him so they can’t be depended on to say “Hey Tommy, BB16 called and they want their Frankie Grande back.” I’m sorry, but at least Frankie, as annoying as he was, had a little glitter and pizazz.

Unrelated (sort of)- My 7 year old granddaughter has been with me for a couple of days because she somehow appointed herself the supervisor of this move. She really just likes playing with the boxes and tape.  I looked up the other evening and she was watching a kids show called Henry Danger. Frankie was on it and he plays the bad guy.  I thought to myself, why can’t we escape this person? She watches BB with me when she’s here which hasn’t been much this season. (Show, not feeds. Thought I should clarify that one)  I was surprised last night when the show started and she began rambling about what a dork Nick was for crying last week, how she was glad Bella left and said she didn’t want Sam or Kat to go home. I didn’t know she was following along with the show. She’s 7 so she was mostly just disappointed she didn’t get to see a comp last night.  She loved Kaitlin last summer but made fun of her for not being able to do her puzzle. She also made me nervous during CBB because she said I was just like Brandi Glanville. I hoped it was only the blonde hair at the time! I dont know what the hell she was seeing, I promise.

Anyway, I’ve gotten way off topic. After feeds came back last night, Jess had won the hoh. I saw a lot of shock and surprise but I’m not sure why. She came in 2nd to Jack in the fireworks comp which would have been similar to this. Jess has always like Christie so obviously she’s safe but she seems to want Jack out. Kat wants to backdoor Jackson. Nicole was smart enough to point out, if the 6 has split and it’s 4 against 2, they don’t want to help side with 4 people. This is what the outsiders have been waiting on, evening out the numbers.

Christie’s sworn to Jess she won’t use her power. haha Bath talked to Sis, Tommy and Jack and threq Jackson under the bus a little bit. Jack was upset and hoped he wasn’t making a mistake. He’s still bothered by Jackson telling him that he broke his heart. Kat may have woken up and realized she’s actually playing BB since she had a close call with eviction.

Kat and Beth had a disagreement over Jackson because Kats realizing everything she’s tell Jackson and Beth in confidence has gotten out. (Kat and Beth are trying to convince people they don’t know each other and that Jackson made it up) I don’t know if this is the only thing Kat’s upset over or if she’s found out other things that he’s told.  Kat told Beth how disrespectful and aggressive she thinks Jackson behaves. Beth got mad and told her to be careful with her words and saying things like aggressive sounds bad when you put it out there. Kat said “I’m not the one who’s been called in the DR over things I’ve said on TV, he is.” Kat also told her,  as her friend, she was trying to look out for her. I used to feel more sympathy for Kat for the way Jackson treated her but after she went around the house telling people how amazing she thought he was a couple of days ago, I’m kind of over it.  I mean, Jackson IS aggressive, rude and childish but if she only thinks he is half the time, then whatever. 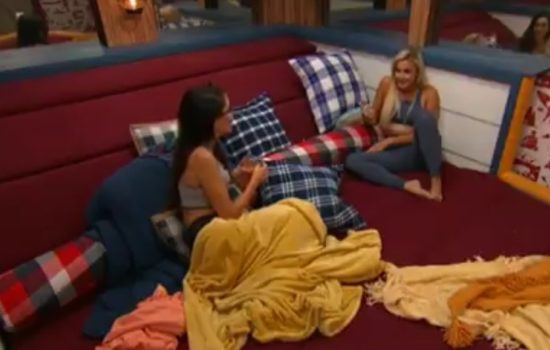 Cliffs angel celebrated in the hoh room and before that, Jess and Nicole did a little cheers and shared a drink to celebrate. Jess made a comment about getting a room that was bug infested. Jess preaches womens empowerment but she makes excuses for the guys behavior all the time. She still isn’t going to put a woman on the block though. 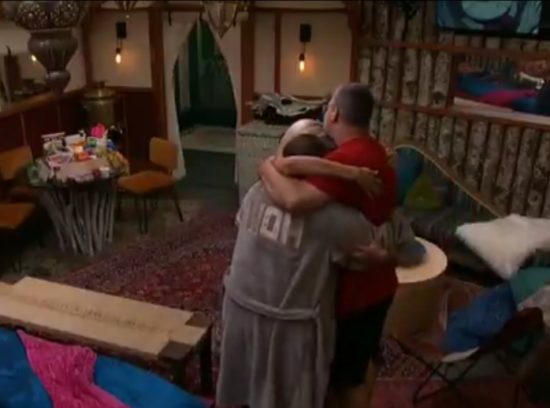 The positive: Jess appears to want Jack out.

There’s a long clip of a feeds leak that happened just before the show aired. I haven’t had time to watch it yet but if it has anything informative, I’ll share it once I’ve had the time. I’ve heard a lot of it is just the audio so I may put it on while I’m doing some morning packing. By the time I do another recap, some of you will have seen it, heard it and discussed it already so it probably won’t matter.

Thoughts on the Field Trip Twist:

I know there’s a lot of confusion regarding this twist. The voting does NOT apply to what happens this week. It’s for next week, so not only will we not know who’s on the block during voting, we don’t even know who the hoh will be. (This is a mess!!)  Everyone can obviously use their own strategy with their votes but I think the tv only viewers could accidentally send home someone they like if they’re not careful. Trying to keep someone safe could land another one you like as a nominee. Wouldn’t it be better to keep your faves out of the 3 person competition to begin with? Whoever comes in 4th or 5th in the votes could potentially be the person on the block.  For example, if the top 3 vote getters are HOH and the two noms next week, production may go with numbers 4 and 5 and 6. I’m sleep deprived and possibly not thinking clearly so feel free to correct me if I’m looking at this wrong.  The way I’m seeing it, the top vote getters ALL need to be people in the 6 Shooters. (If that’s who you want out) #TwistsSuck

I won’t have recap tomorrow because that’s the actual day of my move so have a great Friday and weekend.