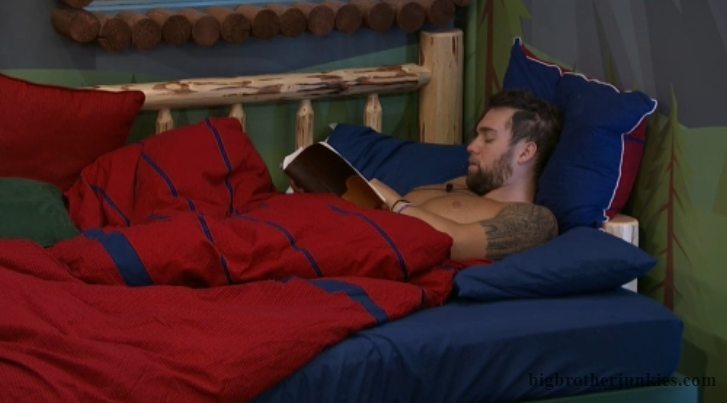 Welcome to Tuesday. There is nothing really to talk about so let’s jump right into the feeds….

Well, there isn’t a ton to talk about except for what happened last night which is the house had someone yelling over the wall about Tommy and Christie knowing each other.  It’s hard to say for certain because the feeds cut for about an hour and when they returned, everyone was acting incredibly strange. Cliff and Tommy were the only people outside when it happened, but Jackson and Holly made reference to something being said and then feeds cut again.

This would have been a much bigger story if Christie wasn’t going to jury in a few days, but this definitely screws Tommy’s game if people believe it. He was on cruise control to the final 3 but if people are convinced that someone in the jury knows him in real life, there is no way they’re going to want to sit next to him in the final 2. Then again, these are the same people who didn’t even start getting paranoid about them knowing each other when they found out how close they lived to one another.

Before I begin, I am not sure if they have been going through but I have been thanking everyone who has donated via email. I just realized the emails may have just gone back to PayPal so if you have donated this year, I am really humbled and thank you.

Analyse keeps looking at the camera and begging for a twist that will keep her and Christie safe. Stop. Please. Both of you competed in a penalty competition that America voted on. If there was a twist, do you really think they’re going to rush out and vote to keep either? I am beginning to feel bad at how delusional she is.

Nick is explaining what happened yesterday (how he didn’t throw the HoH competition and had to defend himself). He is re-telling his conversation with Christie 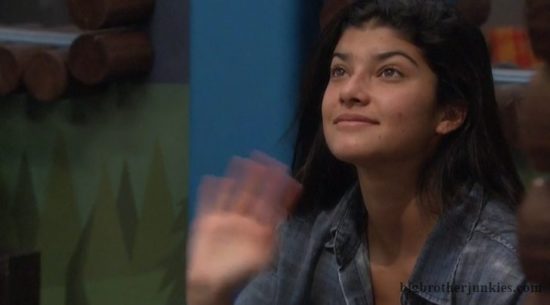 11:50 am – The bitchfest against Christie by Nick has stopped as Holly and Cliff have entered the room.  Nick says he was half-dreaming and he thinks he was rubbing Tommy’s penis. Tommy says he doesn’t think so. Nick says he has to turn the other way when he’s laying with Tommy so he doesn’t poke him with his…

2:00 pm – Christie is having a pity party in the living room

Tommy is asking production to put on a movie because they’re all breaking. He says ‘I almost feel like we’re not even fun’ (you’re right) 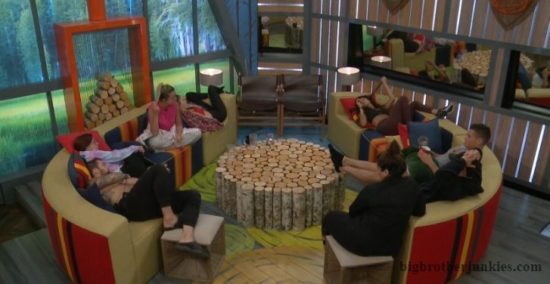 4:00 pm – Christie heads into the HoH room to chat with Jackson 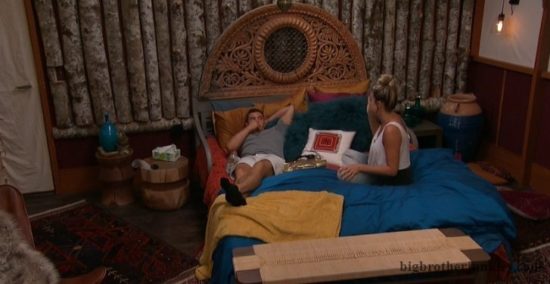 She’s worried because she can’t campaign because Analyse is obviously well liked in the house, but she knows she (Christie) loves this game and wants to stay. More of Christie ‘not’ campaigning

Christie wishes she had someone in the game to protect her the way Sis has Nick. lol. Ok, Ms. Huge Advantage Knowing Tommy

Jackson says that Nick admits he was probably going to throw the last HoH. It would explain how he was off to such a fast start then slowly dropped to 3rd place

I will say, Dan’s Funeral, this is not. Just saying you’re mad at one person and he’s your target doesn’t sound like a very great deal. I mean she has a few things going for her argument but it wouldn’t be enough to sway me if I were Jackson. She’s just far too big of a threat and you gotta take your shot just like you did when Jack was up.

Jackson is really pushing for her to do it tonight. I’ll have to watch during dinner

6:00 pm – Nicole and Tommy made puppets while we wait for dinner 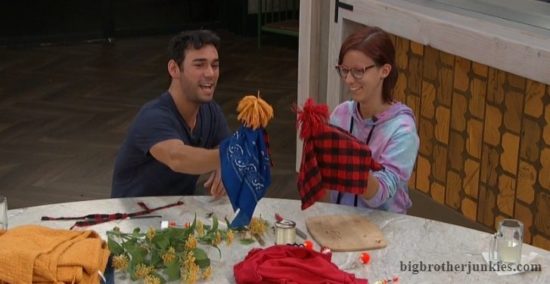 7:00 pm – Holly is STILL cooking. Let’s get this taco tuesday show on the road! I want to see if Christie causes problems

Breaking News – Christie appears to be wimping out of her Taco Tuesday Throwdown with Nick. BOOOOOOOOOO

7:30 pm – Nick heads into the HoH room and tells Jackson he overheard Christie saying she was going to blow up during taco Tuesday. Nick asks why she hates him so much

Nick is getting himself all worked up in the HoH room. Yes, Taco Tuesday may still be on! 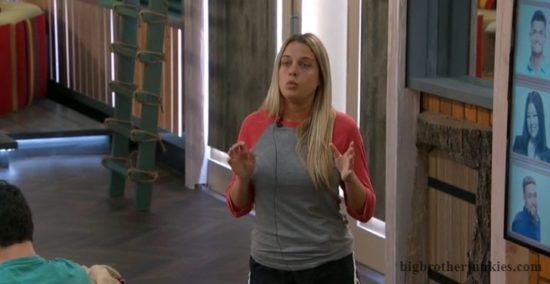 Christie was in the HoH room and Nick comes to the room. She opens and he starts swearing and asks if she wants to argue. They go downstairs to the kitchen.

Christie starts talking and Nick says that he debunked her stuff in the room. Christie says ‘okay now you’re going to use those words to make people feel stupid’ (debunked is a big word?)

Meanwhile, Tommy is desperately trying to pretend none of this is happening around him 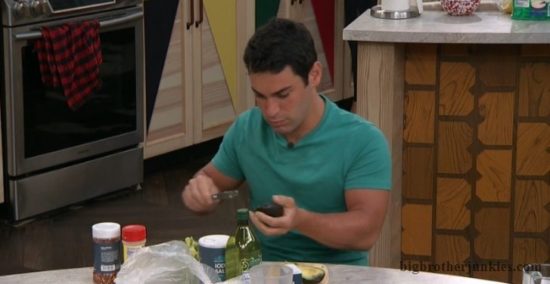 Christie is saying how she thinks Nick’s game has been great. She tells him what she was going to say ‘Nick, which side are you on’ and she tells Nick he can do his rant when she’s done talking

Nick says ‘let’s blow my shit up now that everyone is here’ and she says it’s not about blowing up his game. She calls him dramatic.

Nick starts calling Christie’s lack of loyalty by putting dates to her issues.  ‘day 7 you said this’ ‘day 15 you said this’ … even though he’s probably making up dates

Jess appears to be enjoying this 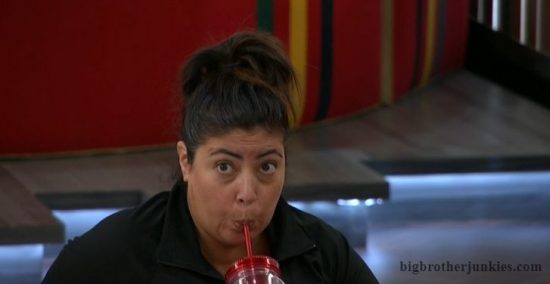 Nick tells her to manifest the truth hahaha

Christie admits that she was going to target Jackson first.  Christie says something was a lie and Nick freaks out and starts yelling. Christie says he’s scared.  Christie does a ‘show of hands, if Nick wins HoH, who feels safe’ to prove that Nick is just playing the middle. Christie says he’ll keep throwing HoHs. Nick says ‘I’m not fucking throwing comps, cuz’. Christie thinks he threw the slip and slide comp 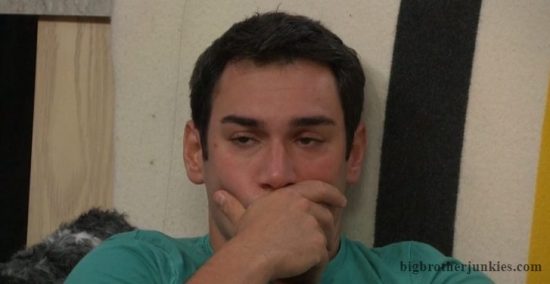 Nick and Christie are going back and forth arguing about the same garbage. I am just having fun watching Tommy try to be invisible

They have brought up Kemi and Jack possibly backdooring Christie.  This is going back to the beginning. Meanwhile, the poor tacos are getting cold. Going to be Taco Wednesday by the time they eat

Jackson is loving this 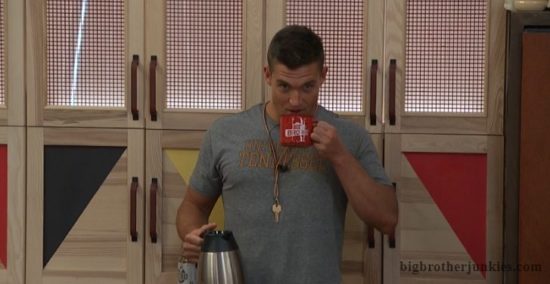 Christie makes fun of Nick saying how everyone trusts him and how he feels bad about it. She then says ‘happy taco tuesday’ hahaha

Christie points out how back when Bella was on the block, Nick was going to try to make Cliff break his word so Nick just uses other people to lie

She hammers Nick on trying to make Cliff lie. She then tells Jess not to worry because Nick isn’t going to try to win HoH 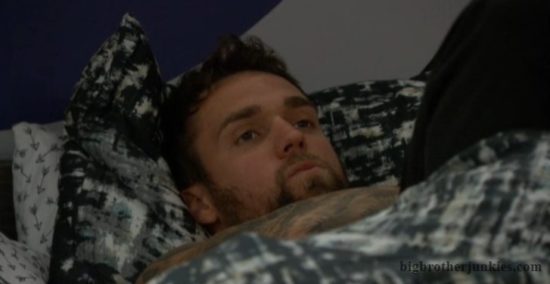 Sis comes in and asks Nick what’s wrong.  What?

Tommy comes in so he can comfort Nick. Work that jury, Tommy. Work it

Ok, fight is done, taking a break then writing up my overnight!