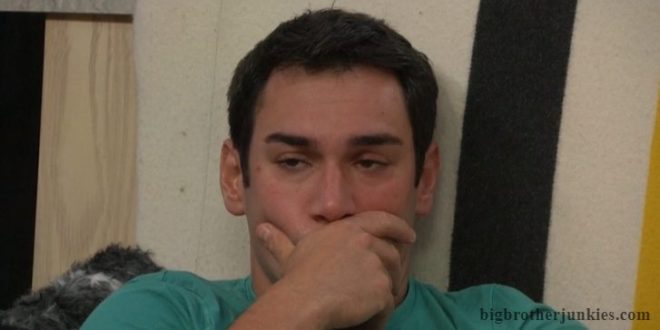 Taco Tuesday was on! I’m not going to lie, I was starting to expect that it was going to be a dud, but Nick got himself all fired up and ended up starting the whole thing! I had a feeling once Christie was backing out that Nick was going to carry the torch and start up the fight, and sure enough!

Nick overheard Christie say she was going to go off on him during dinner so he was fired up. He went up to the HoH room to vent to Jackson about it and got himself more fired up. After leaving the room and storming around a bit, Christie made her way up to the HoH room to find out what Nick was talking about. Midway through the conversation, Nick knocks on the door and starts yelling at Christie!

She asks if he wants to move it to the kitchen so everyone can be involved and he agrees. They head downstairs and Christie gathers up the house so they can listen in on the argument. Kind of weird, but I’ll still take it.

The argument didn’t actually have a lot of substance, it was basically Christie pointing out how Nick was playing the middle while Nick pointed out that Christie was disloyal to her crew. They basically repeated that talking point in various forms of yelling for a solid half-hour or so while the food that took Holly FOREVER to cook got cold. It was a fun argument because it was an argument, but it ended up being just two people blowing off steam because everyone just resumed what they were doing after.

Well, most people. Tommy kept sinking further and further into his seat during the argument likely just hoping Christie doesn’t mention him. It was actually more entertaining to watch him during it than it was to watch the argument. Nick then slipped away to the be bedroom to cry (which I actually thought Christie was going to do) and Tommy went to comfort him. Tommy is really working that jury vote seeing as he knows Christie’s is a lock.

The result of this is that Sis is now back to worrying she may be going home because the house may keep Christie to go after Nick. Nick’s game is basically blown up as he’ll likely be out the door soon. And Christie? Well, she’s likely still leaving on Thursday night so Sis probably doesn’t actually have to worry. I think even if Christie moved the needle tonight, she still has to get 4 out of 6 votes to avoid the tie which is a huge hill to climb. Especially when she knows she’s not getting Nick’s vote.  I’ll count the votes better tomorrow but it’s super unlikely Christie can get 4.

Alright, updates in the comment section. Have a good night!