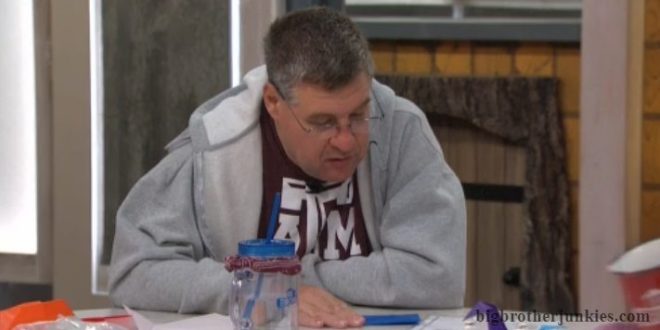 I want to give Big Brother a huge thank you for giving these people some paper and an origami guide because that’s literally what they’ve been doing all afternoon long and it’s slowly killing me. I hate that the house is already in final 3 mode with 2 weeks left in the season. The only bit of entertainment we’ve had the last few days has been Holly freaking out about Jackson potentially going on ‘The Challenge’ at some point, and she’s likely walking out the door on Thursday.

Hopefully things will be fun tomorrow if/when she realizes that she very well could be leaving. She was a mess for the brief period on Saturday when she realized she wasn’t safe. Let’s get that going again. Maybe the DR can put that in her ear so she starts to worry?

On a random note, it’s funny how the house was 6-4 in favor of the girls and was close to 6-3 until the house flipped on Kat over Cliff. Now it’ll be 3-1 in favor of the guys after Thursday which will mean 5 of the last 6 evicted have been women. Not that it really means anything overall but it’s just something I thought of early in the season when the guys were hurting.

I’ll keep watching the feeds to see if anything happens tonight but hopefully something will otherwise Mel is going to have a very quick update tomorrow morning.

4:00 pm – Feeds back, everyone in the HoH room. May have just been a lockdown.