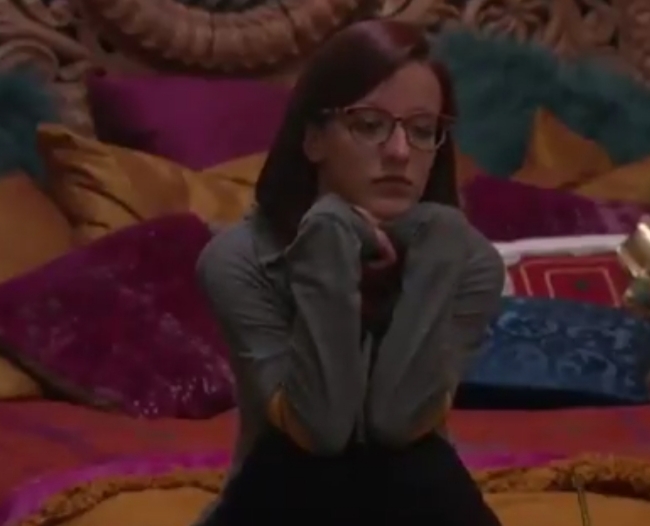 The plan is still to keep Nicole this week and it was a pretty chill day in the BB house. This pic is a few days old of Nicole, i just liked it. There was plenty of trash talk mixed with a little game talk yesterday. As usual, I’ll just go over the highlights and things that aren’t that relevant but stood out to me.

Tommy and Sis talked the day before about telling Nick about the vote or at least trying to sway him with Nicole staying. They both recognize they aren’t in a bad place with Nick or Bella and it doesn’t benefit them to blindside him. This didn’t happen yesterday but it still could before Thursday. Tommy has now talked to Christie and Jack about it.

Tommy’s also been trying to gradually move the target from Nick to Sam since Sam won his 2nd veto. He plants seeds here and there and when he finally makes his pitch, other people think they came up with it. He’s doing it with the jackoffs about Sam and I’ve seen him do it with Sis over Jack. Tommy and the jackoffs have decided not to explain anything after they keep Nicole. Jackson suggested they just go into the backyard for the hoh comp and not say anything. Tommy said he wants to win hoh, nom Nick and Bella and say he has chosen a side and after being the moderator for all the conversations,  he thinks they were bullies to Nicole. His real target will be a Sam backdoor. Jack, Jackson and Christie like this plan.  They want to get rid of Sam and force Nick and Bella to be loyal since they won’t have anyone left after Sam leaves. Yep, they think they can blindside them with the Nicole vote, offer no explanation, put Nick and Bella otb, take one of them off and backdoor Nick’s close pal Sam and somehow keep them loyal to H8ful. Tommy is a good player so surely he’s just saying this but has no intention of winning the hoh. If not, he isn’t a very good player because that’s just stupid! Beth (Holly) and Sis are on board with everything too except Sis won’t commit to making Sam her target. She probably wants Bella out. (I doubt Sis will be hoh unless the comp involves being timed on how fast you can strip down and jump into the hoh shower)

Hating Kemi was once again the theme of the day. Here are a few of the things Kemi was found guilty of yesterday from H8ful:

Christie couldn’t get her clothes to dry from all the lint in the dryer vent trap. She said it was taking “hours and hours.” She and Jack are sure Kemi must’ve done it. ( I don’t know why she didn’t check the lint trap when she first put her clothes in the dryer but I guess I just get these crazy ideas about things) They’re also sure Kemi hid the clothes bag Christie lost or couldn’t find. (You know, the one production took away from her once she wasn’t hoh anymore) She made it clear to all that touching anyones clothes is very disrespectful and shouldn’t be tolerated. Well….the night before, Cristie snuck into Kemis bag and took her camp comeback swimsuit without Kemi knowing so Kat could model it for Sis and herself. You remember Kat, the one who doesn’t ever wear underwear: 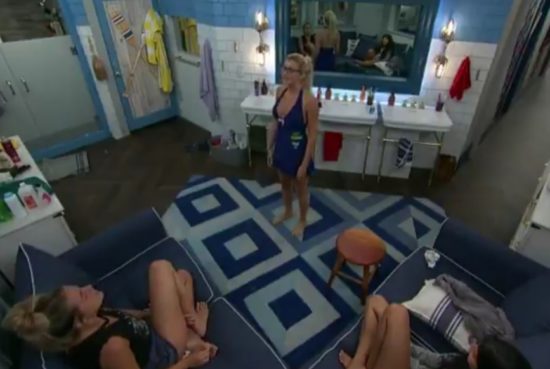 Jack gave another monologue about Kemis lack of helping around the house. Sis (I think, but it could’ve been Beth aka Holly) said BB should pay them extra money for chores or something like that as an incentive for Kemi to help. (I’ve NEVER seen Sis lift a finger to do anything and her own alliance talks about it) Jack made a comment about how broke Kemi would be if BB did something like the bonus pay. While this was going on, Kemi was inside helping clean up from dinner and washing dishes. (If BB paid them for every day they didn’t behave like a big douche bag, Jack would leave in debt!)

Kemi also sat on the end of a couch Christie was trying to lay on because of her PMS…have you heard about her PMS? There’s a lot of talk about Christie’s PMS and anyway…it wasn’t nice that Kemi sat there when Christie wanted to nap….in the common areas of the house…..where they aren’t supposed to nap…. but Christie has PMS so it doesn’t matter….and Kemi should also be in trouble for lying about a power…..even tho Kemi was misinformed about the power and wasn’t really lying…..which happens all the time in the game….and even tho Christie intentionally lied about a power….anyway, it was disgraceful and rude when Kemi sat on that couch!!! This is Christie telling the very traumatic couch story: 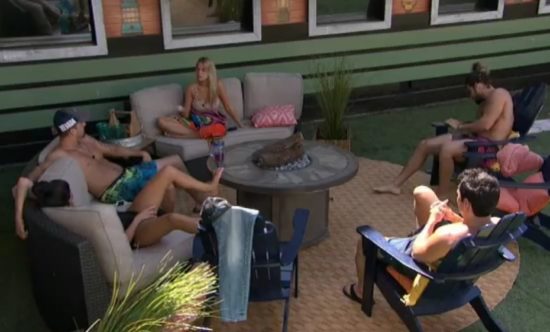 Before the laundry bag incident was sorted out, Bella was upstairs going through Kemis things looking for it since Kemi must’ve stolen it: 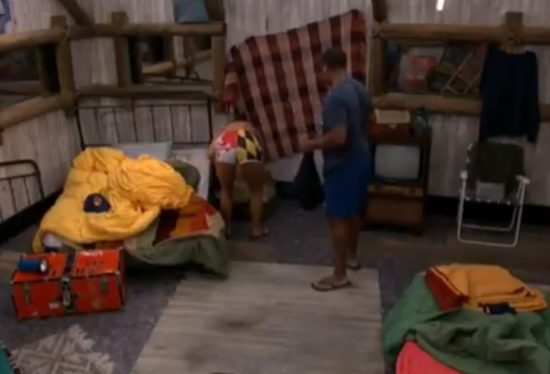 David told Bella he saw a bag in the storage room earlier (Nicks, since he’s hoh) but he didn’t mention it to Christie because he didn’t want her to think he took it. (He’d told Kat he saw it and Kat is the one who said not to tell Chroatie because “she’ll think you stole it”) David asked Bella not to say anything as they walked together towards the storage room. Bella sped up and actually started running so she could beat David in there. By the time he walked in, Bella was just finishing telling Christie what David said. Christie assured him she didn’t think he took it. (Of course he didn’t, Kemi had to be the one who did it) This is Bella saying “I had to tell her” as David walked in: 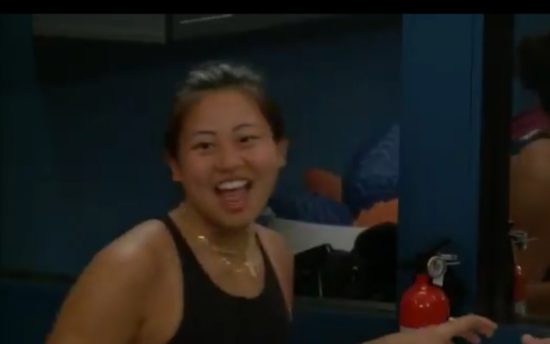 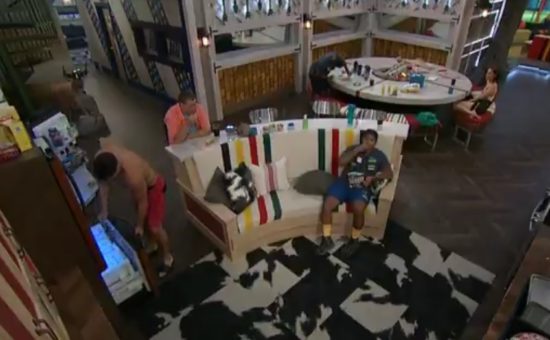 This is also Jackson being considerate of his fellow hg’s while drinking from the cartons: 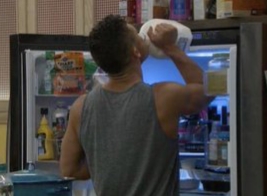 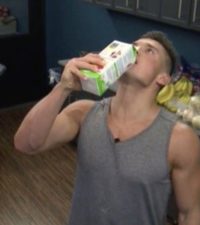 Boy, it sure is a good thing Kemi stopped putting her water bottle in the frig because that was a real problem!

Im not sure if we’ve covered how food obsessed and food controlling Jackson can be. Jack does it too but nothing like Jackson. Someone on Reddit tracked what Jackson ate in one day just out of curiosity since he’s the food police. They made it clear they weren’t food shaming him and no one should care what he eats. It’s more about Jackson acting like they’re on Survivor level food rationing….well, everyone except Jackson. This wasn’t an unusual day for him either: 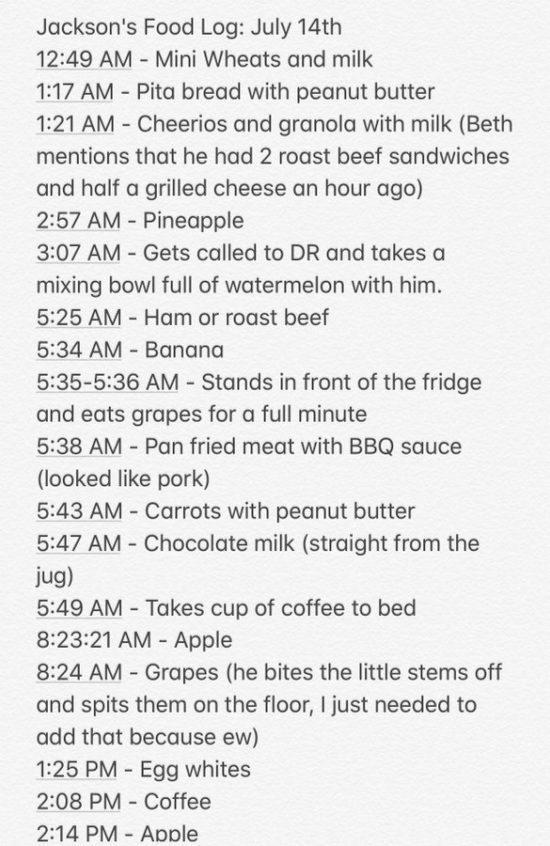 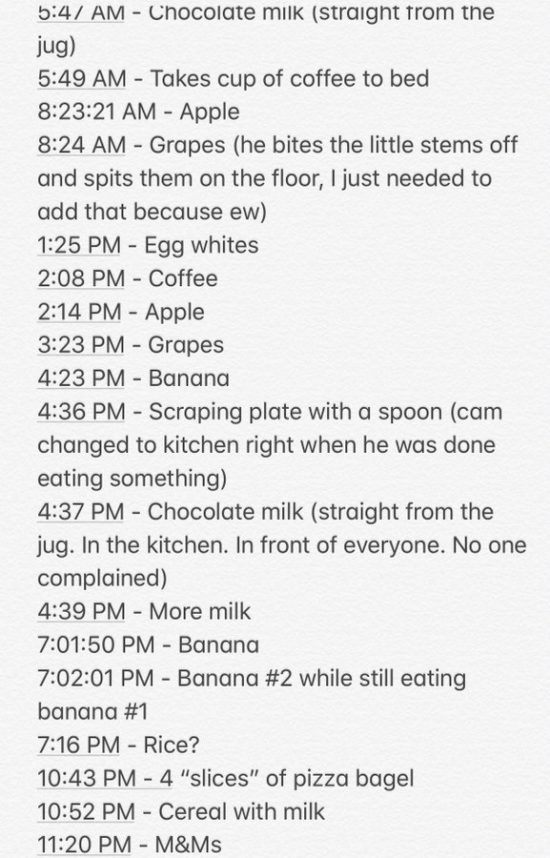 Kemi and Nicole worked on Nicole’s speech for Thursday. It had something to do with a bag with ping pong or some kind of balls inside. Nicole talked about handing them to Nick and saying “I found your balls Nick. Bella had them.” I dont know if it’s a joke or if she plans to do it but they’re funny together.

One of my favorites moments with these two was a while back when Kemi was evicted and Nicole was becoming the house enemy:

There’s also this moment while they were talking about Bella:

Here’s one of Cliff simply because I never take any of Cliff and after Thursday, we probably won’t see him anymore:

David talked to Sam about how sick he is of Jack. David is losing patience with Jacks condescending comments and he’s becoming more vocal about it. There was a situation over Jack saying something while David was under water in the pool. Davod jumped in the pool with either his socks on or all his clothes after a work out and Jack didn’t like it. (Truthfully, I wouldn’t like it either but it’s better than being there the seasons when people are peeing in it) David was bothered over Jack saying something when he couldn’t hear instead of telling him directly. I don’t know if talking to Sam was strategy and hoping Sam and maybe Nick would work with him if he comes back or just David venting. Sam liked hearing it because he’d love to break up the big group especially starting with Jack.

Sam also talked to Kemi and she said she’d put Jack and Jackson otb if she came back and won hoh. Sam explained to her that Jess didn’t have a power and asked why she said she did. Kemi explained it’s what she was told. (True) Sam said he knew who had it (Christie) but wouldn’t tell her yet. He didn’t want it to come back to bite him if she told.

Sam rushed to tell Nick and Bella about his talks with David and Kemi. Sam still doesn’t realize they will tell Jack, especially Bella. Sam told them David is sick of Jack calling him kid, rookie and bud. Nick said “Jack calls everyone that though” and Sam said “yeah, but let’s not make excuses for Satan.” (Ok Sam, for that dig, you can stay for a while longer)

David and Ovi talk a lot and today they talked about the pictures of the evicted hg’s and what they all have in common. They both mentioned being treated differently at times in their real lives so would never do that to someone in the game.  They said they wouldn’t treat people badly or the way they’ve been treated if the situation were reversed. (CBS won’t be showing any of that, I’m sure) David also mentioned knowing Kat was flirting with him in the hopes of using him as a back up plan if he comes back. Ok, to lighten it back up a bit, this was a couple days ago when Christie and David had a staring contest. David won:

Jackson thawed about 500 pounds of meat (on the dining room table which I found a bit weird) but once it was ready, he didn’t feel like cooking. He made a big deal out of this being the first day in 28 days he hadn’t helped make dinner. Jess volunteered and the jackoffs stressed the entire time. They were worried about how much of the meat she would use and said they needed to go check. (Remember when Christie was going to use some lettuce and had to ask Jack first? He told her no and she didn’t use it.) I’m soooooo hoping they can both be have nots! It was taco night and David was anxiously waiting for them. David is also sick of Jackson putting every seasoning known in existence on chicken and throwing it in the oven so he was probably happy with something a little different. Jackson made sure he was in the taco line too: 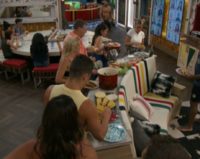 Christie saved a little venom for others and didn’t use it all up on Kemi. She recently said she was sickened by Bella talking with food in her mouth so here’s Christie during dinner last night. (She was talking too):

Christie told some of the group about Kemi saying there were couples the first week. This was just game talk and casual game talk at that. Kemi likes Christie and feels somewhat comfortable talking to her. Christie was livid over Kemi lying about there being couples formed the first week. This was so offensive to everyone, Nick said he wanted to spit on Kemi, she was a piece of shit and he should spit on her right between the eyes. Nicole overheard it but didn’t hear who they were talking about. Kemi is sure it was about her. She said if anyone spit on her, she’d break their f**king jaw.”

I’m sorry I couldn’t report about taco night being such a big hit, that it got everyone to hug, make up and agree to play the game with normal levels of lies, trickery and deceit. That’s just not who these people are.