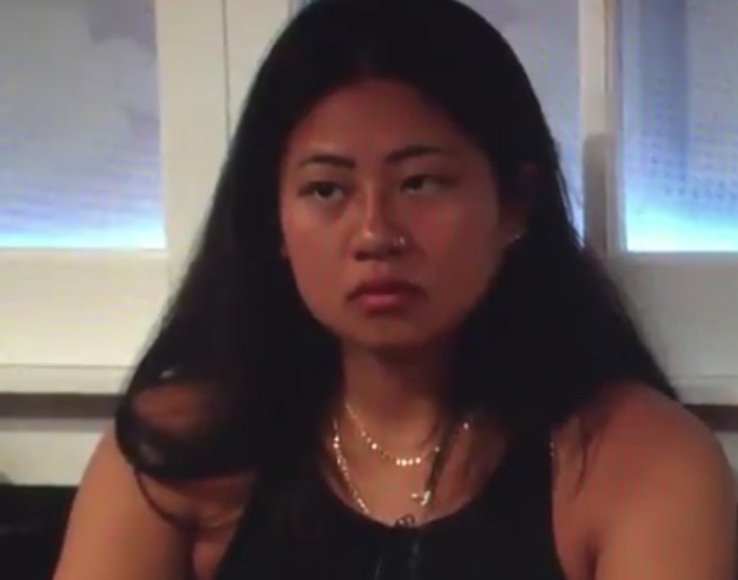 Good morning, I hope you guys are hanging in there this week. Some weeks are worse than others and this is a bad one. This is usually when I would start complaining but I must’ve slept well because I’m not gonna do it. Instead, I’m going to focus on what little did happen yesterday… there will be one small rant about have nots so you’ve been warned. (Sleep or no sleep, I can’t be completely nice)

Yesterday was mainly regrouping for the outsiders mixed with a little complaining from  the 6 Shooters about Jackson. Christie notices every annoying thing Jackson does now and so does Kat. They’re tired of making all the slop food to snack on later and Jackson eating all of it in the middle of the night. They don’t like the way he treats HollyBeth either. (See, I read comments and I compromised on her name for the FB readers so there won’t be any confusion) Jess, who seemed to really like him, is sick of him too. I was worried because even though we see Jackson, he appeared to have them snowed. Kat told Chriatie she was frustrated over things he’d said about her because she said she wouldn’t stand for it in her real life.

Christie and Kat keep getting closer and Jess may trust Christie more than anyone in the house. Jess is a terrible player but I finally get why she’s handing the 6 the game. (In her mind) She tried and failed to make the womens alliance and like Nicole, when she got caught, she got scared. Also like Nicole, shes trying to put her head down and hopes to be ignored. I thought all of it came from her fear of making any moves but it’s actually ALL because of Christie. She thinks the 6 will break and thinks Christie will form something new with her when it happens. It’s why she could hear them talk about the 8 and do nothing about it. Jess doesn’t care about the 8 because she thinks THEY are the ones Christie is lying to and is convinced they’ll seperate. Kat and Jess told Cliff they trust Christie the most from the other side. (Sure, Kat’s a mole but Jess is sincere. Kat does trust Christie, she just trusts HollyBeth more) Ciff also thinks Christie is the best of the 6 and the most willing to work with them. She has them all convinced she doesn’t plan on going to the end with the couples. Nicole is the least vocal but she still talks to Christie too.

While I’m on Kat, I’ve read comments criticizing Cliff this week and I agree with some of them but not about Kat.  I think there’s an unrealistic expectation being put on him.  Even though I’ve covered this, people still may not be aware of the situation. A lot of people didn’t understand why Cliff couldn’t work harder to pull in Kat and Jess so they would have the votes to make it a tie.  Cliff did attempt to do this and Kat was very clear with him that she would not be voting out Jack.  The reality is, if he doesn’t get Kat, he doesn’t get Jess. Not that it even matters because without Kat, the votes simply aren’t there.  I can’t stress enough how strong a pre-game relationship is in this game and I feel it’s being overlooked. No amount of campaigning is going to get Kat to vote opposite of HollyBeth.  It’s like expecting Christie to turn on Tommy. Sure it may happen sometime around the final 4 or 3 and maybe not even at all.  I think the Kat and HollyBeth relationship gets overlooked because Kat spends so much time with the other side of the house but they said from the beginning, they didn’t want to appear to be close. This one isn’t on Cliff, period.

Kat and Nicole cleaned Cliffs room, he thanked them and after Jess came up, they posed for the ‘done it a thousand times’ pose of Charlie’s Angel’s. One of them said “Cliffs Angel’s” and he cringed. Jess suggested “Hoggs Honeys.” He didn’t like that either. What happened to all of Jess’ womens empowerment? Now she’s a Hogg Honey? 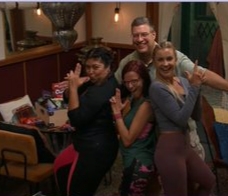 Jackson and HollyBeth patched things up.  It may have been because HollyBeth pretty much agreed with everything he said and let him have his way or it could be because they didn’t spend as much time together. Jackson spent half the day in the DR and when he wasn’t in there, he complained about being called into the DR. A lot of people have been wondering if it has something to do with all the food he’s been eating in the shower.  Jack even called him out for using powdered sugar on something. Jackson said “what are they gonna do about it?” Sugar is on the list of what they can have but apparantly, powered is not.  Honestly, it’s still sugar at least. I’d be more worried about the side of beef he seems to be hauling into the shower stall to knaw on.

Tme out for my have not rant: This happens every year because there’s always someone who cheats. The fans watch for it, become furious when it happens and rage online about the injustice of it all. (I’ve been guilty myself) You would’ve thought I was Kryssie going for that rule book when Alex (or Morgan) slipped up and ate a dorito during OTT.  I needed her punished, ejected, tarred and feathered. She’d only been a have not for a few minutes and didn’t even do it on purpose.  I think it was more something to do with her hands while she was talking and out of habit. Didn’t matter, I thought it was the crime of the century.  For the record, that’s not what’s happening with Jackson.  He does this many times a day and he’s blatantly obvious about it. We’ve seen people be penalized in the past so it upsets us when BB isn’t consistent. I think what we fail to realize sometimes is they are consistent. In recent years, they are consistently not too concerned over the cheating.  Yes, they’ll drag someone into the DR and probably give them a lecture and tell them to stop doing it. They only address it when they have to and that’s only if it’s going to effect the show. It’s one of the several reasons I think continuing have nots is stupid.  There was a time when people actually got punished for this and it’s one of the ways BB has changed.  Have nots arn’t part of the episodes anymore and because of that, think about the extra editing that would be required for the show if Jackson had a punishment.  They have to explain a penalty nom or penalty vote or whatever else to the audience. For them to explain it, theyll have to devote part of an episode to people becoming have nots, who they are and showing Jackson breaking the rules. Unless you’re watching the feeds, there isn’t a back story to go with it so they have to take the time to create it.  I’m just saying, if you’re the way I used to be, do yourself a favor and save your anger for something else because they don’t care. I’ve harped on the old food comps in the past and saying I wish they’d bring them back. (This was me not accepting how BB has changed) I still think they should bring them back instead of having have nots and it’s not because I’m stuck in the past. (well at least that’s not the only reason) They stopped doing them, in part, because it used up too much time on Sundays episodes.  That would make sense if they were going to devote that time to strategy and game conversation.  Instead, they feel the need to have more comps because many TV viewers enjoy watching that part of the show. If they want comps, why not have food comps instead of whacktivity, battle of the block, etc.? Instead of creating twists to create drama, which can unfairly end someone’s game, let food comps create the drama and targets. There’s always the hero who gets them beer or the person who sacrifices protein for the week (pissing off the house) because they’ve been missing kale. There’s more potential for conflict among the players with food comps than having people raise their hands to volunteer for HN’s because it’s their turn to do it. HN’s was a great idea for the All Star season to raise the stakes a little. Other than that, I don’t see the point. Having said all that, I’m a bit of a hypocrite because I AM enjoying Jackson having to be on slop this week. (It’s because he’s a jackass, not because have nots is a good idea)

Ok, moving on…I like this pic of Kat and thought it was funny: 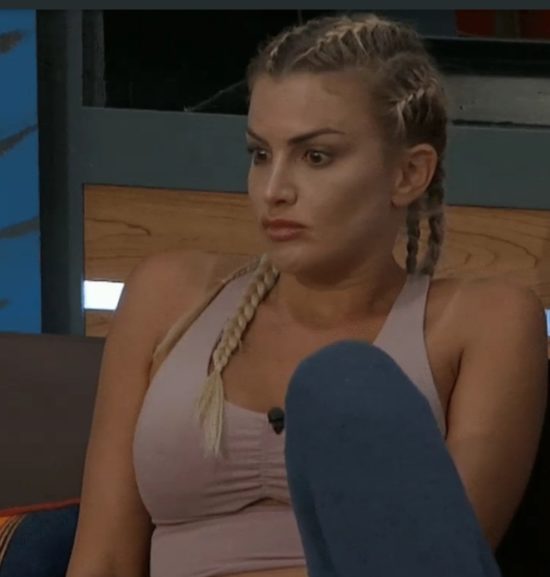 Jackson thinks he’s like Cody from BB19 when he’s in the DR. He said sometimes “I do funny shit in there” and said they like to ask him about it. (How funny are you when you have to tell people you’re funny?)

Christie got emotional and cried because she loves Cliff so much. Dont ask me, I’m just passing on the info: 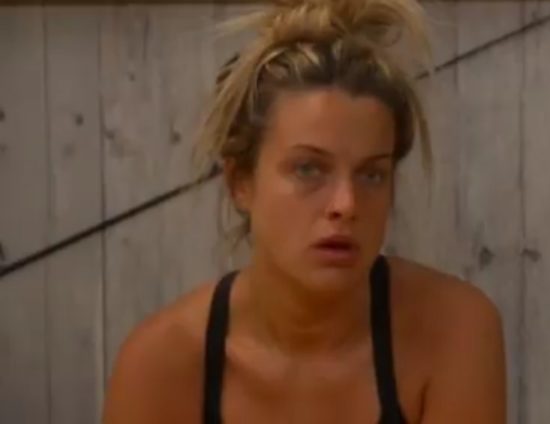 Christie has already made a rule that no deals can be made during the wall comp. (I’d have to manifest her ass being tossed over the backyard wall if I spent too much time with her)

Sis said if she could so anything she wanted, she would want to be an Instagram influencer. Way to set the bar so high there Sis. We all need to dream, I suppose: 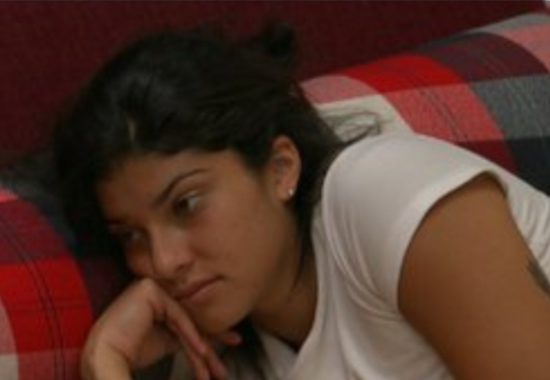 Nick talked to Tommy about the double standards in the house. Nick said he gets in trouble for talking game or saying someones name but Christie can say whatever she wants. Tommy told him maybe he just shouldn’t go there and should leave it alone: 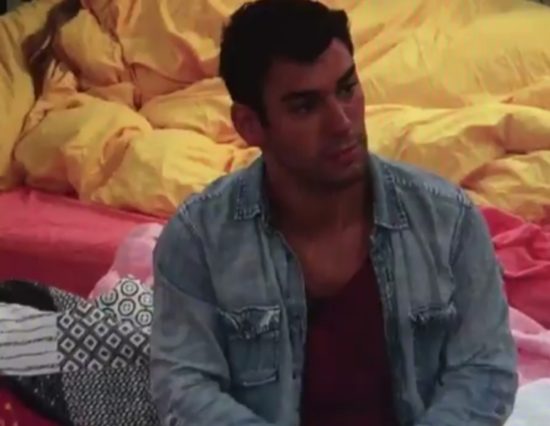 Bella did some campaigning and everything she said actually made sense. She said she would still be a target, Jack wins a lot, and so on. It won’t matter and nothing will change but at least she tried and I’m glad she did. (I still don’t like her but I’m trying to be positive today, remember?)