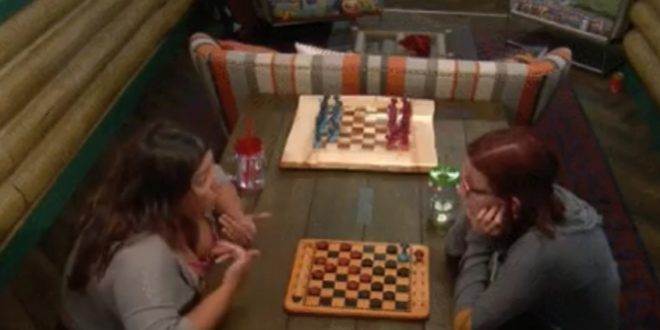 Good morning BBJ gang. Did ya’ll survive yesterdays snoozefest? The campaigning began but it was still such a slow day.  Everyone is still trying to appear good with everyone else and Jess is trying to avoid playing Big Brother. After several pep talks from Christie and Tommy, she did do some campaigning to Nicole.  I suppose we can give her credit for doing it but it’s going to be a ‘D’ for effort. If Nicole didn’t have such a big heart, I’d give it an ‘F.’  I don’t think it’s going to make a difference but because anything’s possible, I’ll stick with a ‘D.’

Everyone is lying to everyone so you can’t go off of some of the conversations they have with each other to know what they’re thinking. The game feels slow but it’s not because they aren’t playing. There’s actually an interesting dynamic happening at the moment.  I think it feels slower because no one can really show their cards yet.  This isn’t a season that’s having an open war with each other. Instead, everyone is trying to fake their way to the F4.  I usually prefer seasons like BB6 with Janelle and Howie, where there are two defined sides. Although, this type of game play  is actually more interesting to watch….if the people left were better players.  Most of them are what I’d consider average level players and that’s what’s making it feel like it’s dragging.  There isn’t anyone left in the game who hasn’t made some mistakes but they haven’t had to pay for them because they’re all working at about the same level. (Not including Jess)

As of right now, these are everyones preferences:

Obviously, all of this can change and it will as people leave the game. They’ll have to readjust their plans, the way Tommy did when Sis left. She was his perfect F2 and he’s had a hard time recovering. He and Jess are the most rigid players in the game, although Tommy’s getting better at it.  Christie is the opposite of Tommy and her game can change by the hour, because she’ll work with anyone at any time. Jackson and Beth think Cliff and Nicole would be easier to beat but they’ll take whoever is left from the other 2 duos if they can get them to target each other. The same goes for Cliff but he prefers Jackson and Beth over Christie and Tommy.

Nicole is a little different because her biggest area of reluctance for going all in with Jackson and Beth is her fear that she’s being played. She’s worried Jackson and Beth & Christie and Tommy are the real F4. It’s more about that and less about Jess this week, since she’s giving up a number (sort of) either way. I say ‘sort of’ because Jess hasn’t really been loyal to Nicole and Nicole is aware of it. For Nicole, keeping Jess will probably come down to whether or not she thinks she can believe Christie and Tommy over Jackson and Beth. She trust Cliff but that doesn’t mean she agrees with every decision he makes. I think she’s sticking with Cliff, but it’s worth looking at because once again, she’s the vote that matters.

Heres a rundown of yesterday:

That’s it for today folks but I expect more aggressive game talk today…..from Christie and Tommy.  Jackson and Beth will be after Christie regardless but I think Tommy’s really screwing up here. He can’t have it both ways. He can’t try to convince Jackson he’s really sticking with him and keep up what he’s been doing in recent weeks while simultaneously trying hard to save Jess.  Sometimes, it’s better to know when to cut someone loose even if they’re a number for your side. You should fight to keep the number IF the other side already knows you’re against them but that’s not the game Tommy’s been playing. It’s a blind spot he’s had all season imo.