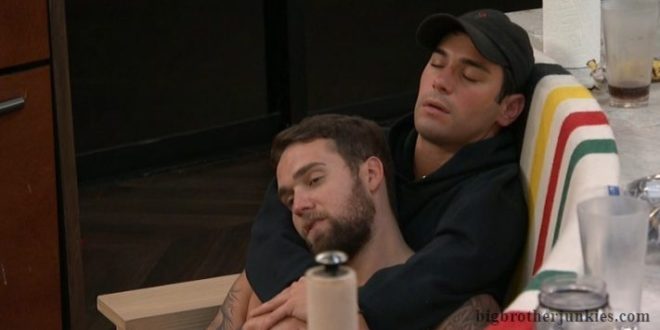 Once again, nothing going on in the house so there isn’t much to talk about. Barring some 11th hour push or a reset week, Nick is toast and Christie survives another week. Everyone thinks there will be something like a reset solely because the math doesn’t add up on the evictions remaining. After today, there will be 7 people and 4 evictions before the final 3 weekend (Sep 5th,12th, 17th,19th if they do the normal 2 evictions in final week). That means there can be no double eviction and Big Brother loves double evictions. That’s as integrated into BB lore and tradition as have-nots are and we saw how that worked out. Production clearly wanted nothing to do with HNs this year because of the camp comeback room but they still gave us two weeks of it regardless.

Seeing as they have been showing GBMs (goodbye messages) to the jury members, the chances of a battle back are slim to none. Julie would have at least mentioned it to us so that’s just not happening.

What would finish ‘prank week’ better than telling them the entire week was a prank and nobody is going home? What would be even better is if they did another prank on Holly by saying the two nominees are the only two who could play in the HOH competition. That would certainly prevent next week from just being a repeat.  The former may happen, the latter certainly won’t, so don’t worry.

The CBS episode was another average one. The filler content with the pies was okay. Zingbot was flat out bad. Old buzzard was still a big shot and pompous douchebag certainly stings but the rest were second rate. Chewing was really the only thing they could tease about Christie? A bowl cut for Nick? Zingbot has seen better days.

So that’s about it. BBAD updates will be in the comments! See you tomorrow