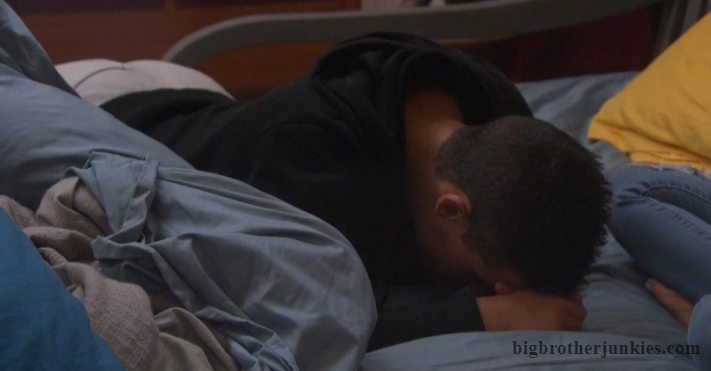 Here we are once again with another Wednesday with a ton of game talk to make up for the complete lack of any throughout the week.

Holly has been making her rounds tonight trying to campaign and she’s pretty terrible at it. Listening to it was absolutely painful as she decided to go with the pity party route rather than anything of substance. To make matters worse, she was clearly lying so how can you take her seriously?

Her main pitch to Cliff and Nicole has been that:

a: They made a promise and they should keep it – Ok, I guess I can see this. For Cliff, his game has been about morality and for them to break their final 4 word is not a good look on him. Cliff tried to pass it off as him protecting Nicole more than himself but that wasn’t very convincing. Basically, Cliff’s argument is that he can probably get to the final 3 with Jackson and Holly but he is working with Nicole and Nicole (for obvious reasons) wouldn’t like that. He doesn’t want to leave her hanging so he is going to vote with her regardless of how she votes to prevent a tie. To me, it sounded like he was just passing blame to Nicole rather than owning up to the flip but maybe Holly didn’t see that

b: Holly is a weak player and easier to beat – One of the competitions that Holly actually did win was the vine endurance comp. Her argument is that there likely won’t be any more comps like that so clearly she can’t win anything else. What? That’s what she’s going with? First, winning an endurance comp is hard. Don’t act like it was a pure lock comp like some of the others. Second, you came in second to Jackson during the other endurance comp (slip and slide). Third, round 1 of the final HoH will likely be an endurance comp so you most certainly will have a comp suited to you moving forward.  That argument is complete bull and anyone can see through that. Holly knows she is a fairly strong competitor.

c: She is happy to make final 4 – This is yet another pitch that she made. Evict her 4th rather than 5th. It’s absolutely a nightmare scenario that she be sent home in 5th place but is perfectly happy with finishing 4th. Bullllllshit. I get that she doesn’t want to be evicted on Jackson’s HoH but that’s the way the game goes. Jackson had zero control over it because there are only 5 people. People aren’t going to look at her and think ‘oh man, Jackson really played her’. He didn’t. It was a numbers game where Jackson was 100% powerless once he lost the veto comp. If anyone falls for that mumbo jumbo, they deserve to lose.

Look, I’ve said all along that Holly is a more guaranteed win if you’re sitting next to her in the final 2 and keeping her is not as crazy as it appears, but I also know that Jackson is always a huge favorite to win any veto comp and if he wins, there is 100% chance two of the final spots are immediately full so long as Holly is in the house. There is no room for a Holly, Jackson, Cliff, and Nicole final 3. Cliff is trying his hardest to get Nicole to the final 3 with him and the best odds are with Tommy in the house. There is a strong chance that Jackson takes Cliff/Nicole to the final 3 if Holly is gone. There is no chance if she is there. Yes, Tommy is a huge favorite to win it all if he’s in the final 2 but that won’t matter to Cliff or Nicole if Jackson and Holly are sitting in those seats.

As Cliff just pointed out to Nicole, if they evict Tommy, he is virtually guaranteed #3. Possibly better, likely not. If they evict Holly, he can finish 4th, but he can also make the final 2 that path via a few scenarios.

I’ve debated on that back and forth all week but what Cliff said succinctly sums up the entire argument and makes me think getting rid of Holly is 100% the right move for him and Nicole here. It’ll suck if either are sitting next to Tommy in the final 2 but it’ll suck worse if Nicole and Cliff are voted out 4th and 3rd. They have 0 chance to win if they’re not in the final 2. Obviously Cliff would prefer to be there, but I genuinely believe that he’d be nearly as happy if Nicole were to make it and even win if he couldn’t. Both are really good people and in a season full of shit, it’s nice that the two nicest people in the house ended up rising to the top.

Unless something changes between now and tomorrow, Holly is out of the house in less than 24h. Updates below if any happen