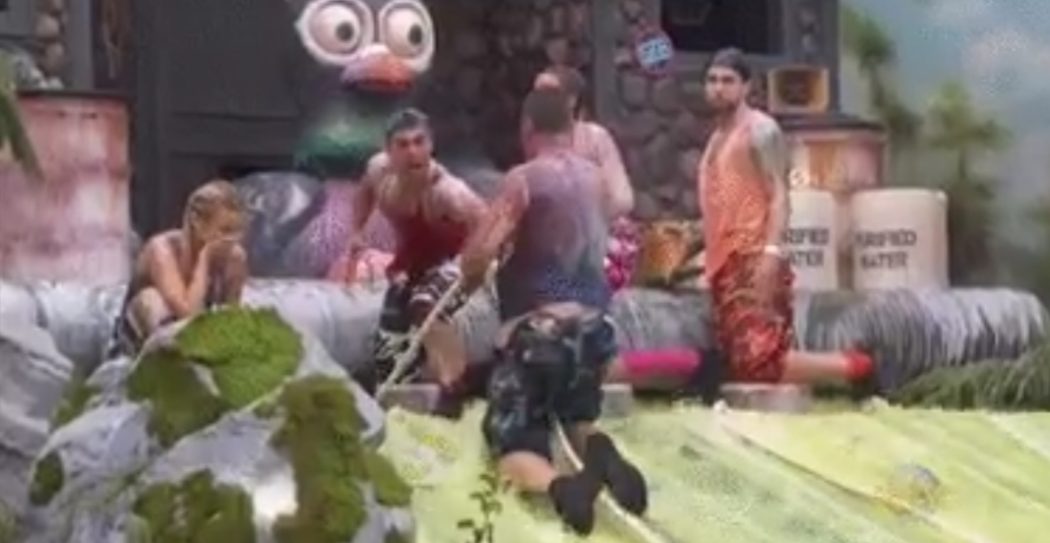 Good morning y’all!  I woke up early and realized I’d missed some late night activity in the BB house. Steve posted an early morning thread as he was beginning to sort it out himself.  There were conversations with many people throughout the night and there’s no way I could possibly go over all this in such a short time frame.  I think I’ve pieced together a summary of what’s going on and I’m guessing, depending on his schedule for today, Steve may be able to go back and give us more of the necessary details.

Here’s what I do have:

Both Cliff and Kat did their campaigning yesterday and when Kat campaigned to Nicole, it appeared to be working.  Nicole told Jess that Kat told Nicole the entire story with Jackson and how things happened with the two of them. She said shw believed Kat really did want to put Jackson on the block if she were to win hoh. Nicole wants Kat to have her “vindication” as she put it. She’s also convinced that Kat will go hard for the HOH and feels she and Jess would be completely safe with a Kat win. She said everyone is worried about Kats relationship with Jackson and Holly but no one is talking about Cliffs relationship with Jackson. Nicole is also concerned about Nick and said she wants to trust him but wonders if he is “blowing smoke up her ass.” (She said this to Cliff in another convo) I’m guessing Nick comes into play a little bit because Nick is involved with the new alliance/not an alliance with Cliff, Tommy and group. Cliff is also injured and even though Nicole doesn’t see what’s going on with everything, she’s smart enough to know her side needs to win the HOH.  (I’m just trying to paint the picture of where I think Nicole was coming from with some of this) I know Nicole spent a very long time in the DR last night. If you remember, she’d already told Cliff, Nick and I think Jess, she was voting for Cliff to stay. After coming out of the DR, Nicole told Jess how torn she was and said she did a lot of crying and talked a lot of things out with the DR. Now, I don’t know if she was just talking or if they were influencing because I’d imagine, production really wants Kat to stay. On the other hand, Kat really got to Nicole when she campaigned to her.

Jess and Nicole began talking about the possibilities of saving Kat they knew they’d need to talk to Beth and Jackson. That would give them the votes they needed. Nicole told Jess about the new proposed deal with Tommy, Sis and Christie that included Cliff, Nick and Nicole. Jess was pissed she wasn’t included.  Most everything goes over Jess’ head but she quickly realized the only 3 people left were Beth, Jackson and herself.

Here’s where things get a little confusing. Jess spoke with Sis and pretty much blew up Beths game. She told Sis, she knew about the new 6 person alliance. Jess said Beth was mad over Sis and Christie making fun of Cliff during a comp and said Beth was upset because Sis was flirting with Jackson last week. She told Sis that Nick never wanted Jack to stay and he was lying when he acted like he would vote to keep Jack if they could get Cliffs vote. She also campaigned for Kat. Sis said she trusted Kat but didn’t think the others would go for it. Sis said she wanted to keep Kat but she sad she didn’t know how far Kat could take her. Jess said “and you think Cliff is going to take you far? Wow!” Sis was mostly upset over being seen as a mean girl. She said she knows they’re on camera and she would never say anything mean about anyone. (I just choked on my coffee)  Later, Sis went off and said she’s never flirted with Jackson. She said if she wanted him, she could have him but she was with Jack. (For the record, she HAS flirted with Jackson and she’s  flirted with everyone except Cliff. In her defense, she didn’t flirt with him nearly to the degree that Jackson made it sound to Beth)  Sis also wanted to know who told her about a new 6 and Jess said she heard it. (as in overheard people talking) Sis said if she knew who said it, it could make her change her vote and keep Kat. ((I’m not sure when but it seems eventually, Jess gave up that Nicole told her) Sis said she was playing her own individual game and didn’t want Jess to think otherwise. Jess kept saying “ok.” Sis said she could tell Jess didn’t believe her and Jess said “I don’t even care anymore.”

Nick and Kat were busy calling each other out too. He still doesn’t believe she’d go after Jackson. She thinks he’s making a new alliance every week. He said he isn’t. She said she needed to call both Nick and Cliff out on their bullshit. Kat said Nick couldn’t depend on Cliff and told him about Cliffs Angel’s. Nick said he didn’t need to explain himself to her.

Tommy believed Kat about everything and was maybe changing his mind about who he wanted to keep. He may have also been doing damage control for Beth. He at least knows someone has loose lips. (hint: everyone)

Christie took a moral stand (again) and said she couldn’t handle all the people lying all the time. She wanted to go to bed and didn’t want any part of it. (Translation: Kats still going home so this stuff means nothing to me) When Christie was talking to Jess, she said the whole game was sickening and didn’t like the way you have to cut deals. This upset Jess and Jess told her “that’s what’s pissing me the f*ck off. You don’t have to do anything. You guys are talking as if you have to do this.” Christie just responded by telling Jess she didn’t trust Jackson and Beth. (Jess has snapped!)

Nick was mad at Nicole for not telling him about Cliffs Angel’s. He said he can’t protect her if he doesn’t know everything. She said she didn’t think it was a big deal. Later, Nicole told Kat about Nick being mad at her because of it. Kat said it was none of his f*cking business. (I’d like to point out the way Nick speaks to Nicole and Kat. He berates them and becomes aggressive with them in a way I’ve never seen the little weasel speak to any of the men)

Kat was also upset with Cliff. She told him she didn’t like that he made a deal that didn’t include Jess.  She talked as if she thought Cliff had been playing them and he told her he wasn’t. She said Cliff  only agreed to Cliffs  Angels because Jess was HOH and it was convenient for him. He reminded her they made Cliffs Angel’s  before Jess was HOH. He said he was still trying to protect Jess but he couldn’t do anything if he was gone.  She said “as soon as push comes to shove, you don’t have Jess’ back.”  He said “as soon as push comes to shove, with me on the block and going home.” Kat said “no Cliff, I’m going home.”  He said the deal he made could buy Jess 3 weeks. Kat said “I doubt you made a deal and in the fine print, it said, Jess is safe for 3 weeks.” Kat talked about how ride or die she is as a person and said she was disappointed in Cliff. Cliff tried to explain there was only so much he could do while sitting on the block with Kat. He told her how much he cared about her and they appeared to patch things up. He said he really wants to be a part of her life and he would be proud of his daughter if she played the way Kat’s played. (Cliff is telling the truth about Jess and earlier, he told Nicole, he thought one of them could win hoh during those 3 weeks and save Jess so she would be in the F6 too) They said whoever went to jury should tell Jack that Sis has already hooked up with Nick. (Haha)

Christie (of all people) was annoyed because she said Jess was hysterically crying downstairs. Beth said she bet she was because if Jess had a game, she just blew it up. Beth is mad at Jess and also told Kat they had Jess to thank for blowing up both their games.

That’s all I have pieced together from last night.  By the time it was over, I don’t really think anything changed.  This cast seems to be continuing on the way they have been since the beginning, which is, no one can keep a damn secret!  It doesn’t mean things couldn’t change today because when everyone gets up after a little sleep, people may start reflecting on some of the info revealed last night.

Some more evidence showing what a jerk Nick is:

He has taken over Tommy’s new phrase of “losing two votes.” Tommy was saying that about Jackson and Beth. Nick told Nicole Kat just lost 2 votes referring to Jackson and Beth. He’s so annoying and I actually think I dislike him more than Jackson. (Ok, that doesn’t make him a jerk but I can’t stand when people do that)

Christie has called Nick out on his behavior with Tommy and mostly Sis. She asked if he thought Bella would have a problem with his behavior. He said “probably.”  He also said he wasn’t going to be with someone who didn’t trust him so he was basically saying Bella will just have to get over it. Later, he said he cheated on his ex girlfriend with all of her friends.

Christie still thinks Kemi stole her laundry bag and that was discussed AGAIN. You know, the laundry bag that come with being the hoh, the one production took back, after Christie was no longer the hoh!!

Sorry for the lack of images today but here’s one I’ve holding back for the right moment. This isn’t that moment but Christie’s such a sweet girl, I don’t want to deprive people any longer: 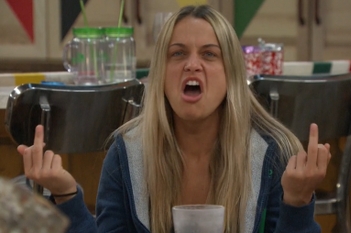 Strange recap today but it was a strange night. Most of this won’t matter tomorrow since it’s Thursday but some of it could carry over. We’ll  have to wait and see. I’d check in with Steve today just in case anything happens. Have a great Thursday.