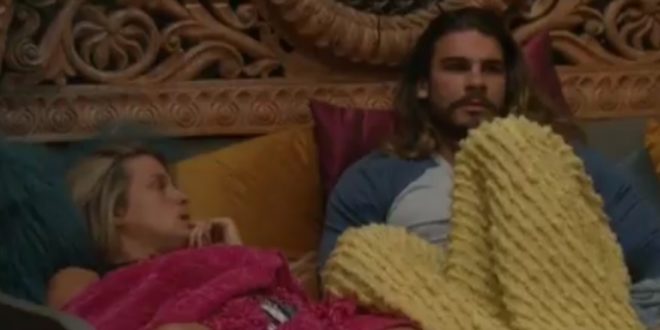 Good morning, sorry I missed yesterday. I had work issues and missed the chance to talk about Cliff because I’m sure everyone’s already moved on by now. I’ll just say, I love camera talkers but they gotta know when and where to do it! I mean, come on Cliff, you’re a feed watcher and apparently a loud talker.  He already had an uphill battle and now he’s being talked about as a target. Christie didn’t use the stuff she overheard to her advantage at all. Bella and Christie are terrible allies because they can’t keep their mouths shut.

Speaking of Bella, I laughed when she outed Gr8ful to Sam.  He really thought he had a great position in the house and he uses the term “bottom feeders” often so it was funny to watch the moment he realized he’s a bottom feeder. This is when Bella was giving him the details and it’s all over his face how much he screwed up this week by not using the veto: 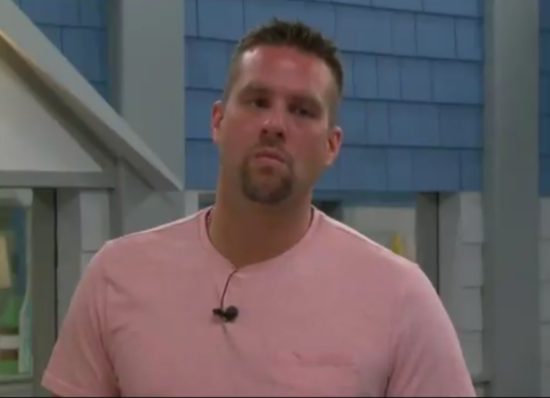 If only Bella had told him a little sooner!  This week’s game play has been so dumb by so many people. I’m not complaining since there’s actual game play happening and it’s better than the other stuff we’ve been watching lately. It’s frustrating and funny at the same time. Bella is so focused on feeling important when she shares info, she doesn’t take into account WHAT she’s sharing or how her “news” could factor into the other person’s game. The same thing happened when she told Nicole about spilling the girls alliance to Jack. I doubt it crossed her mind that Sam might trust Nick less since Nick didn’t tell him and Nick is her #1 person. (Actually, who knows? He’ll probably end up under her bus too.) Nick isn’t much better and he throws things out all the time which make zero sense and are bad for his game. It would be different if Nick was really loyal to Jack but he isn’t. He wants to target Jack but will evict Kemi because it’s good for Jack’s game.  Nick is also making the mistake of thinking he has Christie more than Jack does and that’s soooooo not true. I’ve also noticed how Nick and Bella don’t even coordinate what they’re doing with each other. Bella’s told Kemi about Gr8ful now too.

Sam finally realized his best move was to keep Kemi. (If only someone had a veto…) He put in some good work trying to flip the vote yesterday and I thought it might happen a couple of times. Finding out he’s #9 in the group of 8 had him wanting to make a move but being #9 makes it harder to make one. He simply can’t get the votes. It was funny when he talked to Jack about it and Jack pretended to be neutral. Jack slipped up and said he just wanted to do what was best for Gr8ful. He tried to fix it and changed it to “what’s best for the 9” but there’s no way Sam missed it. (He confirmed later to Nicole hed caught it) Jack was on a roll with Sam. Later, they were talking about Nicole and Jack said “she’s a floater like you.” These people make Foutte look like gamers. 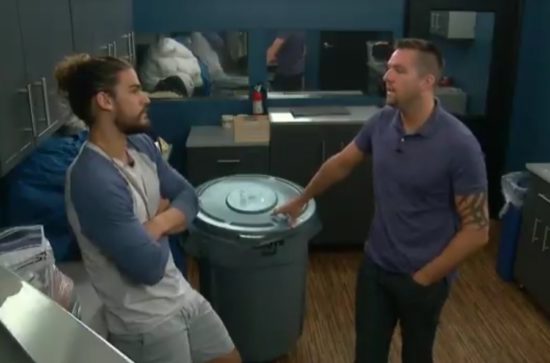 Sis may have realized she’s only going to be known for being Jack’s booty call and is trying to step things up. Here’s the problem, she has no idea what’s going on but she goes off with these angry rants anyway. It’s so bizarre.  People could be talking about someone targeting Jackson, for example, and she’ll go off cussing like a sailor about how she’s pissed because so and so is making her a target. She looks like someone who read a how to book on BB, read a a chapter about angry phrases to use in certain situations and she got the phrases mixed up with the appropriate moments. NO ONE is talking about targeting Sis but I think production gave her a script that no one else knows about. Nick did suggest to Nicole she put up Holly and Sis if she were to win hoh and that’s made the rounds but Nick was just trying to get Nicole to give up names. It wasn’t that big of a deal and Sis knows the details of what happened.

This was from the night before when a few of them had a PB&J party. David was singing and got pretty loud, hoping to wake people up I think.  This isn’t remotely relevant, I just like these two very much. Ovi was also there and I think Kemi was too but it’s been a couple days so I could just be making stuff up: 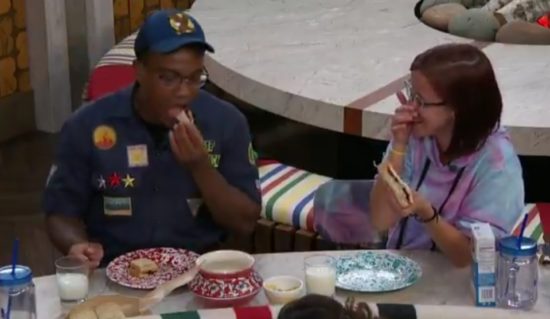 Kat & Holly keep having quick secret meetings together. She’s back in fully with the Holly & Jackson duo but she’s still entertaining for now so I’ll give her a pass on her choice of allies. She really likes Jess and doesn’t have a reason to get with the ‘save Kemi’ crew. Holly and Jackson have both mentioned how it might be a good idea for Kat to trash them a little so people don’t think they’re working together. Holly told them “Oh, I’m already doing that.” She says things like this ALL the time and she’s entertaining on the feeds. Speaking of Kat, I thought the show edit was complete BS on Sunday.  They made Kat out to be a stalker since they didn’t let the viewers know there was a reason Kat thought they were becoming a couple. Do they spill she slept with Jackson a few times before the feeds were on or make her a stalker? How about door #3. Show Jackson making moves on her and leading her to believe they were a thing. They don’t have to give the TV audience the dirty details in order to be more accurate. The show edit hasn’t been that bad so far but it could be better. They’re getting the overall storyline of the house but they missed the mark by making Kat a stalker and not showing the jackoffs being jackoffs.

Jackson told Sis he couldn’t believe he’d had sex with Kat and said he regretted it. He said it as soon as she left the room and it was a jerk thing to say and talk to someone else about. Sis said it was good that at least it wasn’t on the feeds, like hers was. Jackson agreed and seemed so proud of himself because no one would know about it. (Hey jackass, you’re on the feeds talking about it….again!) Does everyone notice how Jackson has a phrase he runs into he dirt? For a while, it was “I’m not going to let him get under my skin.” How many times did we hear that about David? Now, it’s “I’m planting a seed to see what comes out the other side.” He’s done this while giving information to Kemi more than once and there’s no point to it since they’re evicting her. Even Jack asked him once what was the point? I also don’t know what the hell he’s planting that grows sideways.  I garden and the things I plant come up, not the other side. The other side of what? The dirt? The garden? The other side of the BB house? Whatever it is, it will be waiting for him in the parking lot on the other side of the BB house I suppose. 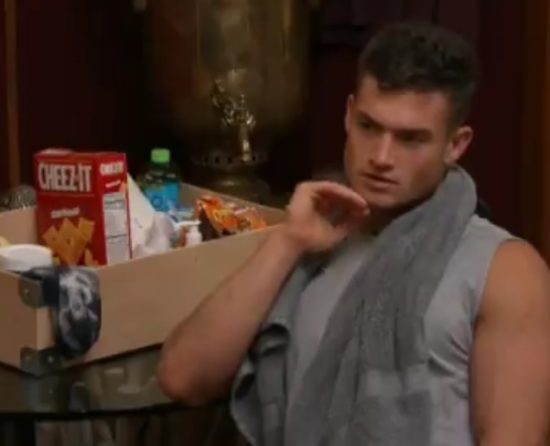 Nicole did a lot of  work trying to keep Kemi. She talked to Sis, Holly and Christie and explained the entire Bella mess and how Bella started the girls alliance and set Kemi and Jess up. (It really doesn’t matter) She had a good audience because they’ve been (especially Sis) mad a Nick all day and didn’t like Bella to begin with. Nicole is trying to sell them on how Kemi would go after Nick and Bella instead of Jack. Sis started her angry and worked up ranting again. She said she wanted to go off on Nick. (She’s said that about 20 times) She also said America probably wants her to start some drama. (If she wants to start something, she could start with keeping her pants on) Nicole suggested she not go off on Nick but told her to do what felt right. The biggest problem with this strategy from Nicole is Jess would also go after Nick and Bella plus they don’t really care for Kemi.  Christie likes her but knows Jack wants her out so that’s a dead end. Holly doesn’t like Kemi and is working with Kat. Kat is close to Jess. Sis can’t stand Kemi. Nicole isn’t aware enough to realize it’s not going to happen but I loved her for trying. Christie said later in the night she doesn’t trust Nicole anymore so my girl Nicole may be in trouble soon too. Why, oh why doesn’t the BB house have a basement she could lock them in like she did her parents?

Tommy was missing his hat and this added more to the idea of Cliff being America’s player. It’s why they hid the stuffed Orwell the other night. They saw Cliff with it a lot and thought it might be a task. Now, Tommy thinks maybe taking his hat was a task too. BB hasn’t done Americas player since season 10 (Dan) but every year they suspect someone. BB16 was Team America, not Americas Player….before ya’ll come for me with a correction on that one.

Jack told his crew how Kemi was “really into me at first” and said she was flirting with him. He knows she’s leaving but still found it appropriate to call her a bitch and dog shit. This was during the retell of his talk with Kemi. He’d asked Tommy to sit in so they were sharing Kemis pitch for Jack to keep her. She said something negative about his cooking the first week and wow, has he hung onto it. Here’s Tommy, who we don’t see often. It’s a good sign for his game that we forget about him: 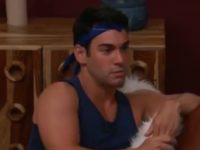 Last night, Tommy told Jack he could see Sam winning the game and he told Jack about his new alliance that Steve mentioned yesterday, the Flaming Five. Jack told Tommy not to worry about the thing with Sis. He assured Tommy that Christie was still his #1. He corrected himself and told Tommy, he was his #1 too. There are so many reasons why we may be stuck with Jack for a while. Along with him being a physical threat in comps, no one is going to go after him until camp comeback is over. The biggest reason may be Tommy. Tommy sees Jack as a good choce to go near the end with and Tommy is possibly playing the best game in the house so far.

The Jack group talked about doing a vote split tonight to see where Cliff votes and to give Jess some targets. There were mixed opinions and I dont think it will happen but you never know. I’m preparing myself for Kemi to be evicted and even tho it’s a bummer, it’s also BB.