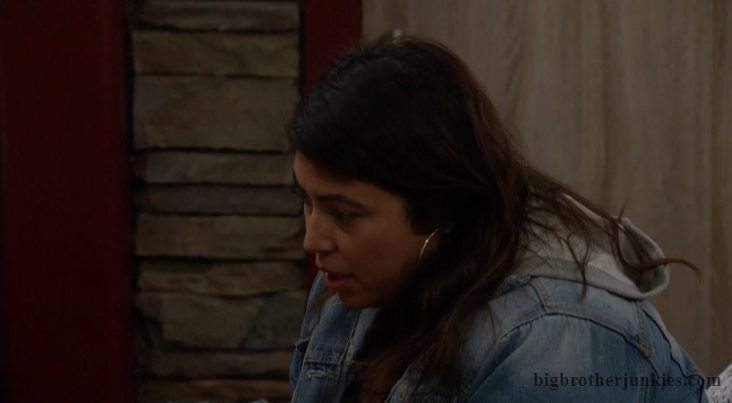 This post is not to replace Mel’s report on yesterday. I’m sure she’ll have one and it will be very thorough. Hopefully combing through stuff that I missed.

I went to sleep early last night and woke up early. I honestly thought this week was just going to end quietly, so I watched TV and fell asleep. Something told me to get up and check the feeds, and sure enough, I load up the feeds around 6 AM (est) and everyone is still up and talking. So, I had to scroll back a bit to see what happened and this is the best I have so far:

Nicole told Jess that there is a new alliance forming. Christie, Nick, Sis, Nicole, Cliff, and Tommy. Jess was not happy to find this out and sat down for hours talking to Sis about it. She was grilling her about trusting Cliff and how he has been making deals with everyone (he has), and Sis is upset because this all kind of sprung on her. She threatens to self-evict for like the 10th time this season blah blah

As the night continues, Jess continues to campaign for Kat to anyone who will listen but it’s not really working. In addition, Kat campaigned directly to Nicole who told her straight up that she’s voting for Cliff to stay (as of that moment. Could change, stay tuned…). After a bunch of campaigning in various parts of the house, it ends up in the HN room with Kat calling out Cliff for betraying Cliff’s Angels. He tries to defend himself but he really knows he has nothing.

I’m going to be bouncing back and forth trying to piece everything together as I live blog what is going on now….

3:45 AM – Chris, Sis, Tommy, and Holly are in the HN room talking about what has happened 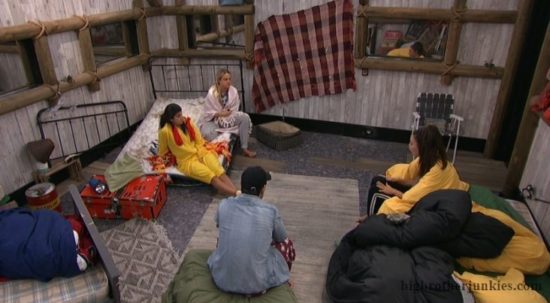 Tommy recounts how Kat confronted Cliff about the new alliance and Cliff played dumb. Christie says that was a lie and Cliff was probably confused what to say and was just humoring Kat for a jury vote but she’s pissed he still lied to her (Kat)

Christie says Jess is crying hysterically to Kat in the bathroom and Holly says ‘of course she is because she just blew up any game she had left tonight’.  Holly says that Jess pulled her aside and told her that she (Holly) is the #1 target right now by the new 6 person alliance. Christie laughs at the thought of that alliance (which is true). Holly says that Tommy, Sis, and Christie joined Cliff, Nicole, and Nick and was going to target Holly and they needed to keep Kat for the numbers. Christie laughs more (even though Holly is correct) and Tommy denies it.

Christie says Jess is just freaking out because Kat is leaving.

Sis recounts her conversation with Jess how Jess spilled the alliance to her. Holly repeats what she heard from Jess and Jackson backs her up. Holly is going to feel so stupid when she finds out Jess was right.

Jackson mentioned how Christie was making fun of Cliff and Christie starts getting pissed. She says “that’s a thing now? Making fun of Cliff?”. This goes back to the story Nicole told during one veto when Cliff was struggling to run to collect something and Christie and Sis (I believe) were snickering at the way he was running. At least that’s what Nicole thought they were doing.

Sis explains that they were cute laughing at Cliff chasing the things in a “look at Cliff he’s living his dream right now playing this game” and not in a make fun of type of way. Honestly, I actually believe that. As bitchy as Christie and Sis are, I just never really believed they were maliciously making fun of the way Cliff was running. I had a feeling it was probably something else.  But, I didn’t see how they were laughing so my opinion isn’t valid.  I just never got the impression of ‘make fun of old dude’ vibe from those two. Many other bitchy things – yes. Make fun of old dude – no.

That conversation finally breaks up 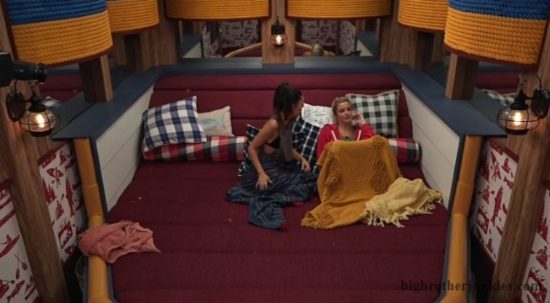 Holly says Jess threw her under the bus to Sis like how Holly was insecure about something Sis had with Jackson.

Jackson comes in and says Sis made it very clear she’s voting to keep Cliff. Kat says she can’t wait to get out of that house

Kat says all these people are losers

Jackson tells Kat about the eviction speech he was going to use. It was along the lines of Jack and Christie dated in the past and called it off when they went into the show. Would have been a great lie because Jackson was very convincing but Queen Christie has her real-life friend Tommy to defend that to the end.

Things have calmed down. I’ll have a thread open tomorrow afternoon to see if anything interesting happens. For now, back to bed.