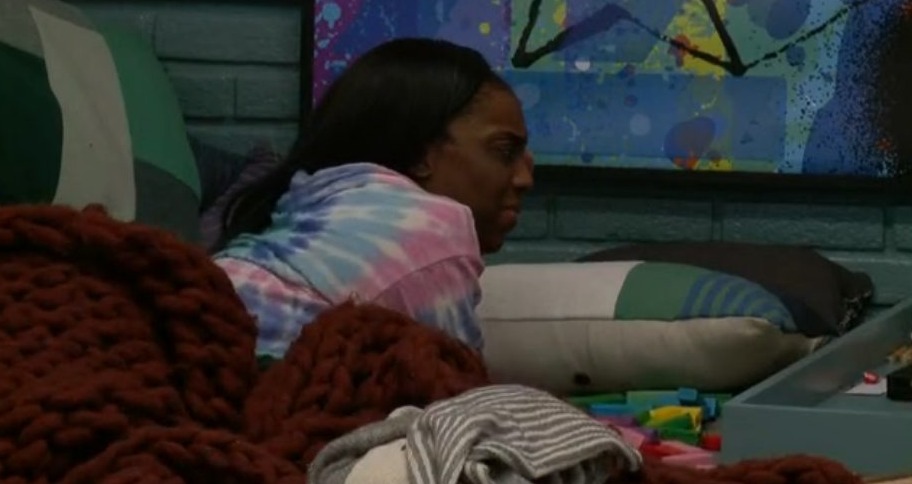 I know people have been sitting around patiently waiting for some drama, but don’t worry. I took a look into my Big Brother crystal ball and I see a big blowup happening over the next week. I mean how can there not be one?  I’ll be shocked!

Let’s summarize – Janelle and Kaysar are feeling real bad that NicoleA (Ant) is on the block. They have made it no secret they would like her to stay. Meanwhile, because Janelle’s bad blood with people like NicoleF, her support to Ant makes it more likely she’ll be voted out this week. Ant knows this so she has been trying to distance herself from Janelle and has basically been spilling everything Janelle has told her.  Yikes on bikes right there.

Meanwhile, Da’Vonne has been wrestling with her own issues of heart versus brain when it comes to keeping Ant. Day has made it no secret to anyone that she is rooting for David to go far in the game because there has never been an African American male to make it deep into the game. Ant respected that but asked if she honestly believed David would do the same for her. This caught Da’Vonne off guard I think because she found herself repeating the question to Bayleigh later on and both agree the same – probably not.

So, Da’Vonne has a tough decision to make because the reality is, keeping Ant may be her better option. The overall vibe of the house is that NicoleF (Franny) is forming quite a thing with Cody, Dani, Ian, Tyler, Christmas, with Memphis and Enzo floating on the outside of that. If that is indeed the case, the current house breakdown looks like this:

If Side 3 actually fully merges with side 1, that’s a majority and can win any vote. However, if Side 4 merges with 2, that’s 6 people. All it would take is one of them to win HoH this Thursday and the house will basically be split down the middle.

No matter what happens, the numbers are not looking good for Da’Vonne, but should she keep Ant and they all merge with 2, anything can happen.  If David stays, he’ll continue to float or even gravitate toward Side 1 because he’s grateful they kept him and that just puts them all as lambs to the slaughter.

I haven’t really broken down the game yet until now because it’s been a clusterfuck, but now that it’s becoming clearer by the day, Da’Vonne needs to recognize that should she go back to side 1, she is very, very low on that totem pole.

Alright, too much rambling!