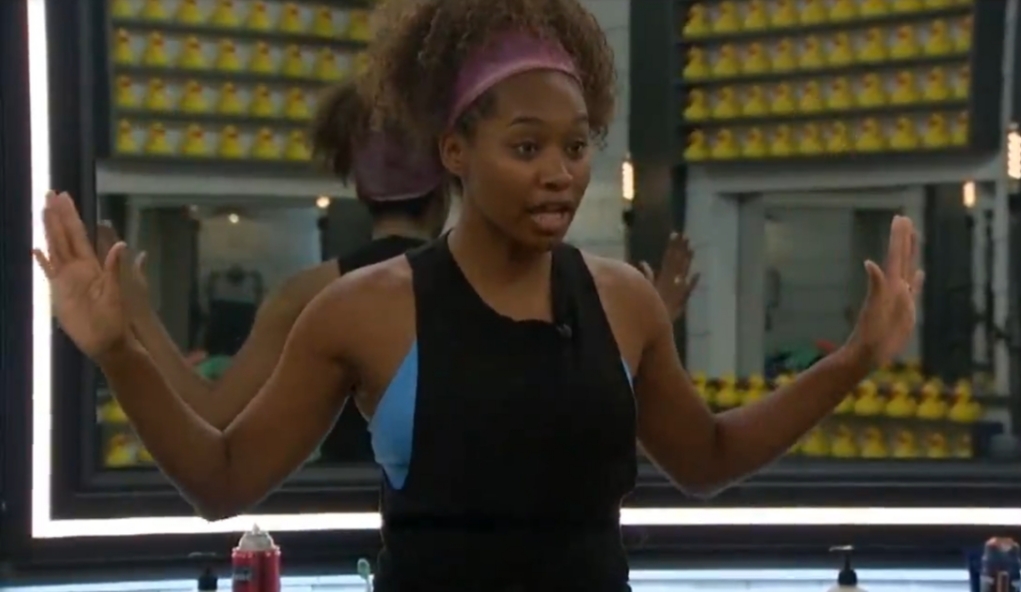 Good morning! I was away for the weekend and now I’m trying to jump back into the mess that is BB22. I guess we can agree things have finally picked up a little bit. Steve did so much blogging yesterday, there really isn’t a need to go over every detail again. (Yeah! Props to Steve! It totally saved my ass today too!)  If you’ve missed a couple days of feeds, I’d recommend reading the last few threads to get caught up. (it’s good!) Before I get started on this recap that’s not really recap today, I saw this on Twitter and it cracked me up. The person Tweeting is referring to Christmas.  It appears some people arn’t up to speed and don’t realize (thanks to Gerardo and his brilliance) and the people who comment at BBJ, some of you have already been doing this:

Even before things went off the rails last night, there was already a weird vibe in the house. Maybe because this cast is older and many of them have kids they’re missing or because they’re more aware of the way social media can go after them, it’s made some of them less happy to be there. We still don’t know the details about Tyler wanting to leave and we haven’t confirmed Ian tried to self evict.  However, they’ve both said enough stuff about it to make me pretty confident that it’s true. Tyler did tell Day and Bay, he would do everything short of self evicting to be the one who left.

Whatever happened, in the end, Tyler changed his mind. Some people feel like he took the game to a bad place when he told Bay and Day he wanted to fall on his sword for them because he knew they were trying to accomplish something bigger. Some feel as if Tyler meant it and simply changed his mind. Others think he was setting Bay and Day up from the start, get their hopes up, only to intentionally crush them. (I for one, don’t see this at all) I think it’s more likely that Tyler was miserable, wanted to leave but didn’t want to be a quitter.  He saw a chance to be voted out, leave “the right way” and simultaneously try to help Bay and Day because he felt guilty.

I’m not going to try to get into Tyler’s head but instead, look at it more from a game perspective. Several things come into play in this situation:

The last point I want to make about Tyler’s (almost) plan to leave is that I think it’s bullshit. I like Tyler and the way he plays the game (BB22 and BB20) but I’m not going to be a hypocrite. I thinks it’s bullshit when people want to use the game week to go home instead of self evicting. I came down hard during BB Canada 8 when someone did it and I won’t be any different now, just because I like Tyler. He’s a gamer and knows he’ll be seen as a quitter if he simply leaves. (Not to mention that 40k Steve talked about) Tyler needs to realize he’s still a quitter if he were to ask the house to vote him out.  It’s actually worse because you’re still quitting, you’re screwing the hoh that week AND you’re putting the entire game on hold so you can leave. (Granted, this is more productions fault because they don’t want it out there that people want to quit. It’s not a good look)  It isn’t that I can’t sympathize when people are home sick, depressed because their games blew up or are having emotional distress from the game. I can understand all that but the players have to understand that winning 500k  may be a little bit harder than winning a few comps and attending taco night in the BB house.

The mood in the house mixed with a Christmas hoh had all the ingredients for things to get heated. I’d guessed a while back that Christmas would be the one to go there first, I just thought it would be with Janelle. You could also see it in the way Christmas tried to be the victim after she made her nominations. Bay and Day let her get away with it at first because the veto hadn’t even been played. Of all the things that was said last night, I was happiest about Bay telling Christmas she didn’t get to be the victim in all of this.

This isn’t related to last night but its something I noticed. (Steve may have already covered it) We know Tyler has been Christmas’#1 but she also feels close to Nicole. When they were sharing info the other night, Christmas was talking about how close she’d been getting with Nicole. She said something about Nicole being closer to her than anyone else. Tyler tried to argue with her and said “I think Dani is her #1.” Christmas said “no, it’s me.” At first, I thought this was a good way for Tyler and Christmas to keep getting info, even with Christmas being wrong,  but then something else happened.

The night Christmas told Tyler the women had made and alliance and said they’d all compared notes on Tyler, she left something out. Tyler asked her if they were trying to get him put up to be backdoored, she told him no. (She did a poor job of lying to him and he didn’t beleive her) She also tried to put most of the Tyler bashing onto Bay and Dani. This was because Day was the one she wanted to stay this week and she was protecting Nicole. It’s made me wonder which F2 Christmas really wants, the one with Nicole or Tyler. It’s just one of those things I like to say ‘keep an eye on this.’  Christmas spills everything else so easily to him so I was just surprised when she held back when it came to Nicole.

You guys already know everything that happened during the argument between Christmas, Bay and Day so I’ll just add another observation. Christmas doesn’t make alot of sense and sounds like she’s contradicting herself when it comes to her noms. I don’t think it’s because she knows why and just can’t articulate it.  When someone gets manipulated into doing something, instead of doing it for their own reasons, it makes it harder for them to later explain why they did it.  That’s what happened with Christmas this week but she doesn’t see it.  Nicole spent a couple of weeks working on her, trying to get her against Bay and Day. (mostly Bay)  Like her or not, you have to be impressed with Nicole’s work.

The reason Christmas is saying Bay and Day got put up was because Bay admitted Day was her “untouchable.” It sounds lame because it is lame.  The real reason they’re on the block is because Nicole manipulated Christmas into doing it. When Nicole first started telling Christmas they needed to get out Bay, Christmas argued with her. Christmas would say she had a good relationship with Bay, Bay gave her game info (true) and she was more worried about Day. After a few days of Nicole working on her, Christmas started saying Bay had to go.

I’ve seen Tyler try to subtly talk Christmas out of thinking she had to worry about Bay and Day (several times) but it didn’t work. (Nicole won that round) This is why Christmas is grasping for reasons this week for the move. It isn’t her move, it’s Nicoles move.

After Christmas’ hoh win, Tyler had obviously stopped trying to get her to shift targets but we still don’t know everything. The feeds were down so we don’t know if he decided it wasn’t worth pushing Christmas or if he genuinely thought it was better for Bay to leave. The parts we hear from Bay and Tyler are also from their own perspectives so that isn’t completely reliable either. Everyone is always the hero of their own story.

Bay and Day may feel it’s still a toss up over who will leave after last night but I think it will be Bay. I know Enzo would prefer she be the one to stay but I don’t think many other people agree. Even some of the guys who originally agreed with him may be switching over to what Dani and Nicole want.  This isn’t decided by any means and we shouldn’t discount DaVonne’s ability to blow up her own game.