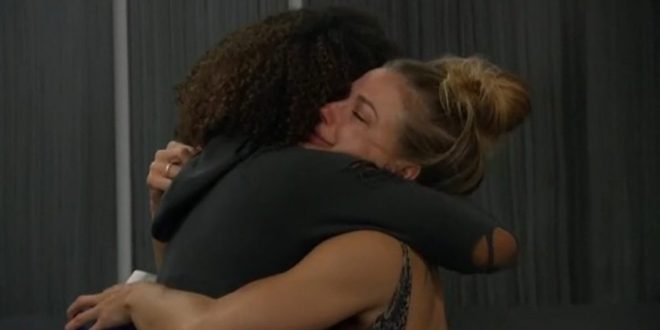 Alright, where do I begin with this?  Christmas spent her Big Brother 19 season as an absolutely useless waste of a spot.  Once she got injured and had to have surgery, she should have been out of the game. No ifs, ands, or buts about it. Voting from the hospital on phone was by far the low point of that season and quite possibly of the show’s history. It didn’t help matters that she was one of Paul’s ‘muscle’ in his gang of shitheads who made the season absolutely miserable for anyone they targeted. Despite doing nothing and floating to the end, she did finally recover a bit from her injury enough to win a few HoH’s and decided the crew she wanted to roll with was Paul and Josh. She made those dumb choices and Josh didn’t even pick her for the final 2.

Why is this relevant?  Earlier today, Da’Vonne pulled aside Dani and Nicole and had a heart to heart. She also revealed that Tyler had been one of the people who had been doing a lot of talking.  Likely pissed at hearing this, Dani quickly revealed that Tyler also said that he’d happily backdoor Bayleigh because he made a pact not to evict her. Da’Vonne chose to keep this information from Bayleigh for now because Bay really believed that Tyler was actually trying to mend their relationship from what happened during BB20. Day said Bay would be crushed to hear this, especially after the events over the last 24 hours. Either way, it was becoming clear that Tyler was trying to pick off the girls and all three talking (Bay, Dani, Nicole) agreed.

They also agreed that Tyler should probably be the target this week because losing yet another girl in the house would be painful for that side, and they agreed to have a secret pact. Maybe even still pretend to be pissed at each other (how long it will last, I have no clue). Anyway, both Dani and Nicole took that information to Christmas and let her know that Tyler has been indeed playing a bit shady this season, but she apparently already had her mind made up to be a puppet for another strong guy (Cody) and do his bidding. Just like she did on BB19.

Now, there is a chance that Christmas can actually backdoor Tyler this week. Especially with a weekend of planning. However, after nominating Bayleigh and Da’Vonne together, it’ll be hard to get Tyler out should they try the backdoor route. Doing a quick early count, let’s say Tyler was sitting there against Bayleigh, it would require an absolutely complete flip by Nicole and Dani against Tyler to secure his exit. Long story short, it’s not happening. Once again, Christmas has bonded with the strong guys in the house and just pretended to work with the girls. She’ll do their bidding and then likely be discarded when they have no more use for her. That’s just a guess based on history repeating itself.

Alright, time for some feed updates

With that, I’m going to bed. Don’t expect many updates in the afternoon. Likely be pretty slow until after veto