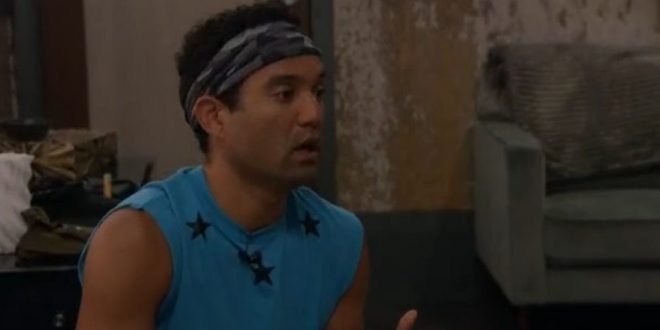 I’m starting a new thread because it’s Friday night, I just had a coffee, and I am full of energy! Plus I want to briefly recap Kevin getting a little angry today which was pleasant to see. It’s nice to see a fiery side finally come out.  In a season with virtually no drama (on the feeds), I’ll take whatever I can get at this point.

Kevin finally made his way up to the HoH room to talk to Cody and get a feel for the day. He immediately began by asking what he could do to avoid being on the block, but Cody really couldn’t give him much of anything. That’s because Kevin was his pick and he didn’t want to give him false hope. He did have a plan to ask Kevin if he won would he (K) have nominated him (C), but that plan really went nowhere. I’m not sure what he was expecting with that? Kevin to say yes? Naturally, Kevin said no as he would have even if he didn’t mean it. That was the extent of Cody’s plan and the rest was just to let Kevin vent.

The conversation went back and forth a bit before finally escalating after Cody basically revealed he was going to nominate Kevin. Being upset about knowing he’s going on the block for the 5th time this season, Kevin began getting a bit snappy with his replies back to Cody. He then used really his only weapon which was his jury vote.  He did not directly say he wouldn’t vote for Cody to win, but basically reminded him about proper jury management to which Cody was surprised because he felt he was actually being respectful. Cody asked if Kevin would vote for someone else over him even though Cody was being upfront and honest about the week, and Kevin would neither confirm nor deny that.

Cody continued on rambling and then Kevin finally said ‘the world doesn’t revolve around you’ or something to that nature. Cody got visibly upset over this and just told him that Kevin is indeed going on the block.

Now, this was a tense conversation, but I don’t really think either was in the wrong. Both were upset and both broke up the conversation before it got out of control.  It was just nice to see an actual pulse come from two people who have been mostly statues throughout the season.

With that, I guess I’m off to bed too.