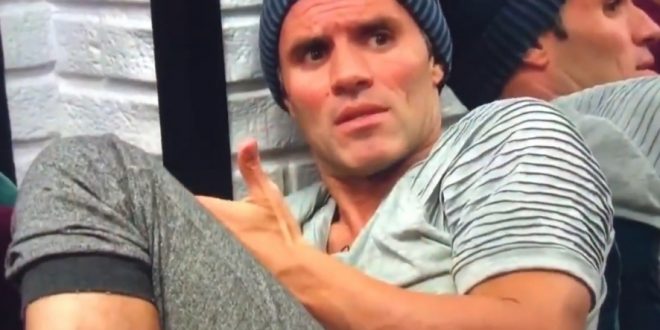 Good morning BB Junkies. There was lots of game talk and a messy veto comp yesterday. Enzo has a little hohitis but not the regular kind. He isn’t acting like he’s a king or getting super arrogant. He’s just more possessive over it. He says things like”this is my hoh, yo. You want somebody out, you win it and do it yourself, yo.” He was already losing trust in DaVonne and Dani but when they pushed too hard for their own agendas with noms, it finished him off. He’s ready to cut them both loose but don’t get excited. Unless something big happens, he means soon, not this week. Enzo never won an hoh on his previous season so he’s super proud of it. If you combine that with the way the Brigade operated in bb12, it’s no surprise he wants everyone to back off and just let him do what he wants to do this week.

To summarize whats happening so far with several people, it’s apparently Kaysar and Janelle’s fault that Bay, Day, Kevin and even David arn’t in a good position in the game. It’s their fault that DaVonne spent days seeing if NicA could get the votes to stay, lying to Dani about Tyler starting an alliance and showing her alliance she doesn’t trust them constantly. It’s their fault Bay wore Janelles clothes all over the house after she left, spilled too much info to the wrong people and thinks she can hold people to their word just because they promise. Of course, it’s their fault Kevin either,  never knows what’s going on or when he guesses right, never has power to do anything about it. They also forced him to tell Dani everything even tho he suspects her of working with Cody  and Tyler. It’s Kaysar and Janelles fault none of these people have won an hoh yet to hold the power. We’ve already heard they would’ve probably gone after Janelle and Kaysar even if they had won it….all while being worried that Dani, Nicole, Tyler and Cody are too close.