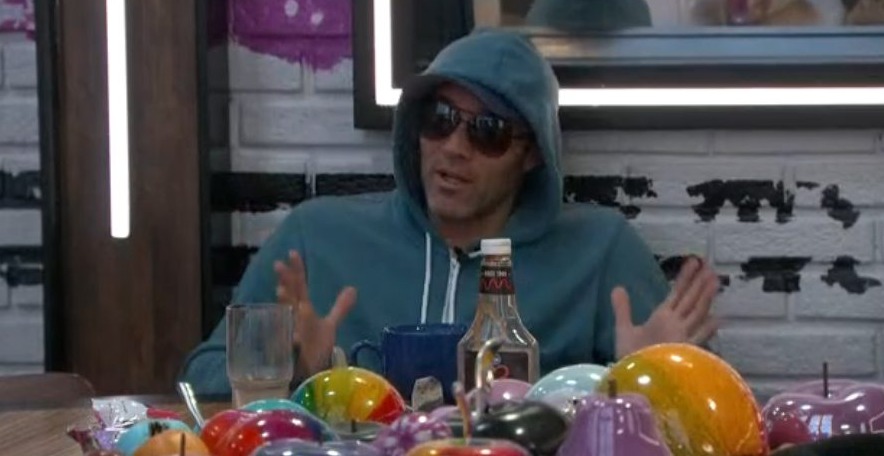 Before I begin the talk of Big Brother today, I want to address the question I’ve received a lot, and that is about Nickie (NKogNeeTow). She has updated me but I was waiting to get permission to post any details. I saw she made a comment about her status after I made my post yesterday so I am adding it to today’s post.  There is no easy way to say it, so I’ll just copy and paste her comment so it’s not buried in the comment section of a post:

I’m just doing a final check in for the year. I have cancer for the 2nd time in 5 months and this time it’s not nearly as nice. I’ve been trying to keep up with the board but I always seem to be running a week behind and half the time I don’t have the energy to even sit at the computer. 2020 has been a bitch and I can’t wait for next year to get here. I’m going to beat this thing again so don’t think you’ve gotten rid of me that easy. Lol. Hopefully this time next year, I’ll be back to normal, BB will be back to normal and I’ll have my beloved BBAD back.

I’d like to thank all who pitched in and filled in on the late nites. You guys are the greatest! I look forward to seeing you all again next year, and I mean that sincerely. Until then, take care, be well and remember I hold you all in the highest regards.

I just don’t know how to react to this news as Nickie, as well as so many others here, have become part of an extended family and to learn about this is devastating. That said, Nickie is extremely strong and I know she’s going to beat this. If you could say a prayer to whatever you believe in, I’m sure she would appreciate it. Her illness keeps her away from her computer, but I will keep trying to get updates for you guys. But we fully expect to see Nickie back next season. I wish I had better news to share, but I’m sure I will at some point soon.

Alright, no real way to transition this into Big Brother so I’ll just start rambling about the show and pretend all is right in the world.

A few days ago, I briefly touched on the human piece of trash that is Dani’s biological father and his words during an interview with Rachel and her sister Elissa.  If you want to see the clip, here it is (warning, racist language)

Dani’s father went on to do a fake apology tour which was apparently enough to win over Jodi from BB14.  That bothered Bayleigh, so the pair had an exchange on Twitter: 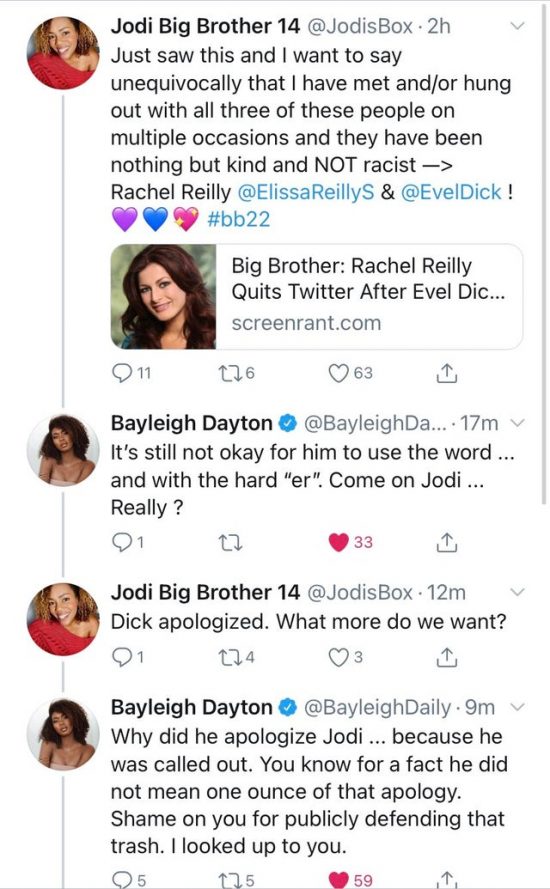 I want to touch on a few things here:

I really hate touching on race and I would have left it alone, but I wanted to mostly chime in to defend Rachel and Elissa here because Rachel even deleted her Twitter over it, and Bayleigh also deleted her Twitter as well.  We should all just have agreed what Dick said was shitty and shunned him from the Big Brother community. Now we have people deleting Twitter left and right and I don’t even know what’s going on.

The biggest news from inside the actual Big Brother 22 house is that Nicole peed herself while laughing yesterday.  It’s not really news, I just thought it was funny.

That’s enough rambling today, I may start a live update thread but I’m not going to update this post with updates. It’s already way too long. Have a good day!