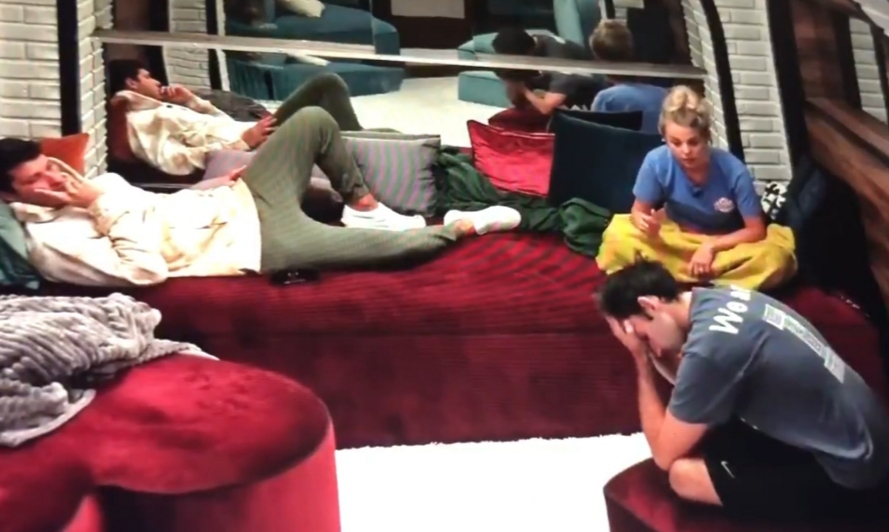 Good morning BB Junkies! I’m sorry this one is so late today. It’s been the best week of gaming so far and EVERYTHING is riding on tonights hoh. (I probably say that every week) Plently of people made game mistakes this week (Nicole, Dani) but which people have to pay for those mistakes will depend alot on the winner tonight. Day, David or Kevin will need it just for survival.

NK covered alot of the convos after the feeds came back on last night at the top of the comment section on the last thread. I’ll still go over the highlights but check her comments for more details in the conversations. Before recapping, I’ll give you my thoughts on Tyler and Ian.

Tyler- He’s otb but most of the house wants to keep him. Many think its nuts and it may be for most of them but Cody gets a pass on this. With Tyler gone, who is the biggest physical guy left? He needs Tyler there for a shield. I’d say the same about Memphis except he may be ok as long as he’s still milking his back injury. For the rest, sure it’s good to have the numbers but Tyler’s the best gamer left in the house, if his heads in the game. (in my opinion) Without having his head in the game, he’s still dangerous. If he’s otb, take him out. He may have gone otb but he’s in better shape than he was a week ago. It’s too bad he had that mess with Day and Bay last week because in order to take a shot at the Love Triangle, (Dani, Nicole and Cody) he’s going to need numbers he doesn’t have. Day doesn’t trust him and David doesn’t either at the moment. He’ll have to depend on the guys wanting him to stick around to give him time to work on relationships again….if he’s finally decided to play the game.

Ian- Anything can happen but I’d imagine he’s leaving tonight. I like Ian but let’s be honest, he’s played a terrible game. The only time he’s almost known what was going on was because of a wall yeller and Kaysar….both he chose to ignore.  I never gave him good odds to win this game and there were 2 reasons for it. One, his pregame strategy was to do what he did last time.  He wanted to lay low and then turn it up the 2nd half by winning comps. The problem, Ian hadn’t really followed BB in recent seasons. He may not have realized how physical the comps have gotten during the 2nd half of the game in recent years.  This made his plan a bad one. Two, Ian is an extremely intelligent guy but he wasn’t an incredible player in BB14.  I’m sure some disagree because he got out Mike Boogie.  He spent a large part of that season kind of like this one, which was getting played by other people and not knowing what was really going on. Like Britney said, (who was a juror in BB14 and who loves Ian) “the BB14 jury would’ve voted for a ketchup bottle to win over Dan because they were so mad at him.”

What actually happend: David told Day last week, he was campaigning for Bay but told her he was only testing Tyler to see if Tyler told Day about it. (It was stupid at the time)  David may have forgotten he told Day (have no idea?) but he genuinely believes Tyler set up Bay last week. Bay told David before she left that Tyler admitted to her he ruined her game. Bay wasn’t even trying to set Tyler up when she said this to David because she left the house believing it. I think Bay really thought that’s what Tyler was apologizing for when they talked the last day. It wasn’t.

The feeds were out this evening for the halfway party. They got the cake they usually get, the one that has everyones faces on it.  We knew they got it this year because Day walked by the table and realized someone had stuck a knife in Cody’s cake face. Day told this to Kevin and said she wondered who could have done it. (I obviously have no way of knowing but my money is on Kevin. He’s just that kind of petty) 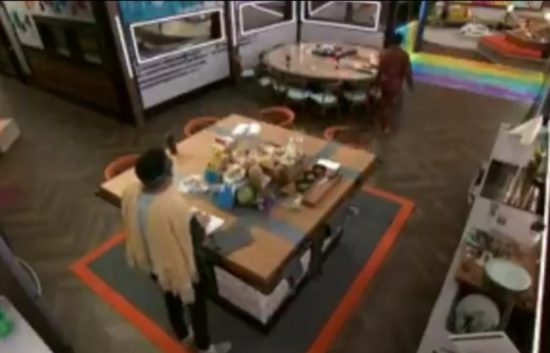 Have a great eviction Thursday!