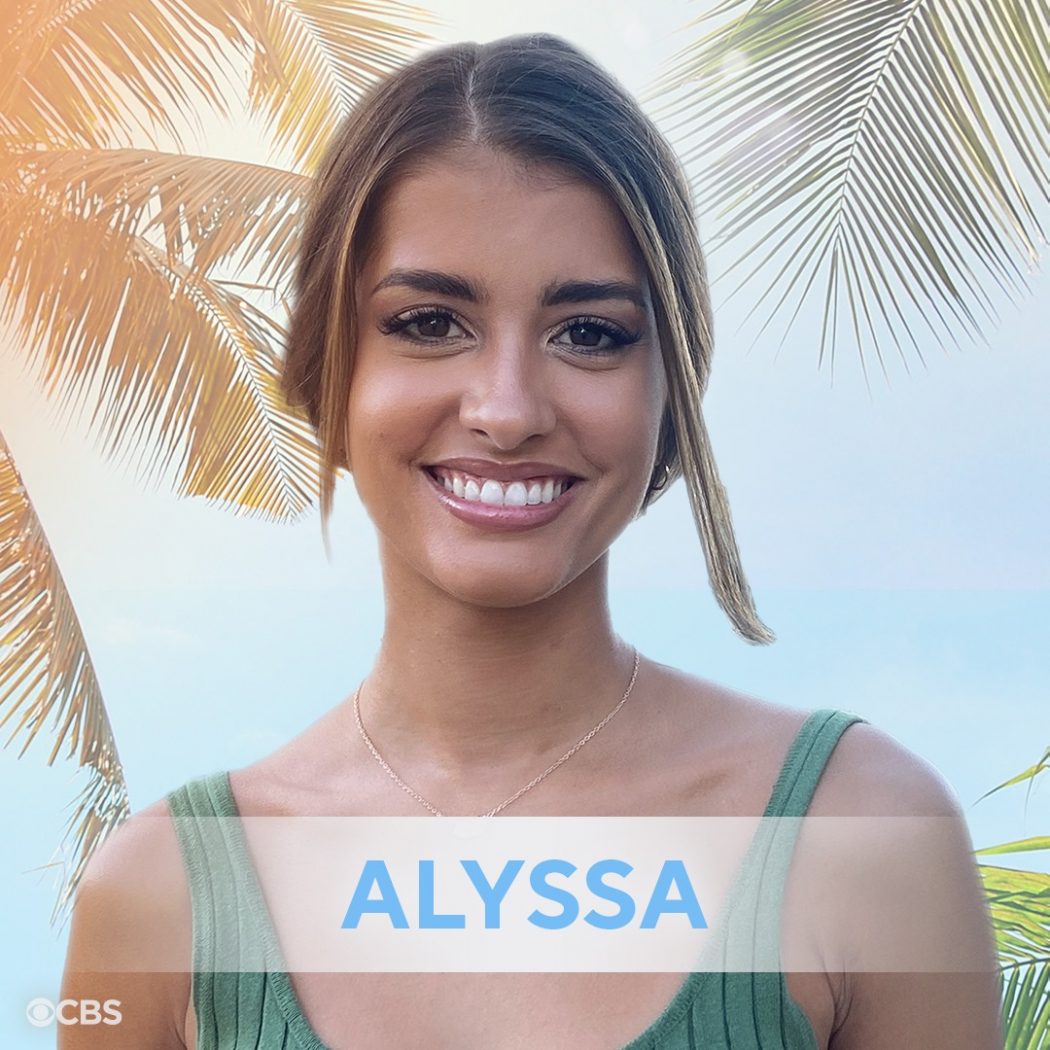 Alright, here we have Alyssa. A 24 year old Swimsuit Designer from Florida. She seems to be a pretty big fan of the show and also didn’t hit us with the dreaded ‘superfan’ term. That definitely earns her points in my book because if you’ve been around for a while, you’d know how much I hate that term. Especially when people declare themselves a superfan rather than someone else doing it. It’s like making up your own nickname, you just don’t do it.

Moving on, her favorite player is Jessica (BB19) which I can see. Jessica was definitely one of the better people of that season, and she didn’t follow along with the Paul cult. She easily could have become one of the ‘cool kids’ and cruised to the end but actually had a mind of her own which I hope Alyssa follows suit.

Of course, you can’t have a season of Big Brother without a model hanging around in a bikini all summer, but that’s all fine as long as the model knows the game which Alyssa clearly does. Her goal is to win the first HoH which likely means she’ll also be pushing hard for team captain. For this season, it could get her in trouble easy if she doesn’t follow through with her victory. We’ll see how she performs next Wednesday night!

Three words that describe you: Witty, sarcastic, and outgoing.

Favorite activities: Weightlifting, videography and video editing, boating with friends, going to the dog park with my dogs Jeter and Piper, and going to Siesta Key beach to watch the sunset.

Who are your favorite Houseguest duos? Those who became best friends in the Big Brother house or had a showmance?
My favorite Houseguest duo is 100 percent Jessica and Cody from Season 19. Jessica is my all-time favorite player on Big Brother because she played her own game, not Paul’s game like the rest of the house. I think if Paul didn’t have that secret power, she and Cody would have gone far in the game. She stood up for herself and Cody and I can relate because I always say what’s on my mind and I always get myself involved in situations where people mess with any of my close friends and/or family members.

What are you most excited about living inside the Big Brother house?
I am most excited to just live out my number one bucket list goal. I have religiously watched Big Brother since I was 11 years old and I have applied four times. I have a photo of the Big Brother logo on my vision board. It will also be exciting to meet new people around the U.S. and live somewhere different then Sarasota. I have never lived outside of Sarasota in my life.

What do you think will be the most difficult part about living inside the Big Brother house?
The most difficult part for me would be having to suck up to Houseguests I may not get along with. I have a very hard time putting on a fake smile because I wear my emotions on my face. I always say what is on my mind and I know in the Big Brother house that can put a huge target on my back. I will have to learn to keep quiet during situations where it is probably best not to say my opinion to help my own game.

What is your strategy for winning the game?
My strategy for winning the game is to win the very first HOH. I think the first HOH is the most important one. I would then be able to align myself with powerful physical and mental players, but I’d also try to make a final two alliance with someone outside of that. That way I can see the game from all angles. I think my social game is what will help me the most. I am very outgoing, understanding, and comforting. Houseguests will want to talk to me about their thoughts on other Houseguests and I will use that to my advantage by having a lot of people trust me. I won’t speak my mind too much on weeks that I am not HOH but put ideas in their head to get rid of certain people I think would hurt my game. Just like Tyler played on Season 20.

My life’s motto is…
“Invest your energy in things you can control.”

What would you take into the house and why?
-My dogs Piper and Jeter because just thinking about leaving them for three months makes me want to cry.
-My best friend because we talk and are with each other 24/7. I tried to see if she can fit in my suitcase, but there isn’t enough room.
-A DVD of all the seasons of The Office. Other than Big Brother, The Office is my favorite show. I have re-watched the show five times so why not make it six?

Fun facts about yourself:
-I was featured on a Hooters billboard and taxi top.
-I have my Drone Aircraft License.
-I have my Bachelor’s Degree in Broadcast Production.
-I did gymnastics for 10 years.
-I am launching a swimwear line.