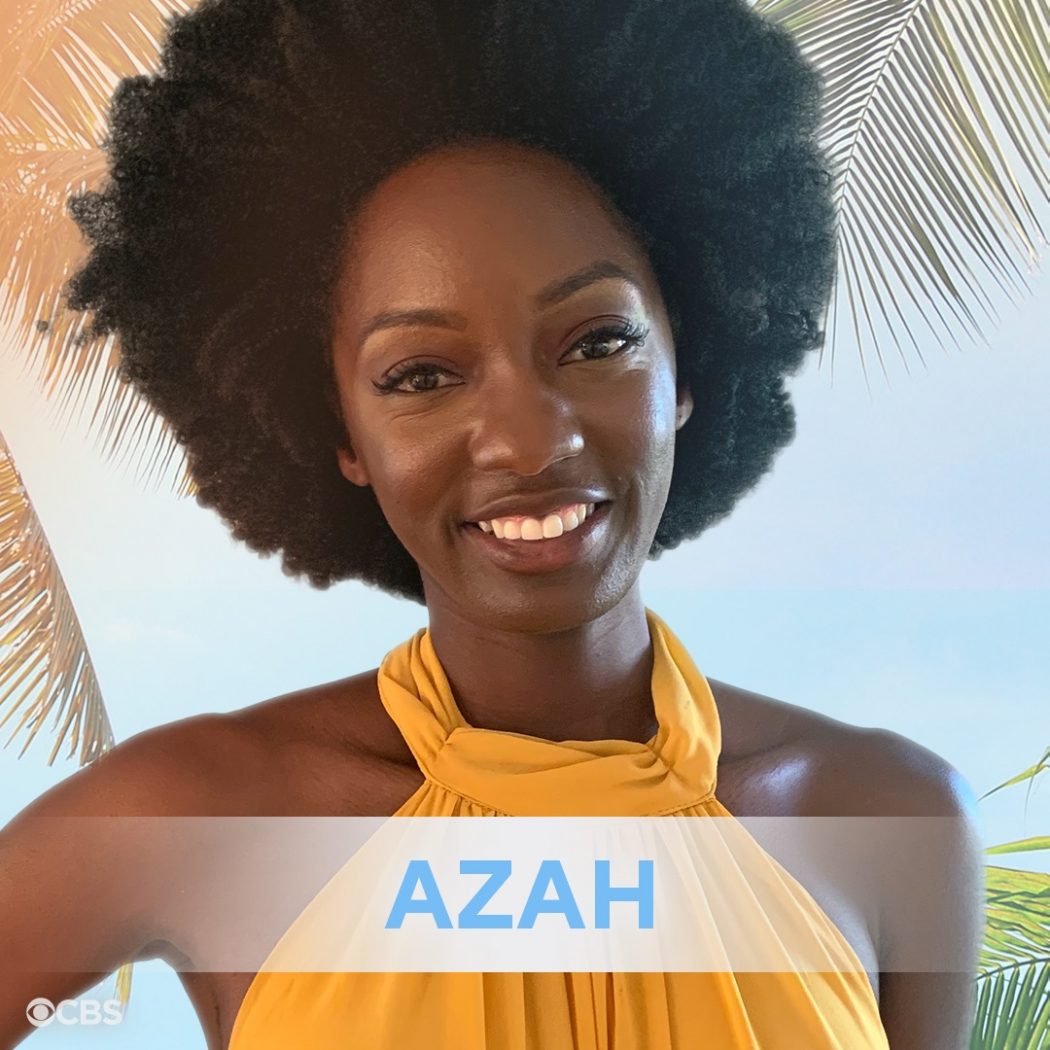 So let’s say this now about Azah – she hates showmances! She hates them so much that she mentioned it a few times in her bio. You know what this means, right?  She’s totally ending up in a showmance.

Alright, probably not an actual showmance, but my instincts tell me she’s going to meet someone on the show and end up being on of those who hook up after it’s over.  But enough about showmances because Azah hates them so I’ll move on.

She appears to be very knowledgeable about Big Brother. Either that or she only watched BB10 and really loved the birthday scene, but seeing as she also dropped an old school duo like Jun and Alison makes me think she’s more than just a hotel watcher (someone who knows nothing about the show but binges as many seasons as they can while in the hotel waiting for the season to begin).

I definitely like her approach of seeking out the stronger players and trying the divide and conquer approach.  That strategy is definitely much easier to plan than execute, however, but it’s still nice to see people think like that heading into the house.  I have a pretty good feeling we’ll see a lot of Azah this summer!

Three words that describe you: Charismatic, crafty, and clumsy.

Favorite activities: I love cooking! It’s one of my favorite pastimes. I am also an avid biker (just completed a century earlier this year) and a world traveler (26 countries and counting!)

Who are your favorite Houseguest duos? Those who became best friends in the Big Brother house or had a showmance?
I can’t stand showmances! I love duos. My favorite Big Brother player (Jun) was part of a duo. Alison and Jun from BB4 dominated the house with loyalty only to each other! I hope to get a powerful partner in the house and sit with them in the final two.

What are you most excited about living inside the Big Brother house?
I’m really looking forward to hopefully competing in OTEV. I am a beast at musical chairs, so I hope to get that Veto in the bag!

What do you think will be the most difficult part about living inside the Big Brother house?
Definitely being without my phone and not having my close ones beside me. I’m lucky to have most of my family in the area with me. I’m going to miss them and my seven best friends!

What is your favorite past moment on Big Brother?
Keisha’s birthday in BB10 is hands down one of my favorites! Too many iconic moments, Libra screaming her accolades to Jerry, Jesse instigating, Dan staying out of trouble, that sad “Happy Birthday” after everyone just finished screaming at each other… classic.

What is your strategy for winning the game?
Spot the power players early and annihilate or divide them one by one! Play for MYSELF, not the house. I’m hoping my amiable appearance will cause the guests to let their guards down with me. I want every Houseguest to feel like they have me in their pocket. Finally, I make really good decisions as long as there is no romance involved. NO SHOWMANCES!

My life’s motto is…
“You haven’t started living until you’ve started living for others.” This motto might not serve me the best in this game though… we’ll see!

What would you take into the house and why?
-My spices because I have no idea what seasonings they have in the house and I need some flavor in my life!
-My bicycle and my speaker because I’m always at peace when I’m riding it and listening to tunes.
-My afro pick because fro is life.

Fun facts about yourself:
-My grandfather was a polygamist with 6 wives and 47 children, I have over 300 cousins!
-My name means “able to make friends.”
-Avid traveler! Prior to Covid, I visited four countries per year.
-Afraid of manholes.
-Attended Messianic Jewish school for primary school upbringing.