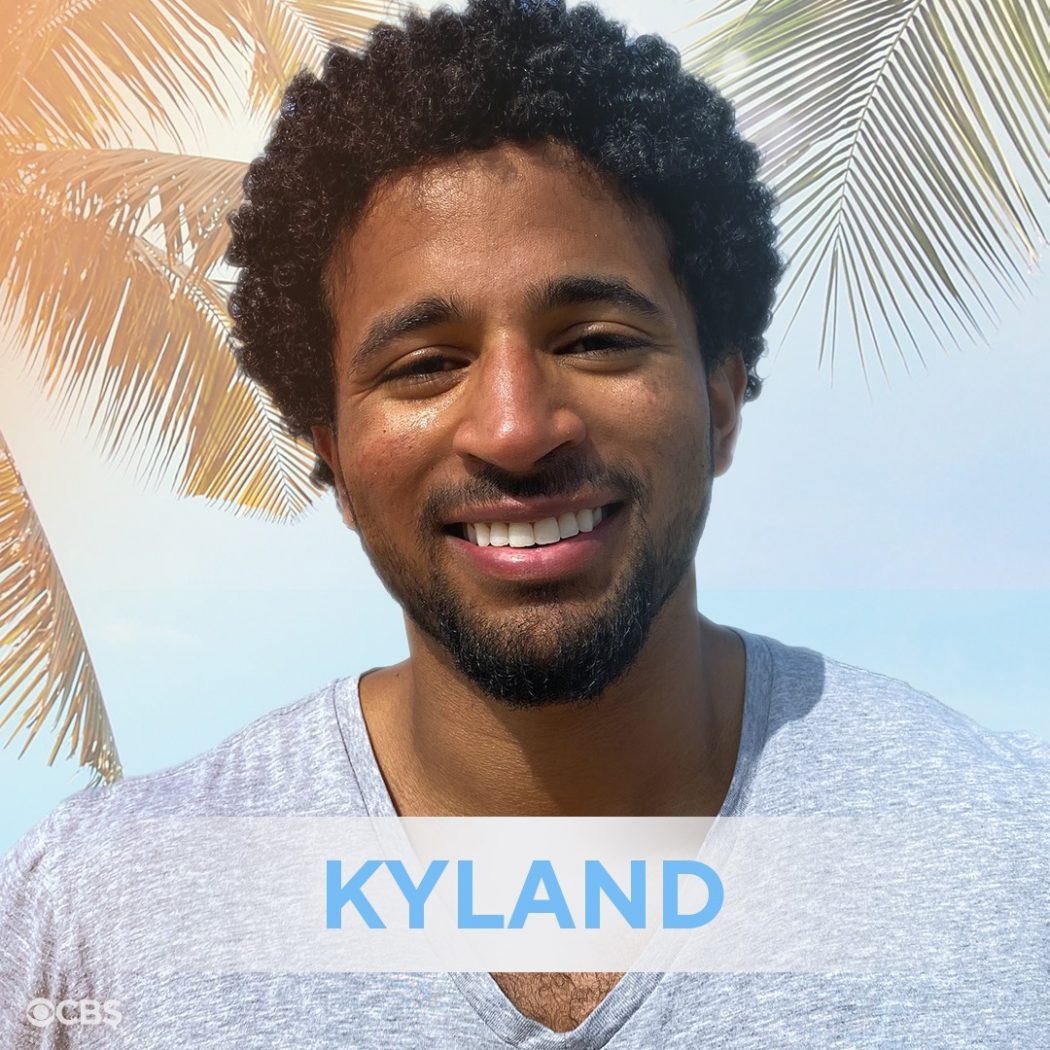 Alright, I am going to say it now. Kyland Young is my early favorite player heading into the season.  Does that make him a favorite to win?  No, nothing like that. He just checks all the right boxes in my fandom requirements and I have a feeling I’ll be rooting for him although trying not to show it when I blog.

Kyland is a movie buff who has watched every Best Picture over the last 20 years, he jokes he thinks he’s a secret Jedi, goes to comic-cons, and loves chess, escape rooms, and other puzzle games.  This guy is basically my spirit animal so I’m just going to pretend he’s me inside the house and how he does is how I’ll do.  Maybe not, he’s likely in far better shape than I am, but I’m still a fan.

Now, how will he actually do? That’s a hard one.  He seems to check all the boxes for actually winning the weird Big Brother competitions, and he does plan on laying low on that until late game. That’s smart. You never reveal you’re good at competitions until you can win your way to victory. It sounds like he is looking for a solid duo, and that’s also smart. Alliances are important, but there is nothing stronger than a ride or die you have 100% trust in.

The first few weeks in Big Brother are almost always a crapshoot, but if he’s able to survive that, I think we have a favorite for a top 5 player here.

Three words that describe you: Optimistic, dynamic, and engaging.

Favorite activities: Movies. I’m a HUGE movie fan, especially watching them at the theater. Popcorn is literally my favorite food, and I have a theater membership pass, which I typically use to see upwards of four movies each month. Also, games. Whether chess, escape rooms, football, or poker, I LOVE to compete in pretty much any type of games! And finally, trying new things! I love finding activities, sports, and places that can provide a unique and/or exciting experience. This attitude, (plus a whole lot of luck), is why I’ve been able to try skydiving, trapeze, surfing, sailing, magic tricks, slacklining, rock climbing, cliff diving, plane flying, car racetrack driving, skeet shooting, parkour, fire walking, axe throwing, and so much more! Having tried all these things, and always looking for new things to try, are also the reasons why I have so much trouble answering this question! 😉

Who are your favorite Houseguest duos? Those who became best friends in the Big Brother house or had a showmance?
I love the Hitmen! Derrick is one of my all-time favorite players, and I appreciated the loyalty and friendliness of Cody. Although I personally am not a big fan of Cody (Season 19), I did love his showmance with Jessica to the point I was excited to see him win his way back in to reunite with her, even if only for a short time. I also loved Tyler’s double duos in Season 20: he had a showmance with Angela, (which I am happy to see still going strong), but he was most loyal to his final two deal with Kaycee. I’m a fan of well-rounded strong players and loyalty.

What are you most excited about living inside the Big Brother house?
I am most excited about playing the game of Big Brother! I don’t care about being on TV, and I often forget about the fact there is a cash prize for winning. When I think about Big Brother, I get excited about the competitions and the social strategies that can help you win! I have always been good at building relationships and being persuasive, however, to have those things gamified in a way that I can be ranked by how well I do it, is like an injection into my competitive blood! I get goosebumps and a huge smile as I write this out and think about the Hunger Games-like dynamic of building trust and alliances with people all while being aware there is only ONE winner and you will have to turn on each other at some point. As a longtime fan, I’ve heard all the players talk about how everything is more difficult than they thought, but I love to be challenged, so that prospect only leaves me more intrigued!

What do you think will be the most difficult part about living inside the Big Brother house?
I think the most difficult part for me will be not knowing anything about what’s happening with my family. I am extremely close to my family! I lost my grandfather this January, and as the grandchild who was the closest to them, that was incredibly challenging. My grandmother is fortunately in good health and living in an elderly community center where she has lots of friends, plus a staff that is attentive; however, with her and my grandparents on my father’s side all being in their eighties, it will be difficult not to worry about them. Also, with the closest of my four sisters living more than three hours from my mom, and my other sisters all living in different states, I am heavily relied upon by my siblings to see my mom as often as possible since they cannot. To not be in contact and available to assist them with anything for the whole summer is definitely something I can imagine getting to me on an emotional level.

What is your favorite past moment on Big Brother?
I’m sure this is a cliche answer, but it’s hard not to be blown away by Dan’s funeral play in Season 14!! I remember watching that season for the first time a couple of years ago, and I was already aware of his getting second place in that season, and I remember watching the proceeding interactions and screaming out loud as I watched “How in the [email protected]$* is he going to get himself out of this situation!!!” I don’t only find it impressive, but it genuinely inspires me to the point of craving an opportunity to make a game move that just approaches such a legendary status as that one! Frankie’s solo Battle of the Block win in Season 16 is another honorable mention that does bring me to tears, even in the rewatch!

What is your strategy for winning the game?
My strategy is to combine the subtle influence of Derrick, with Cody’s charm, Dan’s strategic thinking, and hold back on showing how good I am at competitions until I have to (hopefully not needed until the end, like Kaycee in Season 20). I know that sounds like such a vague idealistic plan, but I genuinely believe that I have each of those attributes/capabilities I am describing. I have been studying the game and preparing mentally and physically to an unreasonable amount. However, I believe I have the restraint and tact to not give away that I’m as good as I think I will be. I’m well aware this all sounds arrogant, but I feel like knowing this, and the self-awareness I employ in my life in general makes me feel this is all possible.

My life’s motto is…
“Being realistic is the most commonly travelled route to mediocrity.”
“Destiny is obligated by universal law to concede to the demands of unwavering faith!”
“Gratitude is everything!”

What would you take into the house and why?
-My Black Panther necklace! I’m a huge superhero fan in general, but T’challa is a Black king of the wealthiest, smartest, and most powerful nation in the world. As a Black man, it’s difficult to explain how significant that is, and how the necklace helps
me feel empowered and inspired to be a positive force and example to others.
-My bracelet that says “UNREALISTIC.” I have not taken it off since I got it five years ago, because it reminds me of the motto I mentioned in the previous question (being realistic is the most commonly travelled route to mediocrity.)
-My favorite popcorn! If I can’t watch movies all summer long, I would love to have my favorite snack that can help me go back to my happy place in my mind!

Fun facts about yourself:
-I’ve done two firewalks across coals/embers heated to more than 1000°F.
-I read all the Twilight books (started in high school to have conversations with some senior girls who loved them, but finished them all because I got hooked).
-I have four sisters.
-I went to skydiving school.
-I’m pretty sure I’m a Jedi and any day I will be able to move objects using the Force.
-My favorite food is popcorn.
-I use a fake police badge to skip all the lines at Comic-Con since it’s the only place where you can “legally” pretend to be a cop.
-I’ve seen every Best Picture Oscar film of the last 20 years!
-I work for an app company that helps students find and win scholarships and other funds to help pay for their education.