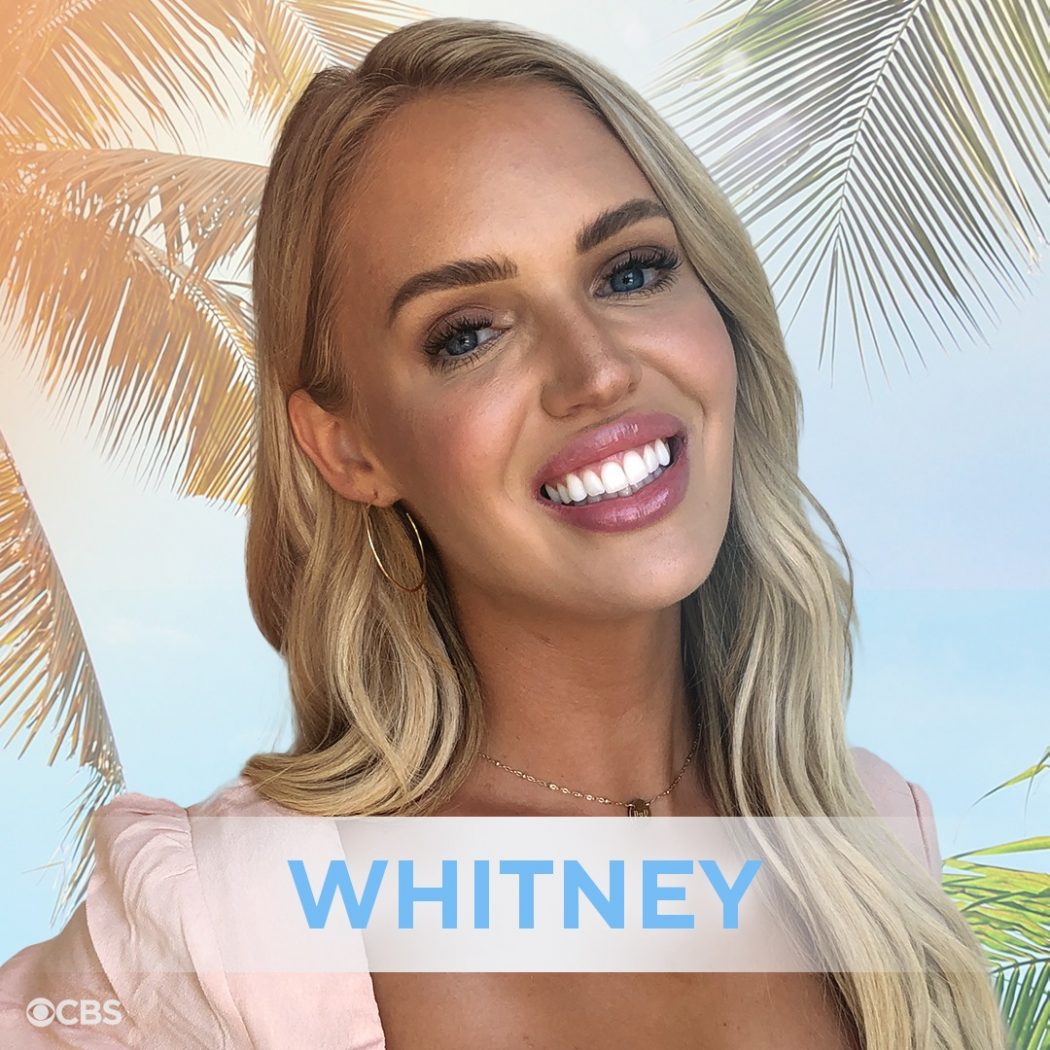 Alright, it looks like we found our showmance partner for Travis. I’m calling it now. I’m not sure if she’s married, but she’s definitely going to be doing some hardcore flirting. I mean her list of favorite duos are the big three showmances.

Whitney is already a pretty successful make-up artist as she founded NW Makeup + Hair. Not something I’ve heard of, but she has 16k followers on her personal IG so she’s doing something right. And if you’re catching on, yes, I’m reaching for things to talk about by now.  By the end of the profiles, I run of out things to say about these houseguests because they all kind of start blending in together. They all love Dan’s Funeral, they are all excited to be on the show, etc, etc.

How will Whitney do in the house?  I need to put some thought into this, but my early gut feeling is she may be an early exit. Why? Nothing really to go on.  This cast doesn’t have very many obvious early exit players, but people still have to go.  I don’t think she’s a first exit type of player but I wouldn’t be shocked if she’s home before jury. We’ll see beginning Wednesday!

Three words that describe you: Resilient, quirky, and outgoing.

Favorite activities: Anything adventurous. Traveling with my sons. Working on my business, laid back days with my besties.

Who are your favorite Houseguest duos? Those who became best friends in the Big Brother house or had a showmance?
SO many! Jordan and Jeff were the cutest couple in BB history, Jessica and Cody’s connection was so obvious that they would stay together outside of the house, and Brenchal was such a memorable power couple, even if you aren’t a fan of them individually you really can’t deny how incredible they were as competitors.

What are you most excited about living inside the Big Brother house?
To finally compete in some of my favorite BB competitions!!!

What do you think will be the most difficult part about living inside the Big Brother house?
Being away from my children, adapting to so many different personalities, and sharing only one bathroom!

What is your favorite past moment on Big Brother?
Watching Derrick Levasseur’s game play has been the highlight of the show for me, also Dan’s funeral (obviously, lol).

What is your strategy for winning the game?
Each season and cast is so different that it makes it hard to go in with an exact game plan, you really need to get to know the other Houseguests to know what will work. I do know that I’m going to go into the house as a strong competitor, while hopefully not making too many ripples. I also want to uphold my values and create genuine friendships, but winning this game for myself and for my children is my top priority.

My life’s motto is…
“Why not?” Why not take that risk, try that thing, talk to that person? Life is too short to live with regret for not doing that thing you’re considering doing, there’s only one way to find out what you’re truly capable of… so “why not?”

What would you take into the house and why?
-Photos of my sons, I can’t imagine what it will be like not seeing their faces for so long.
-Music, lol does this really require explanation?
-My entire wardrobe. One suitcase of clothes for three months is going to be brutal!!

Fun facts about yourself:
-I was named after Whitney Houston, but I can’t sing in real life.
-My company was nominated for the Best in Oregon Award only three years after I started.
-I’m an excellent matchmaker, and even tried getting the tooth fairy and Santa Claus to meet when I was seven (Mrs. Claus who?).
-I can wiggle my nose like a bunny.
-I developed my own Tillamook ice cream flavor that you can actually buy in stores (keep an eye out for white chocolate raspberry).