Big Brother (US) is a reality TV series on the CBS network that first aired on July 5th, 2000. The concept of the show is that up to 16 people enter the house at the beginning of the summer and spend the next 3 or so months being filmed 24/7 by cameras that are broadcast to paying subscribers.

The show is currently on it’s 23rd season which does not include the 2 Celebrity Big Brother seasons, and the 1 web-exclusive Over the Top season which featured virtually uninterrupted live feeds.

Every season typically has a bunch of twists and different formats, and Big Brother 23 began the season as four teams of 4 players.

While I’d love to have an amazing alliance map, I’m not going to re-invent the wheel when someone else has done it so well. 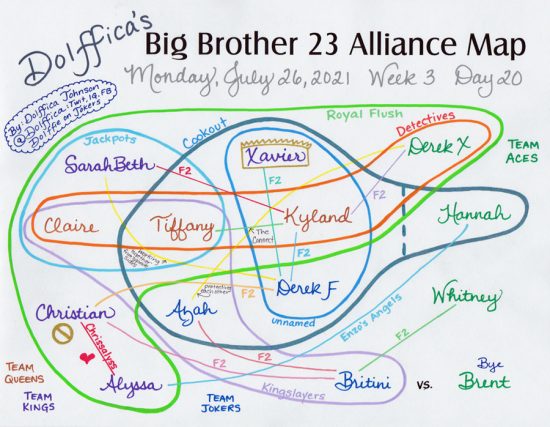 Day 24: Brent is evicted from the Big Brother house
Day 21: Christian does not use the veto. Nominations remain the same
Day 18: Christian wins the Power of Veto
Day 17: Brent and Britini nominated
Day 17: Tiffany wins the wildcard competition. She chooses not to accept the power
Day 16: Xavier wins Head of Household

Day 16: Frenchie is evicted from the Big Brother house
Day 13: Derek X doesn't use the veto. Britni and Frenchie are the final noms
Day 11: Derek X wins the power of veto
Day 10: Frenchie and Britini nominated
Day 10: Sarah wins the wildcard competition. She chooses not to accept the power of switching teams
Day 9: Kyland wins Head of Household