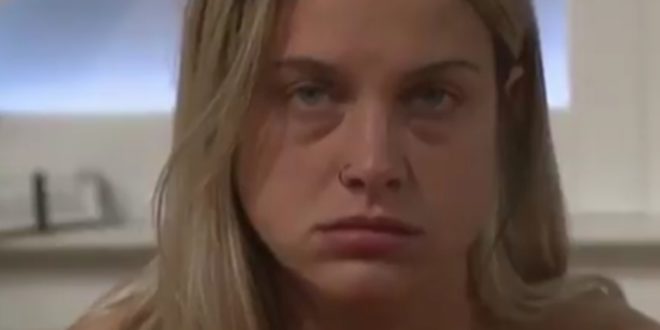 Good Monday morning BBJ gang! I hope you all had a great weekend. As usual, the Monday recap should be shorter than the others due to work and Sunday sometimes being a slower day in the house. I try to be as consistent as I can (which I know doesn’t always work out) but for the most part, you can usually depend on  Mondays recap being short and Fridays being posted later than the others.

Christie decided not to give up, swallowed her pride and gave it a try with Jackson. Other than a couple other things, that’s about all that happened yesterday.

The day began with Cliff camera talking and saying hello to hs family. He let us know he’s worried about Tommy going after him, has considered approaching him but he’s afraid to make another deal.  He thinks he’s pushed his luck about as far as he can with deals and said they’re getting to the part of the game where they just need to win to be safe. Tommy joined him and they talked about many of the places Cliffs traveled and details about his job. When I listen to these to talk, I’m aware of what a great duo they couldve been. They’ve both played the game with logic and except for the night Tommy got wrapped up with the angry house meeting, they’re both always very calm and even tempered. This also could be the reason they’ve never worked together. Since they’re both decent players, they know to be wary of each other. Sam and Cliff were 2 of Tommy’s main targets from almost the beginning. Cliff will work with anyone but he’s never trusted  Tommy.

Nick and Tommy talked about the game after this week. Tommy thinks he wants to talk to Cliff and maybe make some kind of deal.  Tommy mentioned the appeal for some people to keep Christie because she would remain a target and she could take a shot at Jackson. Tommy doesn’t want Nick going around saying he’s loyal to Tommy, Sis and Nicole. He said it will cause them to go otb together. Nick said he doesn’t tell other people he’s loyal only to them.  (He does) 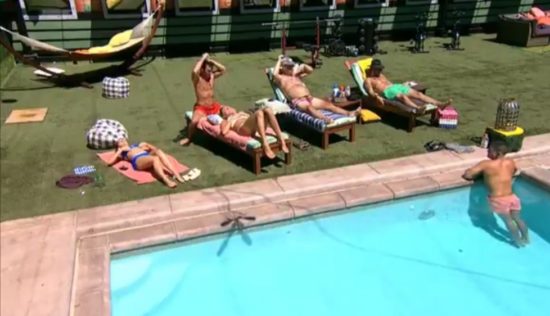 There was a conversation by the pool about internet trolls and how they might come after the cast once the show’s over. Jackson (always wanting to be the hero) said he’s coming for anyone that goes after any of them. He said they’ve all become friends and he only cares about what the cast and his family thinks. Nick said he’d make a fake account to troll other people. He also said he’d hire someone to track the ip addresses, get peoples real identities and send the things they say to their jobs to get them fired. Cliff said “yeah, that won’t go over well.” (Cliff’s a grown up)  I wouldn’t harass hg’s but hypothetically, if I were going to harass Nick, I’m self employed. He’d have a hard time getting me fired unless I was really pissed off at myself that day.

Sis and Christie start talking about a plan to get one of them off the block. Sis pumped up Christie about talking to Jackson and said she felt so much better after getting things off her chest the night before. They compared notes on Jess and think there is a chance of getting her up as a replacement. They were trying to come up with different deals they could offer Jackson that might be appealing. Sis had already talked to  Beth trying to make it sound like Jess was starting trouble and spreading rumors. 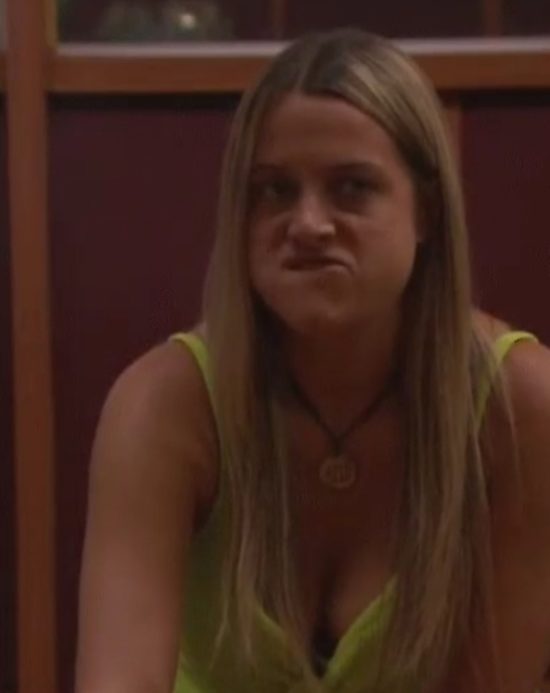 Christie pitched to Jackson and Beth. They both said they respected the other and Jackson said he had gained more respect for Christie over how she’s handled being on the block. (true, he’s mentioned it but compared to Sis, anyone would look amazing) Christie said America would love the comeback story of the alliance getting back together and said Jackson and Beth would need help moving forward.  She said, as a shomance, they’d be big targets. She promised to put everything behind them and work together to take out the others. Beth and Christie talked after this meeting was over and patched things up on more of a personal level.

Tommy suggested Jackson offer Christie any deal that made him feel comfortable because he felt sure, at this point, Christie would take it. Christie, Sis and Tommy all started hinting at Jess as a possible target in different conversations. Nick was also mentioned and by the end of the day, they were mainly focusing on Nicole. Christie likes Jess and didn’t really want her to be otb yet. They knew Christie would never come off the block but were  hoping maybe Jackson would take Sis down. I think Cliff may have also been mentioned.  Jackson basically said he had sleep on it and think things over.

Beth seemed to get on board with getting the group back together because she’s worried theyll have no one moving forward. As I’ve said before, Beth never really left this group. (Physically yes, emotionally no) She just lets Jackson think she’s left. She’s spent 2 months in a shomance so the friendships she made early in the game are basically all she has to work with.  I’ve  also mentioned the way she was hinting at Nick for a possible nomination before they were made.  It didn’t take her long to start suggesting Nick as a renom.

Jackson told her it wasn’t happening. He said Nick is playing all sides and does need to go but Christie needs to go first. He told her what he’d told Christie and Tommy about being afraid of Christie in mental comps. He knows he has a better chance to get her out now instead of later. He said he’s been burned by them before and he’ll look like an idiot if he doesn’t do this now. He reminded her they’re already on their own and he wasn’t buying what they were selling. Jackson thinks Tommy will be just as big of a target as they are after this week.

Nick was on some kind of weird Jess obsession yesterday. He’d already been talking about Jess being his only target and needing a pawn to put up with her. Yesterday, he took it to another level. He went from person to person telling them that all Jess does is talk about him and about getting him out. Repeatedly, people told him they hadn’t heard her saying things about Nick. (Jess has mentioned Nick but she certainly isn’t obsessed with it) Nick is worried about Jess because he thinks he’s playing a great floater game and thinks Jess is the only one after him. (Nick’s actually playing a terrible floater game and has bigger problems than Jess. Everyone knows what he’s doing but he thinks he has it hidden.  It’s comical to watch)

‘m not saying Jess isn’t on anyone else’s radar. From what I’ve seen, she plays a fairly similar game to Nick. She sticks her nose in situations when it isn’t necessary. There are times, when the only thing she needs to do to be forgotten about, is just shut up but she cant seem to do it.  I think they’d both almost rather be targets than be ignored. Along with Sis and Christie tossing out her name yesterday, the guys were talking about her too. Cliff, Nick, Tommy and Jackson talked about being worried over Jess’ obsession with not putting a woman otb and wanting a woman to win.

They thought they might get alcohol last night but got suff to make cookies instead. Nicole did a little oven mitt dance: 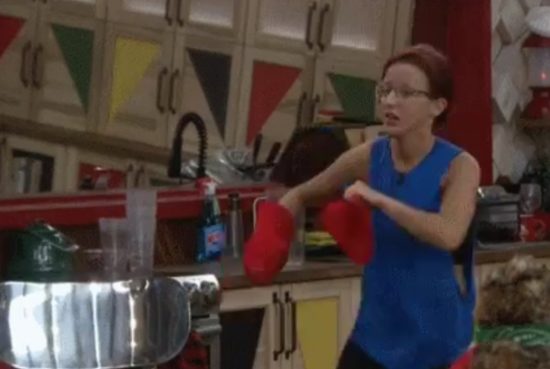 It reminded me of Justins oven Mitt dance from OTT: 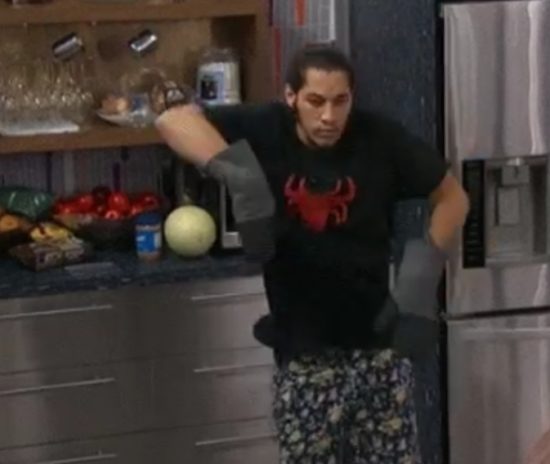 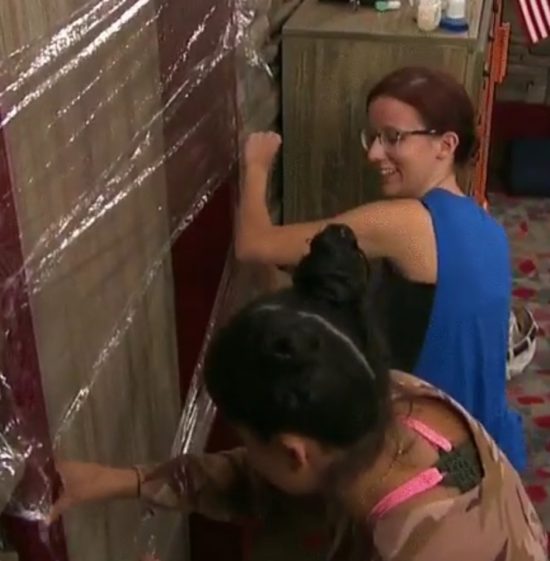 That’s about it from yesterday other than Sis saying she doesn’t want a floater to win. She only wants people who’ve worked hard and done a lot to be there. Yep, she puts herself in that category. She’s mastered the shower stool, made eggs and begged America for a power? What am I missing?