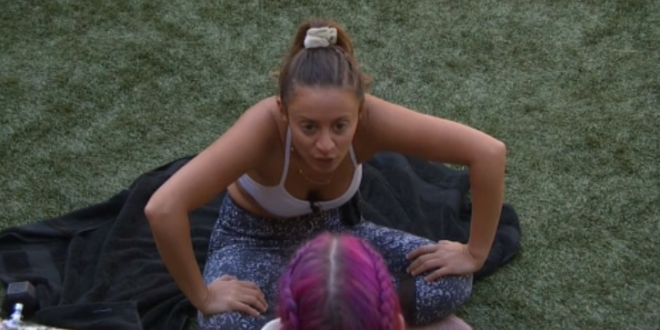 Good afternoon, everyone! What a wild night in the Big Brother house. It’s been covered quite a bit by me last night and Mel this morning so I won’t ramble too much about it. We all know about Kaitlyn’s crazy night as she’s still trying really hard to be trending even though that twist has ended, but I want to talk about someone else – Sam.

How many caught her extremely awkward interview with Brett last night? She sat there for a solid half-hour in one of the weirdest conversations I’ve ever seen on the feeds where she rambled on and on and on about all types of crazy things. She went from asking if he was going to mercy kill her by voting her out because he thought she doesn’t want to be there to talking about the financial situation of everyone in the house. It started around 7:20 and definitely worth a watch if you have 30 minutes to kill with her talking in the background.

Today would have been a bigger day in the house had Kaitlyn’s meltdown didn’t happen last night. Brett and Winston had a shred of hope that Scottie was going to replace one of them with Kaitlyn (even though it was never going to happen) but that was dashed last night in the blowup. I’m sure the bros fully expect Scottie not to use the veto which means one of them will be going home this Thursday. Gears will shift to each of them campaigning through a proxy with Brett using Rachel and Angela and Winston using… well, he doesn’t really have anyone. It could get ugly as the week progresses which is why I’ll be monitoring that closely!