Travis
Evicted
Home » Big Brother 13 » Is This The Biggest Week In The House?

Is This The Biggest Week In The House?

This upcoming nomination is probably the biggest decision Adam will ever have to make, possibly inside the house or outside.  I can’t imagine many decisions outside the house that have a $500k check riding on it, so this may be his biggest ever.

He has two choices, stay loyal to his friend, or actually make a move in the game and side with Daniele.

While staying loyal to his friend may seem like the logical decision, the variables around it make it seem like a very bad choice right now.   I just spent about 15 minutes listening to Jeff go on and on about how he is tired of Kalia and Porsche because they’re ultimate floaters and have done shit in the house.  (note: While that’s true about Porsche, Kalia has at least been playing the game – when she’s not napping).  Here is the situation for Adam, though.  Staying with Jeff makes him exactly like Porsche, with the only difference being that he’s voting Jeff’s way, not Daniele’s.  There has been almost no difference between Adam and Porsche’s game this season.

Jeff assured Adam that if it came down to it, he would be picked over Rachel, but pretty much glossed over how tight his relationship with Jordan is.  He made sure to mention that obviously he’s working with Jordan if they are down to the final 4, but he’d pick him over Rachel for the final 3.  I wonder if Adam realizes just how strong that bond is?  I mean, it’s almost an unfair bond because there is absolutely zero chance Jeff or Jordan would ever pick him over each other for the very simple reason is if one wins, they both win.

This path means that Adam will basically have to try and get lucky that Porsche or Kalia end up splitting up Je/Jo, and then eventually get them both out and he somehow is miraculously in the final 2 with Shelly, Porsche or Kalia.   However, even that isn’t a guarantee because it won’t be Adam getting out J/J, and he’ll just appear to be the floater that Jeff hates. 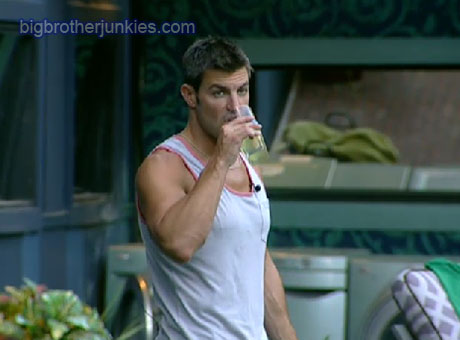 The other option is to side with Daniele, which also has it’s pros and cons.    The immediate con is that he’ll lose rank with Jeff, and he’ll pretty much be completely on his own the rest of the way.   Adam knows he’s not good enough to do that, so that scares him.   When he tells Daniele that he’s scared of her, I think what he really means is that he’s scared of being alone because Jeff is just as much, if not a bigger threat than Daniele is.. that’s for sure.

However, with that becomes an immediate 4 vs 3 alliance (in his favor), and 4 vs 2 in the next HoH competition, with a very weak Jordan being 1 of those 2.  This gives his new alliance a very good shot at winning the HoH, splitting  up Jeff and Jordan and possibly ending the double elimination week with a situation of Adam, Shelly, Daniele and Porsche vs Rachel and Jordan.   I’d take that any day of the week to be honest.

I know this is a lot to take in, and may bore some people, but the balance of power is really going to be decided on the 2nd biggest floater in the game, yet possibly the biggest Big Brother fan there is in the house right now.   If anyone should know what the ‘right’ decision is, it should be Adam, but right now I think he’s honestly going to make the worst move possible for him by siding with Jeff.

I have a feeling the live feeds are going to continue to be entertaining, and the campaigning is not over  yet, especially by Shelly, so make sure to pick up the live feeds and watch them for yourself.  Now that the summer is winding down, may as well grab them for 3 days free so you can keep up with the house between episodes.

Get your live feeds here for free!