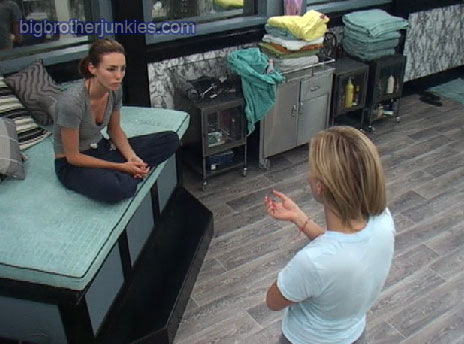 Thanks for @christielittle for my overnight tip

Tune in your flashbacks to 5:15 AM (camera 1) last night to see Cassi and Porsche have one of the most passive aggressive arguments you’ll see all week.  Both girls are sitting in the bathroom doing a horrible job trying to clear the air between the two, but failing miserably at this point.  Cassi keeps saying they don’t mesh but she has nothing against her .. blah blah, while Porsche is trying to defend herself but not come off bitchy so she doesn’t lose votes.

I get it, both girls are threatened by the other because they each want to be the hottest in the house, and never really got along because of it.   From what I’ve observed, Cassi is the hot girl who hangs around with all guys and plays the tomboy role because she loves the attention that gets her, while Porsche takes a different approach and is more of a party girl who gets her kicks off of the drunk guys at her club.

This combo is a recipe for conflict from the start, and I think the only reason they haven’t blown up more is because Porsche is on the block and trying real hard to save her ass.   Listening to that discussion, Cassi clearly had the ‘upper hand’ in the conversation, but it also bored me listening to such a lame conversation because of the impending vote.  I want some yelling, kicking, screaming! Well, maybe not that much, but the passive aggressive shit has got to go.  If you don’t like each other, say it.  Don’t act like you speak your mind (Cassi) then hold back.

Aside this little spat, it appears Brendon and Rachel had another argument as (from what I gather) she was making an ass of herself (yet again) and he’s growing tired of telling anyone who will listen that she’s not as annoying as she comes across to everyone she talks to.