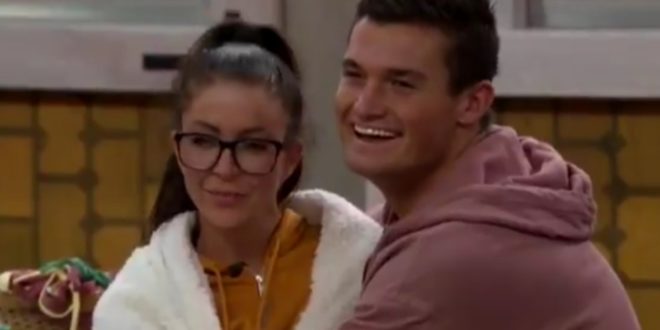 Good morning. I hope there are at least a few of you still here to read this because many people were deflated after the veto comp yesterday. I’ll get to the recap but here’s some other things I wanted to mention first.

I don’t ever remember the jury getting their comics while they were in the jury house but they did this year. They unwrapped them one at a time for a big reveal:

Lets talk about Cliff since he’s probably going home. Cliff recently told Nicole he was afraid he wasn’t himself and was starting to make bad decisions. (This was after he told Jackson he’d keep him if he won veto and after Nicole had to remind him, he’d be the only vote this week if he won it) They’re all mentally exhausted but I think it’s worse for Cliff because of his age. I’m not saying he’s old, he’s just older than they are. He’s also used to getting up early and maybe they arn’t. Unlike the oldest hg in other seasons, (who goes to bed while the youngsters party on) he stayed up with them but continued to get up early. That’s a hard place to sleep anyway but to keep up that pace for 3 months is a lot.

With all the stress over having a big decision last week, it’s been worse. The comps have been hard on Cliffs body too and I think all of them have felt some lingering effects from Thursdays house meeting too. We’re only going to see a few minutes of it tonight but whatever was happening went on all day long. It was hours and hours of not knowing what to do or who to believe. Most of us even made comments Thursday night about how different and wiped out they looked that night. We’ll never known all that happened on Thursday but it’s definitely taken its toll. Usually, the wnner of the last hoh feels like they’re making a $500,000 decision when choosing who to take to the F2 but this year, I think they felt it was similar on Thursday. In a way, it was the same situation because keeping Tommy or Beth really came down to the same reasoning. Cliff knew he was probably guaranteed F3 if they kept Beth. Nicole knew it too and felt she had a better shot with Tommy….if Tommy wasn’t lying to her. I’m not making an excuse for Cliffs dumb moves recently. Many players have been in the house for 3 months without losing it.  I’m just saying, I believed him when he said it was affecting his thought process.

I think there’s also a 2nd reason for the desperation from Cliff. When a deal was struck to throw the hoh to Nicole, in order for her to avoid feeling like the “4th wheel on a tricycle,” Cliff was a huge part of her getting the deal. This took away one of only 3 spots so he was trying too hard and too soon so secure his own. The entire reason Cliff preferred to keep Beth was because it increased his chances to make the F3. He basically gave up the spot he was keeping Beth to get. How does that make any sense? (It may also be why Jackson was soooo supportive of the idea for Beth to throw it) Jackson may not be that smart and maybe didn’t think of it but having Beth throw the hoh was great for Jackson. It gave him better odds to stay this week. If Beth’s safe as the hoh, there’s nothing left for Cliff and Nicole to debate, assuming one of them had the one vote to evict this week. If Beth throws the hoh, Beth and Jackson both remain options to go if they lose the veto.

All the lying Friday was dumb for all 4 of them because it wasn’t necessary. They can make all the deals they want but they don’t matter at the final 4. When one duo wins veto, someone from the other duo goes home. Sorry, Cliff, you can’t have everything just because you want it. The same bad game play can be said for Beth and Jackson too. (They looked like geniuses compared to Cliff on Friday tho) Why continue all the lying and saying Beth would evict Jackson when it didn’t matter anymore? No one is deserting their partner at this point so it’s all for nothing. Sure, Cliff believes it for now but what’s to gain from tricking him for a couple of days? People can say Cliff should’ve kept Tommy but Cliffs mistake in my opinion, (other than the “deal making” the other day) was not pushing for Tommy to leave when Christie was evicted. Christie would’ve worked with Cliff over Jackson and Beth. Tommy would’ve already been out of the equation and Cliff had a better working relationship with her than Tommy. He could’ve more easily given up Beth and gone into the F4 with Nicole and himself as the last remaining duo. Christie and Jackson were NOT going to trust each other and work together. (Christie also said in her jury questions, not working with Cliff more was one of her regrets)

Before the feeds cut for the veto comp:

Later, once they got comfortable for the evening:

Yesterday may not have ended the way some of you wanted but this is where we are. No sense crying over spilled watermelon juice. Last summer, I had a watermelon explode while it was sitting on my kitchen counter. It took me hours to clean it up because it ran down the cabinets and dripped in some of the drawers, along with all over the floor. Because it’s so sticky, I had to clean it up, wash everything with soap and water and then do it a second time. I’ve never had that happen and still dont know why it did. I hadn’t thought about it again until just now. You don’t think I manifested this, do you?

I’m ready for tonight and hope we get to see a lot of the blow up from Thursday so until then, have a great Sunday.