Can Queen Sleepsalot Pull Off A Miracle? 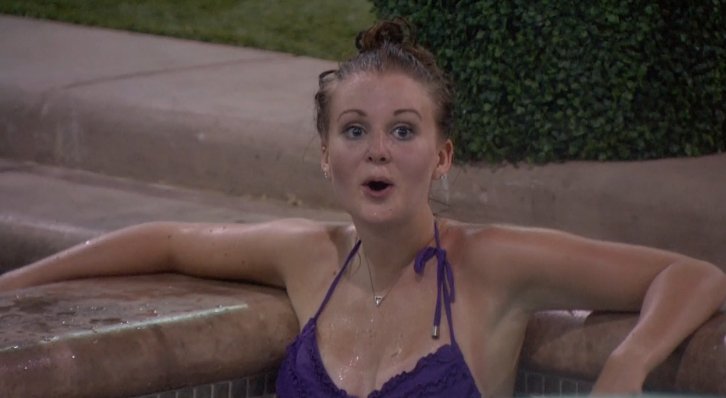 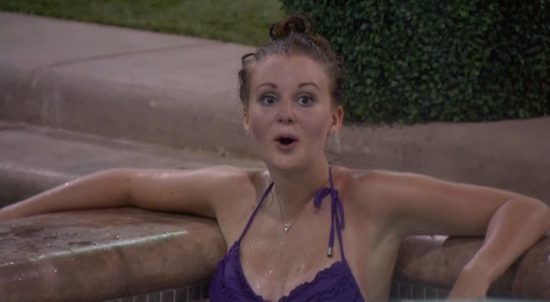 What a difference 24 hours makes in the Big Brother house. Yesterday around this time, I was about 95% certain that Michelle will be walking out the door tomorrow night, but now it is down to about 75%. I know, not much of a difference, but that is because her game is currently relying on a few variables. One of those being James and his willingness to actually go against the house for once in his life.

Let me summarize last night as best I can… It all began with something being pulled from Michelle’s butt. Seriously, but only metaphorically. I flipped over to the feed with Michelle talking to Bridgette and the first thing I heard was “I wish I could pull something out of my butt”.  This comment resulted in the two actually doing something we have rarely witnessed people other than PP do so far this season…. (I hope you’re sitting down for this!) …. brainstorming on how to flip things in their favor!  Wow, it’s like they finally realized they were actually on Big Brother and not at some summer warehouse … err, summer home where they spend all day tanning, eating, and working out.

After some discussion, the two actually came up with a pretty decent plan, and it’s better than they even realize because they don’t fully understand the complex douchery that is Paulie towards Z. Discussing how Nicole and Z get jealous over the dumbest things, Bridgette suggests they start flirting with Paulie to piss off Z. At first it sounded like a petty suggestion just to be mean, but when the lightbulb triggered inside Michelle’s head (as witnessed in the image above), she realized what this could actually do. By “flirting” with Paulie (I use that term loosely), they want to work Z up to the point where she starts fighting with Paulie over dumb things.. like Bridgette giving Paulie a manicure or facial. That is why I put flirting in quotes because we’re not talking about them rubbing Paulie’s junk (though Michelle joked Bridgette should offer him a testicle massage). We’re talking about harmless stuff that goes on in that house when you’re trapped in together for months. I mean Paul has been wearing a damn rubber duck float for no reason other than boredom for the past 3 days, so people get stir crazy and do weird stuff. It happens.

Now that is the first part of the plan. The second part is to start getting people on board with the ‘save Michelle’ campaign, and the first stop was Natalie and James who were still hanging around together probably talking about flowers and rainbows. Michelle comes into the room and immediately begins talking about Paulie. She tells Natalie how Paulie has mentioned that Nat is just a trashy Jersey girl and to watch out for her (I’m paraphrasing),  and a few other little things Paulie has said about Nat. Michelle drops the mic and leaves the room allowing for that seed she planted to quickly grow into anger, and that’s just what it did. Natalie spends the next 30 or so minutes venting to James how awful Paulie is. He has apparently made comments about how she has the nicest ass in the house, and how when they’re alone he says things like ‘he wants to wifey her up’, and even suggested making out without James/Z finding out. James sits stunned for quite some time, but trying to play devil’s advocate to excuse Paulie’s behavior. I initially thought James was defending Paulie (as did Natalie, and she called him on it), but thinking back, he was clearly trying to convince himself Paulie wasn’t being malicious just so James doesn’t blow a gasket and ruin his own game (that’s a pretty common defensive mechanism, and shows how much James cares for Nat).

After failing at convincing himself that Paulie isn’t a douchebag, reality starts setting in and he tells Natalie just how dumb he feels. He is embarrassed and annoyed that Paulie would disrespect him behind his back like that, and he sits there stewing for a little while until Bridgette comes in. James immediately wants to vent about the situation to Bridgette, but Natalie said she doesn’t want to re-live the conversation, and she’ll tell her in private. However, Bridgette mentions the plan to flirt with Paulie, and James agrees that one of the two should do that.  Natalie keeps asking if they’re messing with her, and if this is real life, but both say that will be one of the better ways to cause a rift in the house.

The conversation breaks, and Bridgette finds Paulie and immediately works on him by offering a facial, while giggling at whatever he says. She tries real hard to flirt, but is honestly terrible at it, and it came off as extremely awkward and uncomfortable to watch. Despite her poor performance, she keeps going, and plans to do some more today. This is when I passed out, but I will keep an eye on the feeds today to see if the girls can cause some tension between the fakemance.

Another way for them to save Michelle would be if James stops kissing the houses ass and uses his new power to eliminate two votes that are guaranteed to go against Michelle. The current people voting right now are:

With 2 votes gone, that means Bridgette or Z need only 3 votes to remain in the house.  All James has to do is eliminate the votes of any combination of Paulie, Paul, Nicole, or Corey, and he can vote with Bridgette and Natalie to keep Michelle. It’s that simple. Considering Victor was originally on board with getting out Z, and is also deeply concerned about the direction of the house (couples vs singles), they can pull him in to an alliance of:  James, Natalie, Michelle, Bridgette & Victor.  That is 5 out of 9 people leaving just Corey+Nicole and P+P to fend for themselves.

The sad part is this. Despite having the power and the numbers, James still mentioned numerous times how he’ll only use the power if the house backs it. What kind of horseshit is that? By him using it and eliminating Z, he is creating the new house majority. All I hear when James talks about ‘the house’ is whether Paulie, Nicole or Paul will get angry if he goes against them. If James does not do this to help chip away at Paulie’s numbers, I will officially stop rooting for him, hopes he gets evicted and doesn’t win America’s Favorite. Not because I have a special thing toward Michelle, but because it is insulting to the game of Big Brother to sit on such power and keep kissing the ass of the guy who is eventually going to win with ease unless something is done about it.

As of 12pm, the house is still mostly sleeping, so I will start a live update thread in a little bit