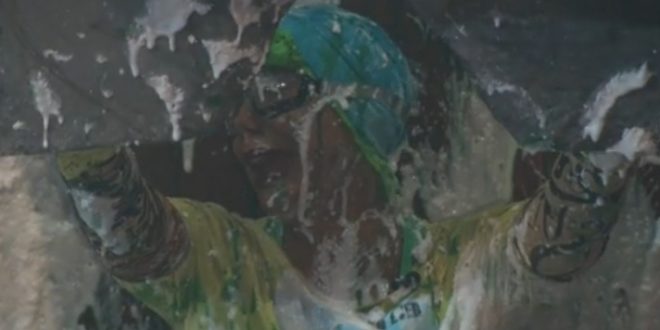 Last night the houseguests had an endurance competition which brought out the best and worst in some people. It was the wall competition where they were also able to hold on to some grips which resulted in a fairly long competition even for amateurs, let alone celebs. Here are a few things I learned during this competition:

As I mentioned, Kato emerged as the winner when Natalie (Eva) dropped for him once Joey fell. I’m not exactly sure she could have beat him anyway, but she definitely threw it to him at that point because she knows she’s safe, and she is. Kato’s initial target should be Dina but it’s unclear who will be sitting next to her at this point. Or if he tries the backdoor approach. Either way, he knows she is coming for him and was rooting for Joey last night, so he wants her out. Tom may be able to talk him into a stronger player, but his mind is set on her for now.

After the comp, players were mostly complaining about the green in their hair. It was more noticeable in those with lighter hair like Dina and Lolo so they were complaining the most. Ryan made a pitch to Kato that he’s willing to work with him and came clean on his old alliance with Jonathan, but I don’t think it made any real difference. Kato is either going for him or he’s not, Ryan’s pitch did nothing to change it. Kato has his 4-person alliance he is happy with.

Noms are today, and I expect veto tomorrow. There is an episode on Monday which I expect to be another eviction so these next few days will be rushed along as expected.

Check back later for the live update thread!