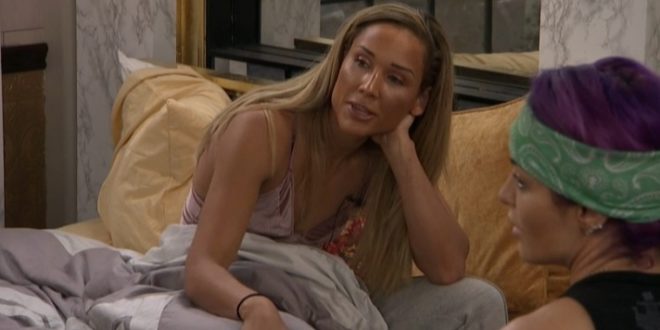 It seems just like two days ago, Joey was refusing us with just one ‘woah’ as he was kicked out of the house. Oh, wait. It was two days ago. Damn you, Joey!  Not even one ‘woah’?? Even Julie tried to pull one out of you but you blew it off. Bro, that’s what you’re known for. Give us what we want! What’s next? Even Lil Jon had the decency to give us one of his phrases during his Super Bowl commercial.

It was a busy day outside the house as some drama is unfolding in the Big Brother alumni land. I am going to write a post about it, but trying to get a little more information on it, so stay tuned!  I do have a question, however. I saw someone in the comment section mention the PPV of Swaggy/Fessy was $15. Is that indeed the confirmed price?  I’m trying to crunch some numbers.

Inside the house, well, Tom or Kato are gone. I don’t know which one. Doesn’t really matter because the other will likely follow him either next or shortly after. Unless the remaining player gets some pity and is able to re-join the house which I’ve seen happen before. Many times, the house is content on breaking up a duo but end up with bigger fish to fry once that duo is split.  It is very possible that Tom will be voted out tonight and they’ll kind of forget about Kato.

I hate that it seems like I’m playing favorites, but it’s because I am. Lolo and Tamar are full of drama and exaggerate the way people act which is not cool. Natalie and Ricky are not as bad, but they enable the poor behavior so I’m just not a fan of the entire Bedroom Bunch. I still think Natalie is going to win, but I’m personally not a fan. Out of those remaining in the house, I want Kandi or Kato to win with Dina as a long third option. I try not to openly root for people (although I’m sure you can guess who I root for by the way I write), but in CBB, I’m all out in the open. I’m team Kato/Kandi.

Ok, the live show is about to start so let’s get to covering it!