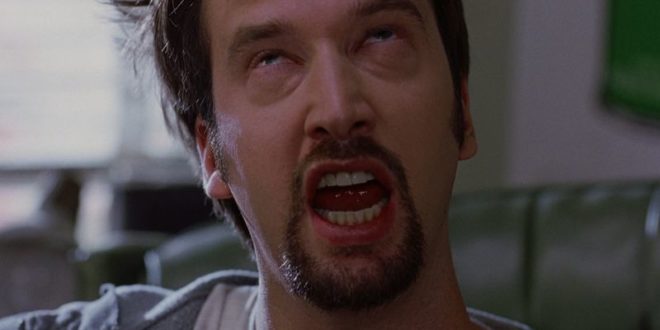 It’s night two of the premiere of Celebrity Big Brother 2 and we finally get to see who wins HoH and who is on the block between Ryan and Jon.

Let’s do a little recap of the cast so far… I gotta say, I enjoyed the premiere a lot more than I thought I would. Tom Green was what I expected and look forward to watching him on the feeds. We watched Eva Marie say to Kato what us Big Brother fans have been dying to say to those super annoying people sitting on the sidelines yelling random encouragement at the players (looking at you, Scottie). Lolo and Ryan have some weird Olympics rivalry going on while the two who were initially supposed to be rivals (Kandi/Tamar) got along okay – so far. Joey is not going to say ‘woah’ unless he wins which is crap. That’s his greatest (and only) hit. It would be like Vanilla Ice not signing ‘Ice Ice Baby’ if he ever performed again.

Tom Green talked about his balls a little too much. Not that I have a problem with him talking about his balls, but I just hope that’s not his only material.  The Mooch acted as expected, as did Dina Lohan (which isn’t good in Dina’s case). Jon made too many Mean Girls references which was cute the first 10x, but that’s another thing that will get old quick – like Tom’s ball(s). Ricky was boring, which is typically a good thing early on. Better to be boring and under the radar.

The endurance comp looked pretty cool and was jealous they had that on this season until I remembered Julie said they just have to get a ball out of the cup. Meh. I want to see that competition except they need to fill that entire glass. BB21 maybe?  I do like the little twist of teaming them up and one of them being HoH and the other on the block. We’ll see if there are any more twists going tonight!

Speaking of tonight, the feeds will be going live tonight at midnight est! Don’t forget to sign up here. CBS All-Access is actually a really good deal for the price. I’m not going to spend all season spamming the link, though. If you change your mind and want to sign up later, you know where to find the link (hint: on the banner on every post).

Alright, time to jump into the live blogging: